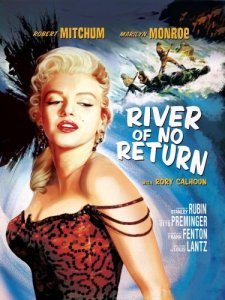 If this month has taught me anything it’s how many fantastic actors were blessed to work alongside Ms. Marilyn Monroe.  Tonight’s film boast one of the most enigmatic actors to ever grace the silver screen, in my humble opinion: Robert Mitchum!  To me, Mitchum will always be Max Cady in Cape Fear.  I feared him yet there was something ridiculously attractive about him (I know, I’m weird!).  In this film, he’s more subtle as a rancher trying to reconnect with his young son.  Directed by the equally talented Otto Preminger, River of No Return probably boasts the most diverse and spellbinding performance of Marilyn’s career.  I know I mentioned before that Niagara was the film that proved Marilyn’s talent, I have to eat crow and say it is this film!

Matt Calder (Mitchum) has recently reunited with his son Mark (Tommy Rettig) and settled down.  One day saloon singer Kay Weston (Marilyn) and her new husband Harry (Rory Calhoun) stumble on the Calder’s as they sail down the river on a raft on their way to Council City.  When Matt and Harry get into a dispute Matt is shot and left for dead.  Kay stays behind to care for the father and son and the three decide to head to Council City themselves.  As they struggle to survive on the rapids and in the rugged terrain, Kay will try to find a way to prevent Matt from killing Harry.

One thing I enjoy about Preminger and his work is how contained the stories are.  There’s no filler or sequences that don’t immediately contribute to the story.  At a very lean 90 minutes, River of No Return doesn’t waste time in drawn-out monologues spouting exposition or motivation.  You gather all that from how the characters react to the elements and their time on the river.  The hardship of traversing the rough terrain shows off what the characters are made of more so then having them talk about their feelings.

Mitchum is always solid as the rugged man of little words and his Matt Calder is a far cry from his more villainous roles like the aforementioned Max Cady or Harry Powell of Night of the Hunter (one of my FAVORITE movies that I will definitely be doing at some point).  Matt has been through losing a wife and is incredibly sweet opposite Tommy Rettig who plays his son.  In terms of male acting the biggest shock for me was seeing Rory Calhoun as the evil gambler Harry Weston.  He was pretty unmemorable in last night’s entry on How to Marry a Millionaire, but here he was the perfect blend of smarmy, arrogant, and frightening.  He genuinely felt like a threat against something like Mitchum who excels at playing the intimidation game. 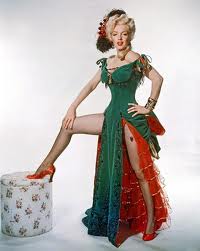 The true stand-out though is of course Marilyn who gives her finest performance as the saloon singer Kay Weston.  Her green dress recently went up for auction and I’m said I didn’t have the over 100,000 dollars to buy it (someday!) and every costume is the right amount of Old West risqué, in fact some I was surprised got past the censors.  The green dress, picture above, has a flap in the center that Marilyn throws all around during her performance, showing off some frilly red undergarments which I’m surprised didn’t get gasps from the censors at the time.  Aside from that Marilyn is the dimwitted gold digger of Millionaire or Gentlemen, nor is she the home wrecker or just flighty idiot you’ve seen in other movies.  Her character may wear revealing dresses while performing but the majority of her costumes are jeans and a shirt, a far cry from a white dress over a subway grate.  Other than her change in appearance is how tough she appears.  She realizes Harry is bad news and wants desperately to be seen as more than a tramp, something Matt assumes she is.  She’s scrappy, a fighter, and has a strong rapport with little Mark, more than his own father does.  Gone is the breathy voice and doe-eyes because Kay is aware of the effect she has on men yet doesn’t use it to manipulate them.  There’s more depth and character to her than the other actors, mainly because it’s in contrast to her persona.  This is the performance Marilyn should be praised for and its a shame that other movies didn’t highlight that more.

River of No Return isn’t my favorite of Preminger’s but it’s a bold and daring film for Marilyn and a strong addition to the Western genre!

Journeys in Classic Film My (Slightly More Than) Month with Marilyn: River of No Return (1954)
%d bloggers like this: