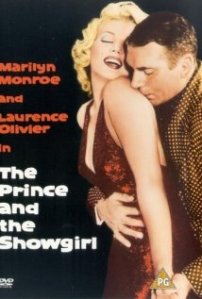 I recently saw My Week with Marilyn, the film that inspired my Month with Marilyn and the movie tells of the squabbles and difficulties associated with filming The Prince and the Showgirl.  My review of My Week with Marilyn will run in a couple of days but it’s fun to watch this movie, the finished product, after witnessing how bloody difficult it was for director/producer/star Laurence Olivier to make.  The Prince and the Showgirl is far better, and more opulent, than any of Marilyn’s past and future works.  What starts out as a lovable farce overstays its welcome by a good 30 minutes with Olivier forcibly taking over with his character.  A great film for the first hour, mediocre for the rest.

Elsie Marina (Marilyn) is a showgirl in a revue in Britain who attracts the eye of the prince-regent of Carpathia (Laurence Olivier).  The Regent invites Elsie to his home with the intent to seduce her but things go awry.  When Elsie discovers the Regent’s young son plans to overthrow him, she is forced to decide whether to tell the Regent or not.

The plot above may seem fairly dry but that’s because in an hour and 52 minutes it doesn’t seem like much happens, or it feels like there’s two very distinct stories that just never gel.  There’s the love story between Elsie and the Regent that takes up the first half, then you have the plot with the son Nicky (Jeremy Spenser) that takes up the second half.  The first half is where the fun is as the film flirts with being a sex comedy a la Doris Day/Rock Hudson.  The Regent invites Elsie to his home with plans for seduction, a relaxing “escapade” before he leaves, but Elsie is immediately aware of the situation.  Before I forget, watching this alongside My Week with Marilyn, it’s not apparent how nervous Marilyn was to work with Olivier.  In My Week you see the endless takes that go on when Marilyn continuously is unable to add an “isn’t it” to the line. 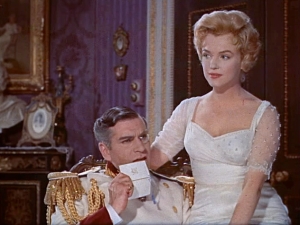 The thing to love about Marilyn in this movie is how self-aware she plays Elsie.  When the Regent shows up he immediately ignores her to make phone calls.  As you’re trying to listen to the dialogue with Olivier you’re distracted by Marilyn mocking him and having fun by herself.  As she gets drunker she becomes even funnier.  Marilyn isn’t breathy or dumb like in Some Like It Hot or other movies.  She’s also not tough-talking a la River of No Return.  The best way to describe her performance is that of a normal girl.  She doesn’t play up any type of stupidity, she’s just aware that men usually invite her to places to sleep with her.  While not cementing any acting improvement, this really highlights Marilyn as a comedienne, she’s got phenomenal comedic timing in this.  Also, I know it’s moot to say Marilyn is beautiful but she is as gorgeous as I’ve ever seen her in this film.  I don’t know what it is but she is breathtaking in this role especially.

The romance with Olivier is just odd.  There’s a lot of history with this story as it originated as a play entitled The Sleeping Prince starring Olivier and real-life wife Vivien Leigh as Elsie.  When the movie was made Leigh was seen as too old and replaced with Marilyn. Olivier was obviously trying to make himself culturally relevant in the ever-changing 50s and figured that to do so he’d have to work with the current It girl.  The problem is Olivier is far too campy in the role, rocking a ridiculous Transylvania-esque accent and monocle.  When he isn’t talking funny he’s screaming at everyone.  He also looks far too old opposite Marilyn, making it comically apparent that he’s got makeup on.

I found the first half of the film filled with humor and charm, courtesy of Marilyn mainly, but after the relationship takes a turn in the hour mark you’re expecting the film to conclude.  Instead, we get some political subplot involving the son trying to overthrow his father.  Marilyn just happens to speak German and understands the plot forcing the father and son to reconnect.  It’s ridiculous and goes on forever.  First there’s a coronation scene, then a ball, then some father/son humor (“you want another kiss?”), then the Regent plans to leave…it just drags into home.  It doesn’t make sense in the grand scheme of things and by the end you start to notice how little of a lasting relationship the Regent and Elsie could ever have.  The Regent never proves that he loves Elsie for anything more than her sexual charms, and therefore there’s no believability to the relationship.

The Prince and the Showgirl is an interesting turning point in the lives of both leads.  For Olivier it proved how out-of-touch he was with audiences and for Marilyn it proved her as a fantastic comedienne.  It’s a great film for the first hour but after that you’ll be doing other things as it finishes.

7 thoughts on “My (Slightly More Than) Month with Marilyn: The Prince and the Showgirl (1957)” Leave a comment ›