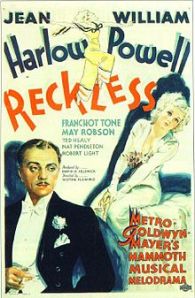 Today’s film should have been my favorite of the two box sets I’m working with, but it was just weird and I mean weird like Bombshell in that it had a bizarre tone and a really disjointed script.  The film literally squeezes in every genre of film in a 97 minute run time.  Other similarities to Bombshell will be mentioned below, but the DVD also had some issues in terms of audio quality which I’ll briefly touch on and mention at the conclusion of this retrospective when I review both box sets.  I guess this movie gets brownie points for including the FANTASTIC William Powell (I’m going back in my time machine to get that man) in his first team-up with his real-life lover Harlow…but it’s so scattered I found myself tuning out.

For a two-line review how the hell did this movie get padded out to 97 minutes you ask?  By including snippets from every major genre of movie that was out at the time.  The movie is a blatant exploitation of several elements, the first being the Libby Holman case.  If you don’t know anything about torch singer Libby Holman (I didn’t either, thanks Wiki), she was a scandalous singer whose husband killed himself yet Holman and her lover were accused of his murder.  They were later acquitted but it ruined Holman’s career.  It’s may be a spoiler but Harrison ends up offing himself around the hour mark after his ex-fiancee Jo (Rosalind Russell) gets married.  The Holman case wasn’t the only exploitation.  The film was originally supposed to star Joan Crawford, but she was replaced with Harlow.  Harlow had recently gone through some scandal after the mysterious suicide of her second husband Paul Bern (there’s numerous arguments about his death.  David Stenn’s book Bombshell does a great job analyzing all the theories), and didn’t like being associated so closely with the character.  The movie also capitalized on Powell and Harlow’s real romance.  With all these things playing against it, Reckless definitely feels like a movie capitalizing on the success of its stars, leaving the story to flounder from one plot point to the next.

With Powell just coming off The Thin Man, he’s amazing as Riley.  I’ve always loved Powell’s smooth talking charm and elegance and he makes drunk look elegant which is a feat!  If anything this film was a jumping off point for the chemistry between Powell and Harlow in Libeled Lady…because they don’t feel like they have a lot of chemistry in this.  That’s probably because their storyline is so cut and paste.  Reckless presents this love triangle between Bob, Ned, and Mona (adding another peg if you want to include Jo), yet I never got the feeling Ned loved Mona.  They spend so little time together the relationship never develops.  The movie opens with Mona’s Granny (May Robson) using Ned to get Mona out of jail for reckless driving and they have some cute moments there but that’s really it.  They talk here and there but after the 30 minute mark the movie becomes about her and Bob’s relationship.

Oh Mona and Bob’s relationship.  This the third movie I’ve seen with Franchot Tone and I DON’T LIKE HIM!  I’m sick of looking at his face because he plays the exact….same….character in every movie I’ve covered!  He plays the wealthy daddy’s boy who makes the mistake of marrying Mona.  The movie spends the second act with Mona trying to gain acceptance from Bob’s dad and his wealthy friends.  Wait, isn’t this The Girl from Missouri all over again?  I kept asking where’s Ned…well he doesn’t meet up again with Mona until the hour mark and the movie’s 97 minutes!  There’s a whole extended sequence involving Ned’s friends meeting Bob’s wealthy friends.  A joke starts when one of the wealthy girls asks Ned’s bodyguard if he’s been in jail.  He replies he’s been in Sing Sing to which the girl yells “This dear man has been to Sing Sing!”  The utter glee on her face is disturbing.  I know the joke is meant to show how stupid wealthy people are but if he had turned to her and said “for murder” I’d have found it funny and not off-putting like it is.

If you get bored with this story, don’t worry there’s about 3 more within the final 37 minutes of the film.  With Bob killing himself Mona and Ned get accused of his murder.  So we throw in a murder accusation with 20 minutes left?  Oh wait, it’s over….that only took a minute.  Well what’s next?  A custody dispute between Mona and Bob’s dad with 15 minutes left?  Oh, she offers up her part of Bob’s money and she gets him back…that took two minutes.  What the hell, did the script writers just start coming up with ideas out of a hat?  The fact that there’s a screenwriter and then three additional, uncredited writers on this script shows it’s incredibly messed up.  By the end we’ve returned to the romance of Ned and Mona….at that point I could have cared less.

With all the story padded to the finish what dominated the beginning you ask?  Musical numbers!  Yes at the last second this movie was rewritten as a musical and boy does it make the movie feel even longer.  Harlow herself was dubbed and the actress singing for her sounds good and Harlow dances great.  It’s the placement of the song and dance numbers that’s off.  The movie opens with the introduction of Mona and Ned and then leads into a ten minute “performance” of Mona’s play.  Mind you the audience only knows that Mona’s been arrested for reckless driving, and I guess she’s on the stage.  I didn’t know where the movie would be going because we have no introduction.  After the fifteen minute dance we get another one after she’s been dumped by Bob.  She does an awkward series of movements around a group of people and it makes Bob mad?  Also the final six minutes are musical numbers.  Someone really started trying to find ways to add to this script.

I have to think this was meant to be some continuation of Bombshell.  Even the names of the character Harlow plays is the same, Mona/Lola.  This was Harlow’s first flop and it feels it.  I didn’t hate it as much as Dinner for Eight but it feels so shoddily put together.  Also, my DVD had some stupid audio issues.  The actors sounded clear with my regular volume but I’d have to turn the volume down during musical numbers, screaming or other loud noises, leaving me to turn the audio up because the actors became muffled!  I can’t complain too much since the DVD isn’t a restoration and the copy is probably old but still, an annoyance in a series of problems with this film.  Watch Libeled Lady or any other Powell film and skip this reckless (get it) film.

Leave a Reply to maroon5gurl88Cancel Reply