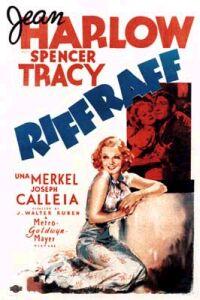 We’re entering the final year of Jean Harlow’s life and she would only make six more movies before succumbing to uremic poisoning at the age of 26.  Today’s film, Riffraff, is a melodramatic pre-cursor to her pairing with Spencer Tracy in Libeled Lady.  In many ways, the film is like Barbara Stanwyck’s film Clash by Night, which dealt with several characters and the canning industry.  Harlow does shine and is really the only reason to watch this rather bland affair.

Fisherman Dutch (Spencer Tracy) is attempting to organize his fisherman’s union as they’re rebelling and striking against their boss Nick (Joseph Calleia).  Cannery worker Hattie (Harlow) is in love with Dutch but is also lusted after by Nick.  When Dutch and Hattie get married, Hattie steals money from Nick to help Dutch and ends up going to prison, leaving Dutch to find a way to get her out.

The movie is written by the leading female writers of the day, Frances Marion and Anita Loos so it’s no surprise that Harlow’s character is the most compelling.  Again, I found her incredibly reminiscent of Barbara Stanwyck’s character in Clash by Night, in that Hattie is tough and tries hard to do what’s best for her.  Hattie starts out as a character in a love/hate relationship with Dutch that’s similar to her relationship with Tracy’s character in Libeled Lady.  Here, the characters don’t seem to gel as much as they did in that film (come to think of it their pairing wasn’t my favorite in LL either).  Their chemistry really only seems to work in service to the plot, there’s little they have in common and you never really see a love affair bloom between them (odd considering they end up having a child together).  Hattie’s relationship with Nick is more compelling as Nick tries hard to woo her with fancy clothes and dreams of elevating her from being a lowly cannery worker.  I think this would have been a far better story to focus on as opposed to what we got.

The problem lies with Tracy’s storyline, a plot I deemed “On the Waterfront-lite.”  The issues with the cannery union aren’t interesting to me and Tracy seems so refined for someone who’s deemed “riffraff.”  He comes off far too intelligent and clean to be a cannery worker and he doesn’t fit this character.  Considering in a few years he’d be great with these character roles, this is obviously an early attempt before he hit his stride.

Riffraff devolves into melodrama as not only do we deal with Dutch, but we follow Hattie in prison for stealing money.  No, this movie isn’t that type of “women in prison” film but it’s such a bland and laughable attempt at a cautionary tale and the way Hattie ends the movie never answers any fundamental questions.  Case in point, how the hell do these two plan to live happily ever after?

There’s nothing special about this movie, it’s merely a jumping-off point for the hilarity that would come in Libeled Lady.

ANNOUNCEMENTS: First off, thanks to Jessica at CometOverHollywood.com  for letting me participate in her Gone Too Soon Blogathon.  If you didn’t read my thoughts on actress Maggie McNamara go read it!  And thanks to the numerous bloggers who read the post and left me comments!  All the views cracked the blog over the 100 hits mark, the first time in March!

Also, since we only have six more films left in The Films of Jean Harlow, it doesn’t look like I’ll be getting Red-Headed Woman in at all.  I had gotten a copy from the library and it turned out to be a VHS (who knew they still had those) and there’s no other way to get a copy.  I’m still trying to get a copy but right now the odds are not in my favor so we’ll just finish out the last six.  At the end of the theme I’ll be reviewing the films and the two DVD box sets I have.  After that, the rest is up to you.  What actors, actresses, directors, genres do you want my next spotlight to be on?  I have a few more box sets I can run through (Cary Grant and The Thin Man series, James Bond) but I want more input from the readers so let me know via comments on any of the pages!