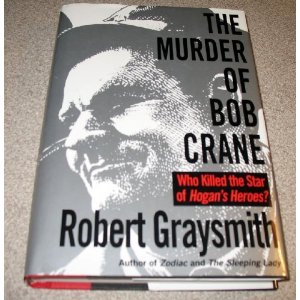 Another installment of Old Hollywood Book Reviews (I’m taking suggestions on if this title actually works or if there’s a better one out there).  Today’s book isn’t about a classic film star per se, but a crime that is always thrown out when someone mentions Old Hollywood.  I personally love these classic Hollywood murder stories.  Sure they’re said but they show a level of crime and glitz that we don’t see nowadays.  There’s plenty of classic Hollywood murder stories (and many movies about them) from the death of George Reeves to Thelma Todd and so on.  There’s actually a movie about Bob Crane’s life and death, the excellent Auto Focus which I recommend people see.  The book, I can’t recommend as highly which is odd considering it’s author, Robert Graysmith, wrote one of the definitive books on The Zodiac that was also turned into a film (David Fincher’s Zodiac).

Bob Crane was a successful Hollywood television star who made his mark on Hogan’s Heroes playing the lead role of Robert Hogan.   Unfortunately, when the show ended Crane devolved into crappy movies and possible sex addiction before he was murdered 1978, a murder which has never been solved.

The problem with Robert Graysmith’s book, The Murder of Bob Crane, is that I knew all of this already from the aforementioned film Auto Focus.  There’s absolutely nothing new in this book and that’s probably due in part to the movie being based on Graysmith’s work.  I’ll admit then, my problem was reading this book after seeing the movie.  So if you take away all of that then the book does provide some interesting viewpoints in the theory of who killed Crane, specifically citing his former friend and wing-man John Carpenter as the murderer (unfortunately Carpenter died of cancer before being tried).  It’s a pretty typical procedural style book focusing on the murder, the events in Crane’s life that led up to his current situation, and the aftermath.  It’s a scant 300 pages in a pocket-book, divided up into 3 sections of about seven chapters making it an extremely quick read (I got through it in about a week).

The issue is in Graysmith’s writing style.  This was my first Graysmith read (I have Zodiac Unmasked on my Kindle) and I was not liking the guy’s style.  I have a real issue with going off-topic to fill page length and Graysmith does that far too often.  He’ll break from the main narrative, that of Crane, and devote the majority of a chapter to a completely different person.  He details the entire life story of almost every actor on Hogan’s Heroes.  I’m not saying their stories aren’t interesting, but why are they needed?  The guys on the show weren’t suspected of killing Crane and we never hear of them again, so why do I need to know about them from birth to death?  I understand taking the time to detail Crane’s upbringing but he leaves that out, so what’s going on Graysmith?  The book itself even opens up clunkily, devoting a good chunk of the opening pages to the desert landscape of Scottsdale, Arizona!  It’s nice, I’ve been there, but what the hell does the desert of Scottsdale have to do with the death of Bob Crane….did the cactus kill him?

I’d recommend this book to anyone who doesn’t want to watch Auto Focus (and it being a hard R-rated film…I could understand those who don’t want to see all the sex and nudity) but if you really want to know about Crane then watch the film.  It’s fantastic and Greg Kinnear gives a haunting performance as Crane himself.  What’s sad is that the film does a better job of showing how sad Crane’s life became at the end, devolving into sex addiction and incriminating videotapes of his sexual conquests.  The various theories on who killed him, and why Carpenter might have done it are worth investigating, especially considering the crime won’t ever be solved.   Skip the Graysmith book, Wikipedia does a better job.