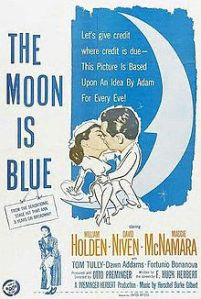 I mentioned reviewing The Moon is Blue when I did my first ever blogathon (The Gone Too Soon Blogathon) and discussed star Maggie McNamara.  It was recently on TCM (and I had NO idea TCM actually sold DVD copies of this…gotta buy one) and figured now’s as good a time as any to review it (and William Holden losing the Leading Man Tournament played a hand).  I’ve seen this controversial film over four times and I still love it.  It’s one of the groundbreaking films to rattle the foundations of the fledgling MPAA with its “flippant views on seduction” but it’s not a sex comedy.  Instead director Otto Preminger and screenwriter F. Hugh Herbert craft an unconventional romantic comedy filled with farce, misunderstandings, and yes, talk of sex.

Architect Donald Gresham (William Holden) meets the odd Patty O’Neill (McNamara) at the Empire State Building and through a series of conversations and tricks get her to come over to his apartment for dinner.  Patty says exactly what’s on her mind and is prepped for Don to attempt to seduce her.  When Don’s neighbor David Slater (David Niven) arrives and also falls for Patty, a series of events takes place that pushes the bounds of “what’s appropriate” all with a comedic sensibility.

A bit of history before discussing the movie itself.  The Moon is Blue is often cited as a groundbreaking film in the changes that would upset the Legion of Decency, shape the Hayes Code and make way for the MPAA.  Preminger’s movie is the first to use the words “virgin,” “seduce,” “mistress” (for a sexual partner), and “pregnant.”  Considering that Lucy and Ricky were still sleeping in separate beds at this point…Preminger was making some waves with his work.  Preminger ended up releasing this movie without the Production Code seal of approval showing that movies could still be profitable without their consent.

With that being said, The Moon is Blue is tame in comparison to the films released today but I can see why it was “scandalous” for the 1950s.  I mean I love Elia Kazan‘s Baby Doll which came out 3 years later and that is even more risqué.  The Moon is Blue tells a light romantic comedy that just happens to include characters who aren’t stupid about sex.  The movie is all about saying “people are not unaware of sex, so why pretend they are in entertainment?”

Patty is a woman who knows what she wants, knows exactly where her boundaries are with Don and tells him so, “I always put my cards on the table.”  For the 1950s Patty is a pretty progressive female and Maggie McNamara plays her with a child-like innocence; ironic considering she’s very overt about talking about sexual seduction.  She talks a mile a minute (David hilarious tells Don he’s been there ten minutes and “she never stopped talking), is constantly asking questions, and talks to strangers whenever she wants.  When Don leaves to get dinner she opens the door to whoever and invites them inside.  When Don’s ex-girlfriend Cynthia (Dawn Addams) knocks on the door and sees Patty she leaves in a huff.  Patty says she’s “rude” and doesn’t understand why Cynthia wouldn’t want to come inside.  I’ll be saying this a few times in this review, but if this were any other type of movie Patty would be extremely annoying and/or an overly trusting victim.  When David graciously offers Patty $600 she says “no one can misunderstand” his intentions.  Cut to Cynthia listening right outside and catching that lone line.  McNamara is like Audrey Hepburn in a lot of ways (appearances aside) but in comparison to Audrey, Maggie had a more worldly way about her.  She knows what people are like, but that’s no reason to not give them the benefit of the doubt for a moment.

The two male leads of the cast are just as amazing and are up to the task of keeping up with Patty’s mile-a-minute personality.  We first meet Holden’s Donald Gresham and this was the third William Holden movie I’d seen and I have to say he’s at his MOST seductive here!  The entire first act is him trying to figure out how easy Patty will be to seduce, but even then he’s a complete gentleman about it.  I’ve always said that Bill Holden is the type of man who could trick you into bed but you’d never be mad at him because he’s so damned nice and charming!  Again, if this were another film Don would be a lecherous stalker of some type.

He follows Patty up to the Empire State building (and oddly enough no one’s up at the observation tower but them) and breaks a button, hides a needle, and tells Patty to come down to his office (who wouldn’t want to be stalked by Bill Holden ladies?).  Once there it’s a quick cab ride to his apartment before Don’s putting the moves on Patty.  When Patty asks to take off her shoes, Don slyly says “Take off anything you’d like.”  It’s a very quick moment and opens up the door to the possibilities of what could happen for this couple and yet Patty is hip to his game.  Patty O’Neill is the only movie character I’ve seen able to withstand the charms of Bill Holden!  She tells Don he’s not her type and while she understands his shtick, she’s willing to go along with it to make him happy!  There’s even a moment where Don starts nuzzling Patty and she still pulls away (I envy this girl and her willpower).  By this point the sexual tension is thick but the expert blend of humor and snappy one-liners pushes the movie away from being some crazy sex farce.

The film truly is taking all the preconceived notions about romantic comedies, sex, and the double standards of gender, and turning them on their ear.  The film opens with the typical romantic genre trope of two potential lovers constantly missing each other but from there the movie envelops the tropes in with the one-liners and a story where the girl is so unconventional either man stands a chance of winning her.

It’s the takes on gender where the satire of the film is the sharpest.  I’ve discussed Patty’s character already but she is a girl that’s quite frank about how it’s ridiculous to assume women aren’t sexual beings.  Throughout her date with Don she’s asking him about his relationships, and if he has a mistress (under the assumption that most men do…going even further to hit the notion that men aren’t monogamous).  Don finally gets fed up with her and says “why are you so preoccupied with sex.”  Patty’s candid reply is “Don’t you think it’s better for a girl to be preoccupied with sex than occupied?”  No truer statement has ever been uttered, and from a movie made in 1953!  Patty’s character isn’t a slut, but considering her actions in the film so far for the time period she would be.  Throughout the rest of the movie she’s found in perfectly logical, albeit compromising positions and when her father shows up the standards are brought into sharp focus.

That’s not to say the men don’t address their own stereotypes, although in this instance they’re playing up to them as opposed to proving them false.  When they’re all eating dinner David and Don try to open a ketchup bottle as a show of strength.  Of course neither man can open it and Patty does only to have David get ketchup on her dress (and most prominently on her breast).  David goes to wipe it off before noticing what he’s doing, Patty’s look is just priceless!  If anything Don and David are far sluttier than Patty.  Don sheepishly admits that he “picked” Patty up with the intent of sleeping with her whereas David is a womanizing divorcee with no control over his own daughter.  In fact, David’s entire reason for visiting Don’s apartment is to “horsewhip him” for NOT “trying to seduce my daughter.”  The surprising turn of phrase hides the joke but yes, David’s only able to come to his daughter’s defense because she didn’t sleep with Don!  David himself has been recently discovered by Cynthia “tight and with a young lady” to which David responds “Yes she was young!”

We can’t forget David Niven in this film!  I’m not a huge connoisseur of Niven’s films but I adore him in this (although I tend to confuse him with Peter Sellers).  His character, David Slater, is more on Patty’s wavelength in many ways.  He takes all of Patty’s assertions literally like when Patty asks him if his daughter is pregnant.  Of course, David doesn’t know his daughter well enough and freaks out believing she is.  Where Don answers Patty’s multitude of questions, David simply asks more questions.  David is also the character who actively tries to change his personality by the conclusion of the film.  In many ways the relationship between him and Patty is one of father/daughter, or at least of a man trying to be a better father.  By the end he resolves to keep Cynthia on a tighter leash to hilarious results.

For a film that tries so hard to buck conventions, the ending is a deus ex machina/highly typical trope of the comedy genre.  It’s generic and considering all that’s come before it’s a taste unbelievable but Preminger does his best to soften the blow with Don’s final words (and the final lines of the movie being) “it happens once in a blue moon.”  And that’s all that’s needed to make you love The Moon is Blue from beginning to end.  This is probably my favorite of Preminger’s films.  The Moon is Blue is sweet, witty, biting, and holds three amazing performances from Maggie McNamara, David Niven, and William Holden.  It’s a must-own!