There’s far too many pictures of Natalie Wood in the universe so the photos I’ve used are only a small portion showing off the beauty and grace of Ms. Natalie Wood.  Natalie would have been 74 today and who knows where she might have been had she continued to make movies.  Sadly, modern viewers today would only know her due to her tragic death which has been “reopened” under tawdry circumstances and unceremoniously abandoned.  I have my theories on her death which I won’t share here but regardless Natalie put out a glorious body of work that I can rewatch time and again.  I’ll count down my top five favorite Natalie Wood films and include some gifs and pictures (there’s a reason she’s one of the inaugural actresses in my Hall of Fame).  Happy birthday Natalie, wherever you are!

This is low on the list because I’ve only seen it once and that was during last Christmas’ 25 Days of Christmas.  I’ll definitely watch it again this year and boy is Natalie adorable!  Sure there are stories about the horrors her mother placed upon her to get a good performance but regardless Natalie just played the role as a little girl with no airs.  She never felt like she was “acting” and it’s evidenced in this Christmas classic.

4.  Rebel Without a Cause

Rebel Without a Cause was the third Natalie film I ever saw and while I don’t give it the undying praise many others do to me it’s all about Natalie.  She’s a girl trying to find fatherly affection and growing up too fast because of it.  She tries so hard not to care when she cares the most.  The film is a stark portrait of the American teen in the 1950s trying to create their own family and Natalie imbues Judy with a hunger for affection and love. 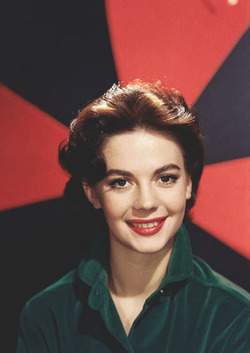 3.  Love with a Proper Stranger

I REALLY wish this was on DVD and it baffles me that out of the thousands of DVDs that come out every year this is still only available on VHS.  If you haven’t seen it the film follows a young couple who have a one-night stand.  The girl (Natalie) winds up pregnant and needs the guy (Steve McQueen) to pay to “take care of the problem.”  For a story with a pretty grim turn of events you don’t expect to find a love story within it; especially one that doesn’t feel born out of pity.  Fortunately, McQueen and Natalie sell the story turning a disturbing look at sex into a story of finding romance in unpredictable situations.  Someone release this on DVD!

For the first Natalie Wood film I ever saw this only ranks second.  It’s got its flaws from the fact that Natalie is dubbed during songs and/or she just gets a dark tan and she’s from Puerto Rico but who cares!  The immortal love story of Tony and Maria is timeless.  The songs are great and the moments with Rita Morena as Anita and Natalie are sweet.

1.  Splendor in the Grass

The second Natalie film I saw is my favorite. It’s easily going in my top five favorite movies of all time!  To me the love story between Deenie and Bud (Warren Beatty) is better than Tony and Maria because it’s realistic.  Not only do these two kids have societal constraints placed upon them in terms of wealth but the idea of being a teenager in rural America during a time where sex before marriage is the worst taboo.  I joke that this film is “90 minutes of Natalie Wood being driven insane because she wants to screw Warren Beatty” but I think the fact these two dated after this makes the relationship more compelling, you’re seeing it as they lived it.  Such a beautiful movie!

I’m including this gif from Gypsy because I love it!