I think I’ve finally settled on a proper title for this column!  Everyone give a round of applause to Biopic Theater (and if you don’t like it, I dare you to come up with something better).  This week’s film is a Howard Hughes biopic that isn’t The Aviator.  The Amazing Howard Hughes is a 1977 film that had some clout behind it when Warren Beatty turned down a million dollars to play the role.  I think he made a good choice because The Amazing Howard Hughes is anything but.  Sure it’s interesting, and goes into detail on things that The Aviator didn’t, but boy is it boring.  Tommy Lee Jones doesn’t help as the monotonous invocation of Hughes himself, but the script reads like a technical how-to guide of Hughes’ accomplishments with little interest in any of his Hollywood background or his personal life.  If you want a surface reading of who Hughes was, with a heavy dose of his later years, then you’ll find something to enjoy here.  If you want actual depth on the man, seek other avenues.

Howard Hughes (Jones) is an eccentric billionaire who dreams of conquering Hollywood and aviation.  As he becomes older his paranoia starts to get the best of him, leaving him to be an isolated, lonely man.

The Amazing Howard Hughes is filled with made-for-TV veterans that should give audiences a clear indication of what they’ll be getting into.  The film is directed by William A. Graham who directed gems like Return to the Blue Lagoon and The Hunt for the Unicorn Killer.  Screenwriter John Gay has several teleplays under his belt, and his biggest credit is as writer for The Courtship of Eddie’s Father.  We do have source material for this biopic, as it’s based on Hughes confidante Noah Dietrich‘s book Howard: The Amazing Mr. Hughes.  The film actually explores the relationship between Hughes and Dietrich in a way that The Aviator doesn’t.  The two have a precarious relationship, and as the film asserts, when Dietrich left it was less than cordial.  It probably explains the film’s accusation that Dietrich sold out Hughes to a biographer (although Hughes openly lies to a group of reporters to denounce Dietrich, so neither character is perfect).  If anything, The Amazing Howard Hughes does focus on a few areas that aren’t covered in The Aviator including Howard’s later years filled with paranoia and a slow death.  Towards the end Hughes lived his life like a character in a spy novel; having handlers call guests to lead them to where Hughes was, only to have him talk to them on the phone.  Although it is hard to take Hughes’ death seriously when Jones is made up to look like the Geico cave man.  I’m not sure why they believed Hughes as an old man equated to a brow line so pronounced he becomes a cousin to early man.

For all this exploration of Hughes’ life the film is remarkably distanced from the man himself.  The highlights of Hughes’ persona are explored from his interest in aviation, his dabbling in Hollywood production, and his eventual run-ins with United States senators.  The Aviator told all of that in three hours and kept things lively.  Here, there’s no life or movement.  At two hours and three minutes, every minute is felt because the movie never stays in one place for long, and when it does settle its characters sitting down and talking. The film never feels interested in Hughes life in Hollywood, in fact Hell’s Angels and The Outlaw fill up about ten minutes of screen time.  His innovative filmmaking on Hell’s Angels is never described, and the only scene from The Outlaw included involves Jane Russell’s chest.  Apparently, Hughes is unavailable to “photograph” it for reason unknown, and after a ridiculous zoom into the actresses breasts, the film is never mentioned again.  The Amazing Howard Hughes is ultimately a two-hour business course on Howard Hughes. 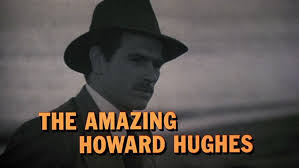 There’s also nothing mentioned about Hughes’ personal life, I guess for fear of us getting to know the man at all.  The first half of the film is peppered with unnamed women who I guess are unimportant because they come and go, and again they don’t have names.  Jean Harlow has less than a minute of screen time (although Hughes comes up with the idea to make her blonde supposedly), and Ginger Rogers is mentioned but never seen.  The only two female characters given more than five minutes are Billie Dove (Lee Purcell) and Katherine Hepburn (Tovah Feldshuh).  Dove takes a walk with Hughes, mentions she’s married, and disappears.  Hepburn has a few extra scenes with Hughes, but literally says she has to go…and does.  The actresses pretty, but they don’t have enough time to make an impression.  Feldshuh seems to be a good Hepburn  for how little interest the film has in her.  The film doesn’t even include Hughes’ marriage to Ella Rice, and Jean Peters is seen walking past the camera.

I guess if I had to choose who to play a dour, eccentric, serious millionaire I’d pick Tommy Lee Jones as well.  Unfortunately, he adds to the snooze-worthy quality of this film.  Original actor Warren Beatty would have been a vivacious Hughes for sure.  Jones is just dour.  He doesn’t really give a performance so much as walk around and read the dialogue.  I’ve seen Jones act.  It doesn’t happen often, but it does…just not here.  For a man purported to have done so much Jones looks like he couldn’t care less.

From the laughable, spliced in plane crash footage, to the aforementioned make-up, The Amazing Howard Hughes is a tough two hours to sit through.  I know a lot of people who dislike The Aviator, but I never found myself bored with it.  I’ll give my thoughts in-depth when I review that film proper.  I recommend watching that film, or reading a Hughes biography.  If you’re interested in Hughes’ later life and his business acumen then by all means, seek this out.

1970s, Biopic, Drama, Made for Television