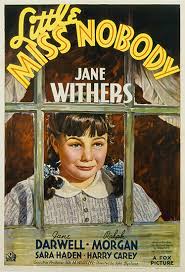 The next four days will be devoted to the films of actress Jane Withers.  Why, do you ask?  A) Because I got a mess of her movies that I want to review and B) because the reviews lead up to my full interview with the star.  (I feel pretty proud to have nabbed an interview at all).  Since her movies generally run an hour or so, and because the Fox Archive DVDs lack any bonus content, I’ll be doubling up on reviews.  The first two movies spotlight Withers at her youngest, and poise her as a tangible Shirley Temple substitute (of which Withers said she never wanted to be).  Let’s kick off Four Days with Jane – I just came up with that – with Little Miss Nobody and Paddy O’Day.

Little Miss Nobody follows orphaned Judy Devlin (Withers) who escapes living in a reform school and meets up with a kind man (Ralph Morgan) involved in shady business dealings.

When I say Withers’ early films poised her as a Shirley Temple clone, I point to Little Miss Nobody.  I mean, even the title sounds similar to Temple’s Little Miss Marker!  Thankfully, there’s nothing similar to Temple’s work other than the title and the general idea.  In watching all of Withers’ work, I find her to be a genuine, real-world little girl; I could never envision Shirley being placed in any of the situations Withers was in and not come off like a china doll.  Withers is the average American child, a lovable scamp in comparison to the idealistic Temple.  Withers plays pranks on those who “have it comin'” and only apologizes when she realizes she’s done wrong.  The only slight I noticed with Withers were the over-the-top vocal affectations that did feel similar to how Temple talked, although I found Withers to be channeling Carol Burnett more than Temple.

As for the film, Little Miss Nobody is a simple (only 70-so minutes) story about a little girl finding her family.  Judy does bad in the name of the good, such as switching name tags on a box to get her best friend adopted by a wealthy man, or stealing food for the orphan children’s Thanksgiving.  The only one who sees Judy for the sweet girl that she is is the kindly maid (Jane Darwell).  The movie is filled with a few song and dance numbers (another Temple trait, although Withers’ songs are modern in a way that Temple’s aren’t).   The narrative doesn’t pick up until Judy is sent to reform school – there’s realistic consequences in this movie! – and finds a man she hopes will be her savior.  Withers and Morgan take on an Annie/Daddy Warbucks scenario without the excess money and with an added dose of crime.  The actual ending is far too “Little Princess” with Judy’s birthright being discovered and the young girl forgetting about all the events that happened, but being only 70 minutes you have to make an exception there.  Little Miss Nobody isn’t as good as the other movie in this review, but it’s a fun, early foray into the marketing of Withers as a Shirley Temple-esque character, and I’m glad she never became an outright copy! 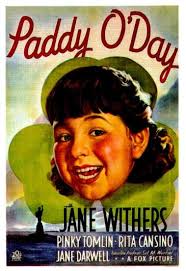 Next is Paddy O’Day starring a very young Rita Cansino (you’re not a true classic film fan if you don’t know that pre-Hollywood name!).  Paddy O’Day tells of an immigrant who arrives in the U.S. only to discover her mother is dead.  She goes to the wealthy family who employed her mother, and hopes that her loveable ways will inspire them to keep her.

Paddy O’Day’s claim to fame is that 17-year-old Rita Hayworth is present, and she is just as gorgeous here as she would be in Gilda!  She plays Tamara, a Russian immigrant and best friend to Jane’s Paddy.  Again, at only 73 minutes, the story founders in slapstick comedy but it’s entertaining due to how well-down Withers and Hayworth are.  Withers puts on a highly convincing Irish accent and exhibits strong comedic timing; when her dog starts barking on the ship she smiles and says, “sausages.”  The story is similar to Little Miss Nobody, and a few other Withers films, in which we’re meant to make fun of the wealthy.  Here, Paddy stumbles into a family who are the stereotypical selfish rich; they worry about the cat before worrying about their children.  The only member of the family with a heart is the bumbling Roy (Pinky Tomlin) is a bizarre combination of idle rich and country bumpkin.  Tomlin isn’t much of an actor and he’s nowhere near good enough for the beautiful Hayworth.  Hayworth is exotic and innocent but she does lose that Russian accent quickly.  I enjoyed Paddy O’Day, especially in comparison to Little Miss Nobody, especially for the sweet relationship between Withers and Hayworth.  A fact: Hayworth and Withers were great friends (as Withers was with several other actors in her films), and Withers gave the eulogy at Hayworth’s funeral.

Ronnie Rating for Little Miss Nobody: