Twilight Time is ambitious for putting out a critically excoriated (at the time) Sam Peckinpah film, but they have and I applaud the effort.  While I didn’t adore Major Dundee, and it wears its problems sewn into its sleeve, there’s something to admire in its scope and tenacity.  Containing an extended edition, which helps solve several of the narrative problems, Twilight Time puts forth another excellent lost-gem worth picking up.  **This review kicks off a series of films as part of my unofficial Father’s Day Gift Guide!**

Major Amos Charles Dundee (Charlton Heston) leads a group of Confederate prisoners, Army regulars, and thieves into Mexico to hunt down a vicious Apache leader whose been raiding and pillaging villages in Texas.

It’s been well-documented that I’m not a fan of Westerns, so as always, this film was challenging.  However, despite it’s flaws the movie is a sprawling story of expansionism, prejudice, and obsession that’s worth it for fans of Sam Peckinpah.  The story of Major Dundee and his men is reminiscent of Lawrence of Arabia – Peckinpah’s direct inspiration – as well as Moby Dick with Dundee as the staunch Ahab figure.  Peckinpah assembles another ragtag group of disparate people and puts them on an adventure in which all their personal faults are revealed; shades of the Wild Bunch are apparent despite that being off by another four years.  I will admit my favorite Peckinpah film is the emotionally disturbing Straw Dogs, but there’s definitely comparisons that can be made between that film and this; both focus on obsessive men losing their footing in a land they once owned.

The director’s noted for his machismo, and here the men are men; and by that I mean they’re lacking in sympathy.  Heston is the fearless leader who ends up losing his way in the third act, while James Coburn (I cannot escape Coburn of late) is the one-armed  tracker with his shotgun at the ready.  Heston is the man you’re meant to sojourn with, and while I never cared for him as a person, he’s reliable as the man of scruples.  He starts out the film with an ideal, to take down Sierra Charriba (Michael Pate) as a way of rectifying his failures during the Battle of Gettysburg.  As events unfold, Dundee loses his way and becomes a drunken lout who has further to go on his way to redemption.  When he declares, “My executioners will have to stand in line,” he means it!  Heston is tough, and yet he presents his vulnerability throughout.  He’s well put together but I found him outshined at every turn by Richard Harris as Dundee’s frenemy Benjamin Tyreen.  The animosity between the two men moves beyond friendship into a weird obsessive love, complete with Harris rocking eyeliner throughout.  Tyreen is the one who doesn’t mess around, and understands that Dundee is playing the game all wrong.  He mocks the leader, “When are we gonna stop fighting this Indian on his own terms?”  You understand Tyreen was once a leader, and as the story progresses he starts to look like a better leader than Dundee.

The strongest theme in Major Dundee is that of isolation.  The men are dwarfed by the vast expanse of land as they start hunting down Sierra, and by their own antagonism towards each other.  When Dundee recruits for his mission he’s gathering men who aren’t just convicts, but Confederate convicts; thus kickstarting a series of hostilities before the men even leave for Mexico.  While Peckinpah wasn’t commenting directly on the Vietnam War yet, there’s certainly claims to be made regarding the Civil Rights Movement and the growing divide between Americans.  You don’t sympathize with the Indians, who come off as the definition of the word “savage.”  Unfortunately, Peckinpah wasn’t able to film the opening massacre, so the movie confusedly starts with two lone scenes of Indian savagery and that’s your establishing shot.  The Indians are as stereotypical as it gets, but the men in Dundee’s outfit aren’t any better, proof that it’s not an inherent difference between races, it’s humanity itself.  Each man has his own motives to go out and fight, whether it’s for money or Dundee desiring a promotion (“Are you pursuing the Apache, major?  Or a promotion?”).  When the group rides out the Confederates and Union soldiers solidify their ranks by singing their own regimental ballads (“Dixie” and “The Battle Hymn of the Republic“).

Major Dundee isn’t without its flaws.  I’ve mentioned how savagely racist the Indians are written; you’ll be taken aback to hear one of the Indian scouts declare himself “a tame Apache, a camp dog” to prove his loyalty.  Also, it wouldn’t be Peckinpah without a few women characters who show up to be lovely, and big-bosomed, set decorations.  Senta Berger is gorgeous as Teresa Santiago but she’s only there to be a love interest to Dundee and to be heart-broken when he cheats on her.  The extended cut adds fourteen minutes on top of the theatrical cut, and the biggest addition is a sequence introducing Tyreen who just shows up in the original cut; the rest of the scenes flesh out character development.  The problem is that while time feels like it’s progressing through the epistolary format of Lieutenant Graham’s (Jim Hutton) diary, events feel scattershot and assembled by chance.  The extended cut cements sequences better, but you can feel the studio tampering and things could have been tighter had Peckinpah been allowed to film a few more sequences. 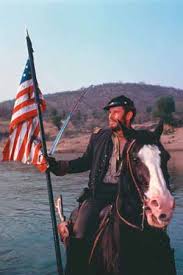 The Twilight Time Blu-ray is a two-disc set that gives you your money’s worth.  I’ve mentioned that the series comes with both the extended and theatrical cuts; I recommend watching the extended to get the full breadth of Peckinpah’s vision, so much as it is.  The extended cut also has a thundering new score composed by Christopher Caliendo, which comes as an isolated track on the disc (a Twilight Time staple).  There’s also an audio commentary track with film historians Nick Redman, Paul Seydor, Garner Simmons and David Weddle that I urge you to listen to.  The men are all Peckinpah scholars and considering the convoluted history of the making of the film, each man has their own perspective on how events played out.  If you want a grander understanding of the movie, watch this alongside.  Disc one also has a 2005 trailer for the extended re-release.  On disc two you have the original cut which is a muddled mess; it’s worth watching for the sake of comparison.  You also have the isolated score that accompanies the original cut.  Composer Daniele Amfitheatrof creates a bizarre amalgamation of sounds that are nowhere near Western.  As mentioned with the theatrical cut, it’s worth listening to for comparison’s sake.  There’s also an exhibitor’s promo reel, an extended scene, an incomplete scene, and the trailer; these are all rather short and while interesting have little rewatch value.  And let’s not forget the fantastic Julie Kirgo who crafts an essay about the tortured history of filming the movie, as well as exploring why it deserves a place as one of Peckinpah’s best, or at least most beautiful failures.

Major Dundee is a magnificent experiment in the strengths and weaknesses of the Western genre in the 1960s.  The acting, particularly from Heston and Harris is exemplary, and the violence is certainly on the weaker side for Peckinpah.  The story is lengthy and hard to grasp, but the extended cut has smoothed out much of the rough edges.  If your dad is a classic film fan, it’s worth getting a copy of this from Twilight Time!