Over the next few days, I’ll be discussing and reviewing the latest crop of Blu-Ray releases from the fantastic Twilight Time Studios.  If you haven’t bookmarked their site, Screen Archives, do so now because they’re the go-to place for quality Blu-Rays of classic films.  In the interest of full disclosure, yes, they have sent me free copies but I wouldn’t bother to be saying this in the opening paragraphs if I didn’t believe in their quality.

The first Blu-Ray on tap is the 1983 John Carpenter film, Christine.  I’ve never seen Christine prior to this, and I had hesitations due to the last few times director John Carpenter’s been reviewed here.  (My reviews of Village of the Damned and In the Mouth of Madness in case you want to read my original thoughts.)  Thankfully, Carpenter didn’t seem to lose his touch till the 1990s, and Christine is a testament to what the man can do when his game is on.  A classic bit of B-grade horror that doesn’t rely on gore, but employs a psychological angle to tell of a sentient 1958 Plymouth Fury and the boy she loves.

Arnie Cunningham (Keith Gordon) is a nerdy high-schooler who finds the car of his dreams.  The problem is, Christine (as the car is affectionately known as), doesn’t like to share her owner.  As Arnie finds a newfound confidence, courtesy of Christine, the car decides to take matters into her own hands to eliminate the competition…including Arnie’s friends and girlfriend.

Christine has entered the lexicon as a car that appears to change their owner; that, or a car that just doesn’t want to work.  It’s a silly premise, but if anything author Stephen King could make it terrifying (although Carpenter and screenwriter Bill Phillips did take liberties with the source material).  Julie Kirgo, who continues to write charming analyses included with the Blu-Ray, describes Christine as a “nihilist vision of pure evil without human responsibility.”  It’s a true statement because Christine’s origins are never explained.  The movie opens with her coming fresh off the assembly line, the lone cherry red car in a sea of beige.  To the bluesy strains of George Thorogood’s “Bad to the Bone,” the car claims its first victim.  All the explanation needed to understand the car is presented: there is no origin, she’s simply born bad.  With the turbulent 1970s coming to a close, and the consumer driven 1980s coming in, searching for explanation in events is seen as futile.

The entire premise of Christine makes a mockery of the demographic that would rise to prominence in the 1980s with their love of the mall and video games: teenagers.  Specifically, teenage boys.  Arnie and his best friend Dennis (John Stockwell) are introduced as typical sex-obsessed young men with the world at their feet; at least that’s the case with Dennis who evinces the chisel-jawed jock of all high school movies, the “white knight” that would be a young girl’s dream although his dialogue doesn’t present that as the case.  Arnie, though, is different from the other boys.  His sexual repression is internal – he mentions getting in trouble for spelling “fellatio” during a family game of Scrabble – and he doesn’t want to have meaningless sex to “get it over with.”  I cringed a fair bit at the misogyny that’s present in this movie, and I’m fairly certain that’s the point.  Dennis, his friends, and the school bullies, all view young girls as sex objects that are either easy conquests, or can be tricked into giving it up.  Arnie is the one gentlemen of the school, and it is through Christine that his inner Neanderthal comes out bent on ruining his relationship with Leigh (Alexandra Paul).  When Christine is assaulted and beaten by Buddy Reperton (William Ostrander), and his gang of thugs, it’s almost depicted as a gang rape; which Kirgo agrees with.

The relationship of boy to car is explored brilliantly in Kirgo’s essay with the thesis being that through Christine, Arnie becomes a sexual being, and loses his virginity, by proxy, with the car.  The relationship between Arnie and Christine is presented as doomed from the start.  The minute he opines, “I’ve found something uglier than me.  And I can fix her up” it’s over.  Has a relationship ever worked where one person hopes to change the other?  Christine slowly becomes a person, to the point that you don’t find it odd to refer to her as a specific gender.  When Arnie’s parents say he’s been out with “that car,” it could just as easily be replaced with “girl.”  The script integrates this insidiously into events, saturating the characters so that they all believe the car is an extension of Arnie, fusing into him to become one.  (The idea of fusing with something out brings up the influx of “body horror” movies that would mark the 1980s like Cronenberg’s The Fly or Dead Ringers.)  I have to give it up to Keith Gordon for how he goes full-bore into the role of Arnie.  Gordon went on into directing later in life (directing one of my favorite underrated musicals, The Singing Detective), but he is authentic in the role.  He conveys the frustration of young adulthood without devolving into whining.  His confrontation with his parents over buying the car isn’t a teen stomping his feet, demanding his way, but explaining that he’s done the right thing, been the good boy, and he wants something to reward all that.  His parents don’t understand him, and worse, don’t appreciate how different he is from the other boys.  When he talks to Christine, it doesn’t feel weird or stupid – a boy talking to a car; he’s a boy talking to a girl.  Oddly enough, we don’t see the initial courtship between Arnie and Leigh, but we see several scenes of courtship with Christine.  When Arnie eventually falls into madness it’s just a perfect blend of script and acting.  It’s a monologue that’s been building, not just since the movie started, but since Arnie was born.  Gordon performs it like he’s been waiting to get it off his chest his entire life.

The other actors are just as engaging, but Gordon is the star for a reason.  Stockwell is a likable personification of the high school experience (he would go on to direct, as well, making a guilty pleasure of mine, Into the Blue).  The friendship presented between Arnie and him is genuine and developed without needing to be explained; however, it’s different at school.  Arnie and Dennis don’t have the engaging connection in the car on the way to school as they do once they step on campus.  Dennis still has his friend’s back, such as when Repperton starts picking on Arnie, but a distance is felt.  Dennis is the best friend that every parent loves, and the humor comes from when he’s presented as a total failure; “You should have tried harder.”  The fact that Arnie’s rise comes at Dennis’ downfall possibly introduces the idea that nerds were the true heroes, another growing trope of the 1980s.  Alexandra Paul is a cute girl, but Leigh has zero personality other than being “the girl.”  There’s a beautiful scene of the car lighting up from the inside as it tries to kill Leigh, but it’s frighteningly gorgeous in spite of Leigh’s presence.  I can’t necessarily judge Paul’s acting because her role is negligible in the film.  (Although the script briefly explores the male competition to date her in the beginning.)  Ostrander as Buddy Repperton provides the total camp of the movie, as a Danny Zuko ripoff who looks like he was in high school four decades ago (no offense).  He’s the perfect villain whose comeuppance you’re yearning for from minute one, and boy does he get it! 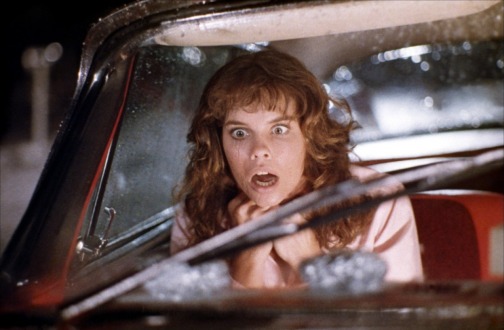 Repperton is the catalyst of the movie, effectively kick-starting the plot of the movie.  After the attack on the car, Christine rebuilds herself (presented as a sly “striptease” for Arnie complete with lusty music) in a fantastic bit of movie magic, to go on a rape revenge quest to kill those who wronged her; think of I Spit on Your Grave meets Wall-E or Short Circuit.  You KNOW you want to see that movie!  Christine engulfed in flames comes to personify the “bitch on wheels” who lays a serious beat-down on Repperton and his boys.  When Christine ends up killing a close friend of Arnie’s, a man who wasn’t perfect but certainly an ally, the boy comes to the realization that Christine is not avenging him at all.  Arnie pathetically asking “why” isn’t with regards to Detective Junkins’ (Harry Dean Stanton) answer to the man’s cause of death, but to Christine for why she had to kill him in the first place.  From there, it’s a slow descent into madness for Arnie, leaving Dennis and Leigh to become the titular heroes and save the day (with a provocative image of a bulldozer continually rolling back and forth on top of Christine).

In terms of the Blu-Ray itself, it’s more than worth it!  The sound quality struck me in comparison to the video quality (which is also fantastic), as it seemed to be utilizing speakers I never realized were there!  The essay by Kirgo has a beautiful stylized cover, and that I recommend is worth a read (if you enjoy the Criterion essays, these are simpler but just as informative).  Christine also has far more bonus content than past Twilight Time releases.  I do wonder how much was borrowed from past DVDs, though, because I’ve heard that the deleted scenes were on other releases, so if you have this on DVD already you might have these.  The deleted scenes are good, but it’s easy to see why they were deleted.  Other features, titled “Ignition,” “Fast and Furious,” and “Finish Line” deal with various methods utilized to make the finished product.  They’re all relatively short and fascinating if you’re interested in the technical elements that went into the movie.  The highlight is the audio commentary with Carpenter and Gordon.  The two have chemistry and mix the technical with the anecdotal.  They do fall into “I’m a director, too” mode which can detract from what’s on the screen, but you can’t get any better than having these two discuss the movie as you watch.  A typical Twilight Time feature is the isolated musical score.  It’s good to listen to, but is only the score composed for the film and doesn’t have any of the rock ‘n roll tracks. 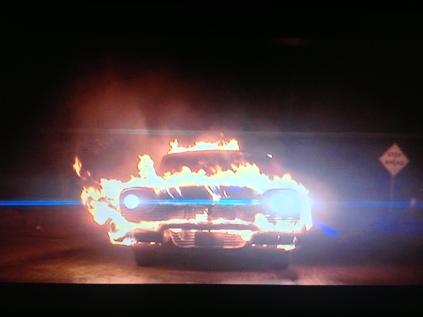 I’m hoping to keep these reviews as contained as possible, and I have a lot written about this movie.  I’ll cap everything off by saying, go watch Christine!  Gordon is amazing, the story and plot aren’t going to give you nightmares, but it presents a contained story about the horrors of growing up and the fears of commitment ..to a motor vehicle.

Twilight Time is sold out of the Blu-Ray, I am including the link to the original DVD release.