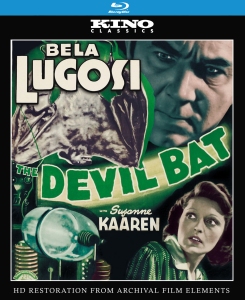 Kino Classic continues to champion the underdog with their recent Blu-rays, and while The Devil Bat isn’t necessarily worthy of the Blu-ray treatment, its heart is in the right place.  The Devil Bat’s greatest legacy is showcasing Bela Lugosi‘s limited range of characters and acting style; the former the fault of the studios, while the latter is sadly all Lugosi.  Matters aren’t helped by an incredibly short runtime, and bargain basement production, all funded by a Poverty Row studio (easy to see why they were on said row).  The audio commentary included with the disc provides insight, and the cheesy premise is good for riffing, but The Devil Bat lacks any bite to make it memorable.

Dr. Paul Carruthers (Lugosi) enlists the help of a genetically altered bat to off members of a family he feels has slighted him.  When the “devil bat” gets media attention, two reporters go off to solve the mystery.

The Devil Bat has a “so bad it’s good” premise mired in seriousness and monotony.  The movie starts with some interesting silent film touches as Lugosi stalks through his laboratory.  After the initial sequence, Lugosi’s character sets up the premise and the rest of the 68 minutes is devoted to watching people get hit in the face with a rubber bat.  If it wasn’t acted with grim seriousness it could be an entertaining watch.  The issue lies in what little set-up there is.  Carruthers’ victims are all members of one family, and he’s continually around said family after they’ve been attacked, yet no one figures out it’s him?  By the hour mark it becomes ridiculous watching the script struggle to move away from him, as if they’re purposely ignoring him.

Complicating matters is the rest of the cast, all of whom are woefully underwhelming.  Lugosi is a precursor to Arnold Schwarzenegger, playing a character meant to be American and failing (the name Paul Carruthers makes you wonder how far down the totem pole Lugosi was).  On top of that, Lugosi continues to exhibit limited range and personality.  His accent notwithstanding, Dr. Paul Carruthers is no different from the countless mad scientists he played previously.  In fact, the character Lugosi plays is almost a carbon copy of his character from The Raven (read my original review if you want to compare).  He is made up to look older, and you can see time already eroding his appearance, but other than the change physically his character is stock.  The rest of the actors are equally one-note, or outright hammy.  Suzanne Kaaren is pretty, but her role requires physical attractiveness alone; the two reporters must have stumbled in from a Poverty Row comedy because they jar you out of the horror entirely with their Keystone Kops antics.

The standouts of the Blu-ray are the great picture and the audio commentary.  It’s always great to see movies restored, and while I wouldn’t fight for this one to see a DVD release, the picture is fantastic and shows no sign of advanced aging or deterioration.  The audio commentary by historian Richard Harland Smith provides necessary insight on the movie’s production, Lugosi’s acting, and the movie’s success for the studio.  He’s certainly more animated about the movie than the film itself.

Overall, The Devil Bat fails to provide any true horror or entertainment.  I applaud Kino for taking this forgotten film and giving it the proper treatment, but there’s really nothing to recommend it other than if you’re seeking to view all Lugosi’s works.