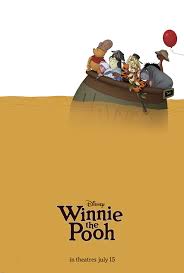 The home stretch of the Disney Vault has arrived, and by the end of this month I’ll be putting this series into its own Disney Vault.  We’re not there yet – three more movies to go – and this week’s feature presentation is a return to the company’s foundations.  The Many Adventures of Winnie the Pooh was a hit for Disney in 1977 and created a cast of enduring characters who remain highly popular in the parks.  I reviewed the film back in March and enjoyed it as a package of various Pooh shorts; a more enjoyable experience than Disney’s original “package” films.  Thirty-four years later Disney returned to the Hundred Acre Wood, and the experience is still enjoyable but bittersweet.

Pooh and his friends spend their days finding honey, Eeyore’s tail, and evading a monster known only as “Backson.”

Winnie the Pooh is the third Disney sequel created in-house, alongside Fantasia 2000 and Rescuers Down Under, and with those in consideration this is the epitome of Disney sequels.  Furthermore, while Pooh and his gang have continued their adventures on DVD and theatrically, this is the only Pooh sequel Disney recognizes within the canon because it was created by the Walt Disney Animation Studios.  (Past efforts were created by DisneyToon Studios.)  As a standalone feature, Winnie the Pooh is near identical to Many Adventures; both have various subplots weaved in, and each involves Pooh’s quest for honey and Eeyore losing his tail.  Where this feature differs is in weaving the subplots seamlessly into one continuous narrative.  This is a movie as opposed to three cartoons placed together on one video.

The hurdle to get over is that of time.  Thirty-four years has elapsed since the original film, and sadly several of the original voice actors are no longer with us.  The voice I noticed the biggest difference with was Piglet as John Fiedler‘s voice is so distinctive.  Travis Oates has the basic stammering and high-pitched squeak of Piglet, but he lacks the whispery tone of Fieldler.  John Cleese is our narrator this go-round, and Craig Ferguson plays Owl (one of two modern acting choices in here; the one I was okay with).  The element I just couldn’t embrace was the musical score.  I recall Many Adventures having music, but Winnie the Pooh is a musical with production numbers.  The various songs, most memorably “The Tummy Song,” are catchy and capture the similar whimsy of old Pooh standards like the title track.  It’s worth mentioning that the new songs are penned by Robert Lopez and Kristen Anderson-Lopez, who are being praised for their work on Frozen.  However, Zooey Deschanel also sings a few songs, including “Winnie the Pooh,” and if you find her singing irksome, it’ll rankle you everytime you hear her voice.  Bringing in Deschanel comes off like an attempt to get hipsters who find her brand of “adorkable” acoustics sweet, but it just jars you out of the movie.

The various stories all come together in a sweet package, although at only an hour and five minutes, there’s little memorability because it’s so breezy.  Winnie the Pooh is a solid entry in the Pooh franchise, although my eyebrows remained raised about it receiving a theatrical release.  It hearkens back to the company’s roots, and coming off Tangled it’s another mark of quality and paying tribute to what came before.

NEXT WEEK: We enter the world of video games with Wreck-It Ralph