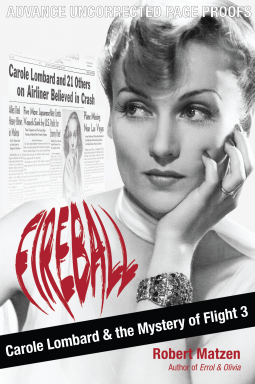 I’ll republish this review during the holidays when a special 250 copies are released, and again in January when the book is officially available, yet I’m writing on it now.  Why?  Because Fireball is a gripping, harrowing, and ultimately upsetting biography about Lombard and the tragic plane crash that ended her life.  Author Robert Matzen blends biography with social events to create a well-rounded detailing of Lombard’s life and death.  Moreover, he explores the other, unnamed members of Flight 3, fleshing out a story that wasn’t all Lombard’s to tell.  Fireball is an exhaustive examination of a Hollywood tragedy rendered with all the sincerity and honor it deserves.

Matzen sets the scene in a touching prologue wherein he goes up to Potosi Mountain to explore the remaining remnants of Flight 3.  As he traipses through the area he ends up discovering human remains.  Melodramatic and an exaggeration?  Maybe.  But it’s necessary to set the scene and reiterate that the evidence is still entangled in the doomed mountain.  From there, the book mixes biographical information on Lombard’s career with anecdotes and information on the flight and its crew, all culminating in a fiery crash claiming several souls and ruining a multitude of families.  The multiple perspectives is what sets Matzen’s book apart.  People remember Lombard’s death, but can you name the other people who perished alongside her (including Lombard’s mother). Matzen gives the readers seeking a background in Lombard herself what they want.  He details her struggles to secure fame, her tempestuous relationship with actor Clark Gable, and ultimately the decision to board an airplane on a star-filled January evening.  What’s frustrating is the very elements that aligned perfectly to bring Lombard to her demise, and Matzen pulls no punches.  He blames Gable’s philandering as a reason Lombard was adamant to make it home early, but he also casts aspersions on Lombard herself who bullied her mother and publicist to take the flight, despite the latter having a dream wherein he died on a plane.  Not one of the Hollywood trio wanted to go home on a plane – with air travel still in its infancy – but Lombard let a coin toss decide their fate, and the rest is history.  In the last chapters of the book Matzen recounts all the slight things that, had they been a tiny bit different, would have resulted in Lombard, and the others on the flight, living long and fruitful lives.  Hindsight is 20/20 so this is where the author is spouting clear conjecture, but it only strengthens the belief that Lombard was doomed in many ways.  Neither Lombard nor Gable was perfect, but Matzen shows the reader the toll Lombard’s death had on her famous husband.  A few chapters in the end focus on Gable’s life, post-plane crash, and it’s sad to hear of Gable closing off her room, leaving it as a shrine to his fallen bride (and how his last wife ended up selling off everything).  There’s a string of broken people left in the wake of this tragedy, but to read how this icon of machismo had his heart irreparably broken stays with you.

The strongest element of Fireball is when the focus isn’t on Lombard, but the other people who perished in the crash/inferno.  Matzen recounts the lives of almost everyone else, proving that no life, no matter how famous, is more important or worthy of recognition.  You learn about Wayne Williams, who made a young boys day by dressing up as a famous mail carrier, and who sadly received the blame for failing to keep the plane in the air; air stewardess Alice Getz who was set to be married; Lois Hamilton, a woman who was on the plane at the last-minute in a bid to see her husband, and brothers Edgar and Robert Nygren.  Each story is traumatic purely for the potential wasted.  Each person had something to live for, and their potential was unlimited.  In some cases, one of the Army members swapped his ticket with someone else, another sleight of fate.

Matzen brings it all together and closes out the book with an exploration on the various possibilities for why the plane went down.  No definitive conclusion was ever settled on, and theories range from pilot error to sabotage (Matzen alludes to sabotage earlier in the book, but seems disbelieving of it).  In the end, Matzen never seeks to cast blame or focus on the lurid.  He wants to document the lives lived and lost which is admirable in a time where biographies too often focus on conjecture and salaciousness.

Fireball is one of the more informative, interesting, and forlorn books I’ve read.  Having only a basic knowledge of Lombard, specifically her demise, Matzen provides a deeper examination of her life and career, as well as why her death resonates to this day.  On top of that, he provides a biography on the 20 other souls aboard, commemorating them alongside Hollywood’s Queen at the time.  The book is an exploration of life amidst death, honoring and revering those who died for their country.

Fireball: Carole Lombard and the Mystery of Flight 3

8 thoughts on “Fireball: Carole Lombard and the Mystery of Flight 3” Leave a comment ›