It’s rare to read a book that enhances your appreciation of a movie.  I reviewed Network awhile back and my review was cold overall.  I enjoyed the movie, but failed to fawn all over it like I expected to.  That’s why we need Dave Itzkoff’s book, Mad as Hell: The Making of Network and the Fateful Vision of the Angriest Man in Movies to remind us.  In his comprehensive exploration of screenwriter and playwright Paddy Chayefsky, Itzkoff takes us into the world of Network, it’s filming and how it shook up the world of news broadcasting.  After putting this book down I immediately rewatched Network.  If anything, the only slight against this book is it doesn’t include a complimentary DVD of the movie because you’ll be inspired to rewatch.

Screenwriter Paddy Chayefsky was always inquisitive about the world around him and after winning an Oscar for his work on Marty, Chayefsky wanted to go further.  He did his due diligence while researching Network, even spending time with news executives who later denounced the film as being “unrealistic.”  In the process of making the movie, filled with commentary on the nature of life, celebrity, and the media, he created a film too big for its time.  Itzkoff’s book explores every facet of the man, his movie, and the world it created without ever once feeling like he’s wasting time with filler.  Every sentence serves a purpose and Itzkoff presents a clear thesis with a lively voice.  Mad as Hell is equal parts Hollywood making-of and a political science dissertation in one. 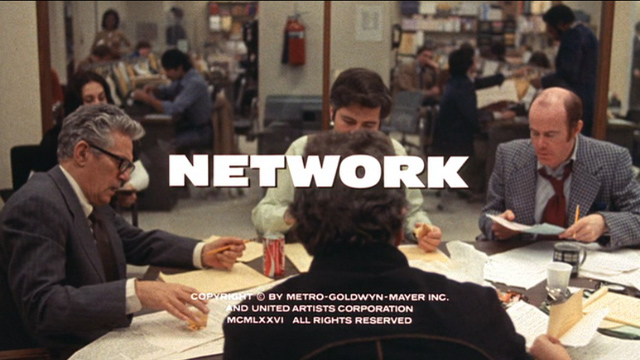 Rewatching Network today only strengthens its themes.  If anything, it was created too early and plays better with our constant news media and various agendas.  Itzkoff makes a point of interviewing various media professionals from Keith Olbermann to Glenn Beck to present a final overview of how Network’s shaped our own 24-hour news media.  For a movie which was proclaimed to have gotten everything wrong about the news industry, today’s media would say differently (although there are just as many who believe Network is highly exaggerated).

As for its Hollywood connections, Mad as Hell’s pages analyze the creation of the finished movie, from the hiring of director Sidney Lumet to issues with cast and crew.  Faye Dunaway comes off as the evil villain of the piece, continually procrastinating and nitpicking her performances even after the movie aired on television.  A star on the rise, Dunaway certainly earned her Oscar but at what cost?  Itzkoff’s examination of Dunaway’s later roles and eventual crash-and-burn is a sly “I told you so” but also a subtle look at the nature of celebrity itself.  However, the book gives Dunaway her due, particularly playing a character struggling to assert her independence in a male-dominated field during a period where women’s liberation was still finding its wings.

The core of the book, for which it famously receives its name, is in the character of Howard Beale played by Peter Finch.  Network was the comeback vehicle for Finch, garnering him an Oscar nomination, but came at a cost.  Said Oscar nomination was posthumous due to Finch dying of a heart attack shortly after filming.  Network, in its own way, ending up cursing its cast members with both Finch and William Holden dying later on and Dunaway’s career being tarnished.  The book never says these events are mutually exclusive, but it adds an air of solemnity to the film.  The moment in time in which it was created could never be repeated, literally.  Chayefsky also struggled post-Network, making many enemies for his depiction.  For all of the screenwriters attempts to capture his thought, it ended up damning him.

Mad as Hell is an incisive look at the making of a movie so brash and original its force is still felt in our popular culture today.  If you’ve ever felt mad as hell, you should thank Howard Beale and the man who created him, Paddy Chayefsky.

Mad as Hell: The Making of Network and the Fateful Vision of the Angriest Man in Movies

Journeys in Classic Film Mad as Hell: The Making of ‘Network’ and the Fateful Vision of the Angriest Man in Movies
%d bloggers like this: