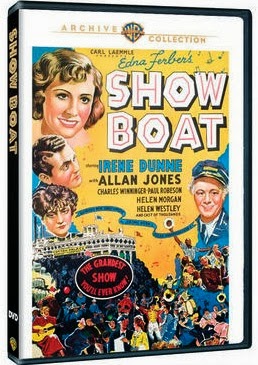 I’m finicky when it comes to musicals, some grab me right away and others leave me indifferent.  James Whale’s adaptation of Show Boat placed me in the latter category and I can’t accurately justify why.  Maybe it’s the sprawling two hour runtime, or the placement of Irene Dunne in both blackface and in a musical.  Or it could be I wouldn’t enjoy the musical if I saw it on-stage and that translated on-screen.  There’s a divided 1951 remake and maybe I’d enjoy that more.  As it stands, I didn’t hate Show Boat, but I fail to see its appeal.

Magnolia (Dunne) is a young Southern girl raised her entire life on a traveling show boat.  When she meets Gaylord Ravenal (Allan Jones), she believes her life is bound for excitement.  Unfortunately, Gaylord has a dark past which threatens Magnolia’s happiness.

Director James Whale jumped at the opportunity to direct the musical adaptation-created by Oscar Hammerstein II-of Edna Ferber’s novel and it was the film he was proud of most.  I would never believe this was Whale’s work at first blush, and yet certain scene compositions distinctly remind me of Frankenstein (Paul Robeson in jail during the “Old Man River” number especially).  The musical performances are also fantastic with soaring high notes and emotion in every line.  The aforementioned “Old Man River” number is glorious, with Whale wisely giving Robson a close-up as he bellows the lyrics.  You feel every emotion via the cinematography and the raw power of Robson’s face and vocals.  There were several musical sequences cut from the movie to lessen the already prodigious runtime and it surprised me because I only remember three songs.  The one between Jones and Dunne sounds like it’s played at least five times in the finished product, lovely but repetitive.

The Hays Office took umbrage with the miscegenation plotline between Miss Julie (Helen Morgan) and her husband, but the entire analysis of race in this film is startling considering the time period.  Robeson’s Joe and Hattie McDaniel’s Queenie are fully realized characters, with an exploration of their relationship, both within the show boat and as individuals, alongside the white cast.  And despite Julie’s plotline settling rather quickly it is done in a way which never condemns her for marrying a white man.  Of course, for all the goodwill in the race department we still have Irene Dunne performing in blackface. 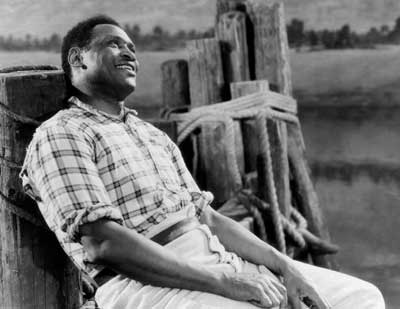 The opening sequence is lovingly presented via miniatures and cardboard cut-outs in a merry-go-round fashion, just one point where Whale embraces the stage play.  Show Boat is probably one of the best movies to utilize painted sets; and though the movie has location sequences there’s an awareness it’s based on a play and thus the characters all seem to perform as if they’re on-stage.  It helps that several set pieces are shows within the show.  The film’s first moments take a couple of minutes orienting the audience, particularly because the characters don’t spout their lines as if they’re conveying exposition.  The dialogue, especially in the opening, comes off as organic and genuine.  When Julie is talking to her lover, she isn’t telling the audience “This is my lover and here’s who I am.”  You must pay attention to figure out how characters know each other.

The acting was scatter-shot for me with a few actors overextending themselves because of the musical nature of the film.  Allan Jones is rather stiff, as if he’s performing opera instead of in front of a camera.  Irene Dunne is good, but I never bought her as a young Southern jewel whose been sheltered her entire life.  This was lessened in the last hour when the movie becomes a domestic drama focusing on her rise to fame and raising a child alone.  I do recommend watching her “dancing” which is interpretive dance at its most hilarious.  For me, the stand-out was Helen Morgan as Julie.  She receives a plotline fitting into the Southern dynamic, and Morgan allows you to believe she’s led a tortured life we’re never privy to.  Charles Winninger as Captain Andy is the comic relief with some biting lines I wrote down: “Don’t be so narrow-minded…I killed a man myself!”

The movie’s second half kicks out characters like Joe and Queenie in favor of presenting a sentimental domestic drama about star-crossed lovers and separated parents.  This isn’t a problem for Dunne whose able to elevate the turgid story out of its mundane plot contrivances.  However, Jones is given weight in the story and he’s just too dull to capture your attention.  He’s so focused on the acting that you believe he’s auditioning for the opera.  He’s a great singer, but a poor actor.

Show Boat is a well-made picture and the perfect vehicle for Whale to stretch his wings as a director.  Unfortunately, it feels very much like an Important Picture that the pace struggles to hold it up.  If you’re a fan of the original musical than it’s worth watching.  Warner Archive’s 5th anniversary DVD release is decently produced, especially for fans wanting to watch this for decades.