The first of (hopefully) several articles exploring the upcoming TCM Classic Film Festival simultaneously marks the return of the Mint in the Box review.  If you missed my inaugural post exploring the Sound of Music Collector’s box set, check it out!  I received the Wizard of Oz Collector’s Edition after begging and pleading with my parents, ultimately convincing them that if I didn’t get the flash drive included with this set, exclusively sold via Amazon, my life would never be good again…and they could write it off as a business expense or something (didn’t work out in my favor there).  Thankfully, opening this set up now was a great idea, aiding my journey into the TCM waters next week.

I did create a fun review of The Wizard of Oz last year, and you can read that over here.  We all should know the film by now, and if you haven’t watched The Wizard of Oz yet there’s no help for you.  (I jest…kind of).  I won’t review the movie proper but the box set comes with any and all ways to travel to the magical land of Oz.  The movie component includes a 3D Blu-ray of the film which you can only watch with a 3D TV.  Since I lack all the 3D elements, that particular disc will probably never see the light of day.  There’s also the standard Blu-ray, a 2-disc DVD and a code for a digital copy of the movie.  The movie on Blu is stunning and includes a wealth of bonus content including an hour-long making-of, audio commentaries, singalongs, biographies, and a Lux Radio Theater presentation.  There are two-discs worth of content so I’m barely scratching the surface. 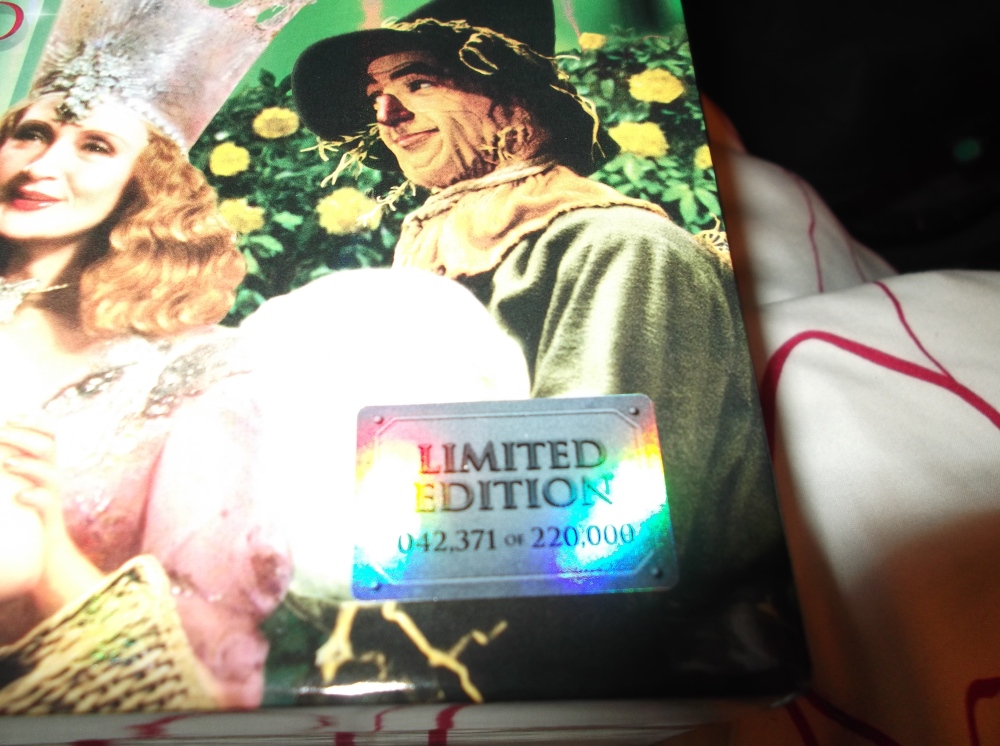 You really want to know about the box set itself right?  I mean, these aren’t exactly cheap so they need a bunch of goodies to get your dollar.  As with The Sound of Music set, the Wizard of Oz 75th Anniversary Collector’s Edition blends knickknacks with insightful commentary on the movie itself.  The box is hefty from the outset, with a beautiful photo of the whole gang on the front.  Each box is limited edition with a number on the front.  Sorry if it the photo came out blurry.

After opening it, there’s a hardbound book detailing the entire production of the movie, from the germination of the original idea to cast changes and première.  This is a brief picture book but provides rare photos of costuming testing, and actual scenes with the original characters, hair, and costumes which were eventually reshot.  There’s a timeline running along the bottom of each page which fascinated me because as you’re looking pictures of filming they timeline mentions casting is still going on and changes were being made.  Underneath the box is a large map of Oz printed on cardstock and a still of Dorothy entering Oz for the first time.  These are a bit flimsy, but are suitable for framing if you’re so inclined.

In the interior of the box are the goodies and the Blu-rays/DVD.  I collect these because of the gimmicks and boy are there are a ton of fun things for you to play with.  First off, is a notebook with the infamous Kansas tornado on the cover.  I was looking for a notebook to take with me to TCMFF, and what better way to connect with the festival (since Wizard of Oz is playing there) than to have a notebook associated with the film?  There’s also a small glitter snow globe with the ruby slippers on top that lights up.  My mom assumed the set would contain a regular snow globe, but I found it adorable.  There’s also a flash drive in the shape of the Wicked Witch of the East’s infamous striped-stocking leg (yep, I asked for this set because of this element alone).  There’s also three beautiful pins in the shape of the “gifts” the wizard bestows on Dorothy’s friends (a diploma, a heart watch, and a badge of courage).  I plan on pinning the heart watch to my lanyard so be on the lookout  for it if you see me at the fest.

Overall, for the value, there’s a lot to enjoy about this collector’s edition whether you’re purchasing it for the movie or the tchotckes inside.  It’s on-sale quite a bit via Amazon so if you don’t have the movie on any Blu-ray, consider the box set. 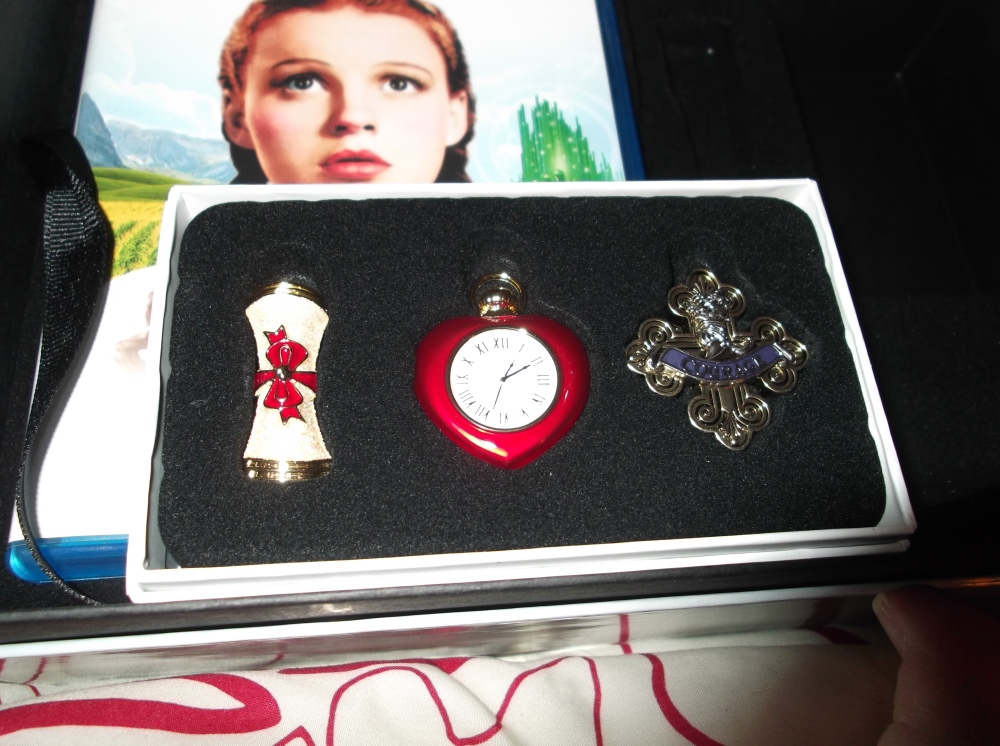 Journeys in Classic Film Mint in the Box: The Wizard of Oz 75th Anniversary Collector’s Edition
%d bloggers like this: