**Today’s review is part of the Great Villain Blogathon.  If you’re interested in seeing the other villains assembled check out the blogathon homepage.**

William Wyler’s directed several iconic movies such as Jezebel, Wuthering Heights, and The Heiress.  All three movies are sumptuous costume romances with a dominant leading lady….all of which is missing from Wyler’s later masterpiece, The Collector.  Without Wyler’s name on the credits it’s hard to believe the director of such sweeping tales of romance would be responsible for this dark tale of obsession and control, and yet it’s perfect for him!  Reviewing this for a blogathon devoted to villains is interesting because Wyler prevents you from hating the lead outright to create a complex tale condemning society and old-fashioned romance.

Freddie Clegg (Terence Stamp) is a lonely lepidopterist (butterfly collector) obsessed with beautiful art student, Miranda Grey (Samantha Eggar).  He kidnaps her and keeps her confined in the basement of his recently purchased English manor in the hopes she’ll “get to know” him.

Wyler’s original cut of The Collector ran three-hours and it pained him to cut it down to the almost two-hour finished product.  Thankfully, the Academy liked what they saw, nominating Wyler for Best Director and Eggar for Best Supporting Actress.  The Collector is a bizarre, twisted romance walking the tightrope between sensitive, disturbing, and misogynist.  The idea of a man “collecting” a woman and confining her to his basement already leads one’s mind into dark areas, yet Wyler underscores these elements with a romanticized take.  Freddie’s kidnapped Miranda, sure, but he keeps her in one of the most beautiful crypts I’ve ever seen.  He’s willing to do whatever she wants, give her anything she desires, and “respect your every privacy” so long as she stays with him; 13-year-old girls the world over might remember a similar bargain in Jim Henson’s Labyrinth.  Still sounds somewhat reasonable to me, amiright?

All of this is achieved by putting the audience in Freddie’s point-of-view.  A methodically winding stalking sequence opens the film, and from there we see Miranda as Freddie sees her; the camera voyeuristically lingers as Freddie pulls a piece of hair out of Miranda’s mouth, savoring her expression as she revels at the first chance of being outside.  Freddie, for all his misplaced deeds, believes Miranda loves him, and he isn’t interested in her as a sexual object (upon bringing her back to the crypt he pulls down her skirt) but as an object nonetheless, a talking butterfly.  The title itself alerts us to Freddie’s intent: collect Miranda and keep her forever.  Butterflies fail to lose their beauty through old age giving you an idea of how this movie inevitably concludes.

Every moment in The Collector is deliberate on Wyler’s part.  The stalking sequence aside, much of the first half-hour is silent, reliant on atmosphere and action.  He attempts to unify the couple via editing, showing both laying down in a haze (her awaking from a drugged sleep, him taking in the beauty of the world after capturing his prey).  Wyler also masters the difficulty of producing sympathy for Freddie,   one reason labeling him a villain is a bit of a misnomer.  Freddie’s troubled and disturbed, but Wyler’s direction and Stamp’s acting put you in the position of understanding him.  This is a man who lives and breathes for Miranda: “It’d be worth it [going to jail].  It’d be worth going for life” and if this was a 1940s romance Freddie would be the hero who gets the girl.  Wyler, with all his prior experience directing romances, knows how to tug on the audiences’ hearts and perverts that.

Stamp’s baby face and hangdog expression aid in the character’s unrequited love.  When he tells Miranda “They’re looking for you, but nobody’s looking for me” society’s cast him out; women have cast him out.  The fact we’re not privy to Freddie’s past only deepens the mystery and leaves you questioning what happened to him to cause him so much anguish.  The chivalrous score with the sound of lutes deepens Wyler’s hopes that you’ll believe Freddie is a tormented prince seeking his princess.  That’s not to say there aren’t moments where Stamp is utterly terrifying.  No matter the extent of his love, Miranda is his prisoner.  When she tries to escape, discovering Freddie hiding behind the door, he looks down at her from the top of the stairs with a look shooting daggers.  He may carry a small notebook to take down her requests, but he’s unafraid to use force to keep her confined.  Wyler asked Stamp to stay in character and stop being friendly with Eggar during filming.  The lack of interaction off-screen turns the most innocuous scenes into moments of panic and awkwardness. 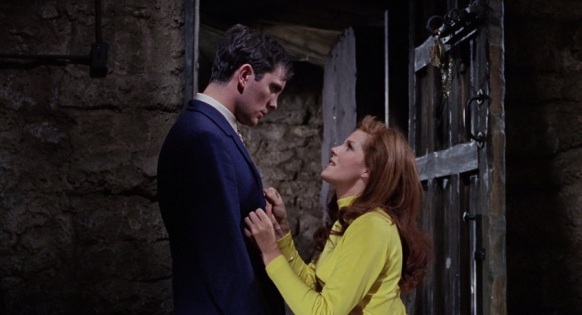 If you read my review of The Brood last year, you’ll recall I wasn’t fond of Samantha Eggar’s performance.  I still find her overbearing in Cronenberg’s horror show, but as the imprisoned Miranda, Eggar is superb!  Natalie Wood turned down the role, a good move because Wood’s A-list persona and abundant good looks would alienate audiences away from Freddie.  Audiences don’t want to watch Natalie Wood in peril, think of Audrey Hepburn in Wait Until Dark.  It’d be easy to deconstruct the last third of the movie in terms of misogynistic intent-according to Freddie “she deserved everything she got”-but it’s a moot point because of how proactive Miranda is.  She fails to understand Freddie’s mixed-up desires for her comfort and confinement, “You want me to be a happy prisoner,” but at the same time is resourceful enough to devise several different means of escape.  The key element is our ability to understand both character’s perspectives.  Miranda lacks as much history as Freddie (the movie alludes to a lover but all the character’s scenes were cut) and so we’re presented with her character as starkly as his.  We don’t know how Miranda would react to him in the real world, nor do we believe Freddie’s fear she wouldn’t give him the time of day.  There’s also a touch of self-awareness to Eggar’s scenes.  After escaping for the third time she tells Freddie, “I wouldn’t be a good prisoner if I didn’t try to escape.”  She tries to please him as much as he does her, but in the end neither heart can truly change.

I don’t remember the last time I’ve written over a thousand words on a movie, and I failed to discuss the allusions to The Tempest, and the ending with the butterfly imagery.  William Wyler’s daring vision of obsession and love is astounding, as I’ve implied, and a huge departure from the overarching romances he was known for.  Go watch it!