The Wizard of Oz turns 75 this year and audiences the world over are well-aware of it, whether it be the recent anniversary box set (which I reviewed two weeks ago) or its recent gala 3D tribute at last week’s TCM Classic Film Festival, there’s still plenty to talk about in regards to Dorothy and her ruby slippers.  TCM and Turner Entertainment are leading the charge considering their association with the film, and recently put out a companion book exploring the world of Oz and its progression from book to screen.  This whimsically beautiful coffee table book explores all you’d want to know about the movie and its enduring appeal.

Authors William Stillman and Jay Scarfone create a book you could prominently display or read with your children.  The book is slim despite its height, but covers every facet of the movie from its inception to the people behind the scenes, individual characters, and the various rereleases.  The book’s sturdy cover and beautifully decorated pages are on par with past Turner books focused on classic Hollywood.  The pictures don’t go to the edge of the page, but the backgrounds, use of quotes and stills to segment each chapter keep you pouring over the pages like a Where’s Waldo book.  There isn’t a heap of new information, and I was a bit sad about elements left underdeveloped; it has two pages discussing the ruby slippers and even then doesn’t explore the various changes to the shoes, despite showing photos of Garland in the rare Arabian designed ones. 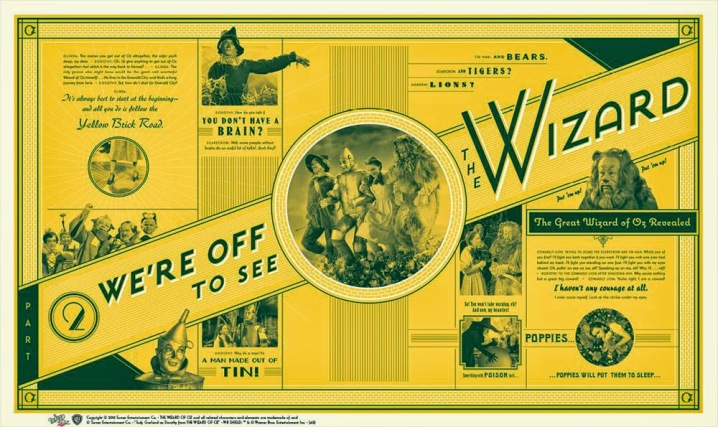 The pictures are what audiences want to see, and if you were unable to make it out to the TCM Classic Film Festival you’ll want to look at the rare set photos and costume designs.  The various changes made to the character’s looks are well-documented, but it’s the rare photos detailing the few weeks of filming where Garland had blonde hair and a different outfit that fascinates.  Various make-up tests are also shown, several compared to the original photos from L. Frank Baum’s book.  And yes, Gale Sondergaard’s pictures are shown, but I’d have liked to see photos of her filming (the book alludes to it).  Regardless, there’s enough never-before-seen photography to compel a purchase.

There’s also a heartfelt story explaining why the movie’s endured for so long.  There’s mini-biographies of the marketing campaigns for the movie around the world, truly encapsulating the breadth of love for the movie (although the Danish apparently turned their noses up at it upon release).  The various re-releases and television airtime have only opened up the movie to new generations.  The back of the book also contains reproductions of marketing ephemera including a great bookmark, a reproduction of the Wicked Witch of the East’s death certificate, and other goodies to put alongside the items in the 75th anniversary box set.

Wizard of Oz fans would do well to buy this official 75th anniversary companion.  HarperDesign, with the aid of Turner Entertainment, do a beautiful job crafting a book you’ll eagerly devour and make a spot for on your bookshelf.  It does a fine job of reminding you there’s no place like home!

The Wizard of Oz: The Official 75th Anniversary Companion