Before Orange is the New Black rocked television screens, the women’s prison was a location commonly lampooned in exploitation movies of the 1970s or X-rated content.  If you go back further you’ll find 1950’s Caged, a social welfare “expose” on the harsh realities of a women’s prison.  The various tropes of “women in prison” movies are delicately established, but Caged is more concerned with characterization and film noir archetypes than anything in the vein of exploitation.Marie Allen (Eleanor Parker) is serving time after being convicted of armed robbery.  As she struggles to serve out her sentence she comes up against a vicious matron (Hope Emerson) and hardened criminals who assert Marie is doomed to a life of crime.

The social welfare film was a staple of the 1950s.  Their documentary approach to issues like prison reform and crime showcased the harsh underbelly of society from the comfort of a movie theater, and reminded you of the harsh realities awaiting you for just thinking of breaking the law.  Caged was originally planned as an A-picture with Bette Davis and Joan Crawford as the leads.  Thankfully, the movie abandoned movie star theatrics in favor of lesser-known actors.  Who would buy Davis and Crawford as hardened women living their lives “behind the iron” without a heaping dose of melodrama and redemption?  Freedom and confinement are separated by a sharp fence here, but the women are continually tempted (or taunted) with the noise of the train where “people are going home.”  For them, the “end of the line” is just the beginning.  There’s little compassion inside the prison itself where the employees and lifers have heard every story a million different ways, whether it’s the nature of the crime or a woman coming in pregnant.  The movie’s intent is emphasizing these things happen every day.  Women aren’t the fey angels in the house but rather have the ability to become tough through the penal system. It’s this system that simultaneously confines them and acts against them.

Caged acts as both a women in prison movie, or uses the penal system as a substitute for male domination against female independence and sexuality.   The 1950s saw the rise of pearl-wearing pictures of domesticity, women who could bake a cake with one hand and fix a martini for their husband with the other.  It wasn’t until the 1963, when Betty Friedan wrote The Feminine Mystique, that women’s lives in the 1950s were revealed as lives of quiet desperation.  The very term “penal system” implies a place where men dictate the laws, and the men of the parole board gamble with the female inmates lives, determining whether their appearance, living situation, and other factors are “pleasing” enough for parole.  The women may be dehumanized by the villainous matron, Evelyn Harper-a stereotypical quasi-lesbian control freak with shades of Chicago’s Matron Mama Morton-but all lose at the game when fighting the male-dominated administration.  A telling sequence involves admin Ruth Benton (Agnes Moorehead), who runs the prison with an iron fist and a warm heart, receiving a dressing-down from a male admin about asking for basic needs for her inmates.  The men believe the women want frivolous things because prison isn’t as dainty as they’d like.  The script secretly takes potshots at a male environment where women are treated as children-Marie Allen acts at her husband’s command and thus ends up in jail-and there’s no difference between a home or a prison when the intention of both is to act as a nursery. 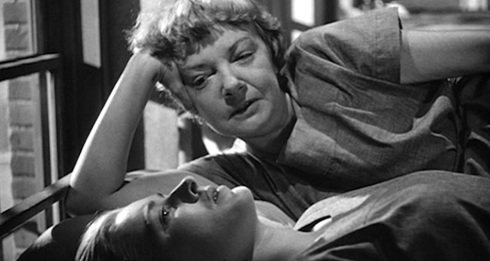 The assembled cast weren’t A-list stars or, in the case of Eleanor Parker, gussied up.  Parker is a dewy-faced lamb amongst wolves, accepting of her portion in the crime compared to other inmates seeking to pass the buck.  She’s there on a technicality, “five bucks less and it wouldn’t be a felony,” a cruel victim of bad luck.  Caged charts this wide-eyed innocent’s descent into crime, proving crime breeds crime (Marie’s pregnancy as the evidence and her baby’s fate hanging in the balance) vs. Ruth’s belief prison is rehabilitation.  The ending asserts the former being Marie’s path, with little hope in between.  Betty Garde’s rough Kitty personifies Marie’s possible future and is sassy with a motherly undertone.  The cast of females with their cattiness and social hierarchy leaves you feeling this is a 1950s Mean Girls or Heathers serving hard time!  The tone is infinitely more serious than those two movies, turning this into a prison system Girl, Interrupted.  Either way, all the movies listed are good.

Obviously, Caged inspired good company. Caged is a product of its time in terms depicting women in prison; it’s a cleaner, less threatening world than we’ve come to know, but the entertainment from the stellar female cast is second to none.  Underneath the prison exterior you have a sharp focus on male dominance during a time when that was the norm.  Warner Archive’s put out a great release, so if you’ve ever wanted to give this a chance buy a copy.