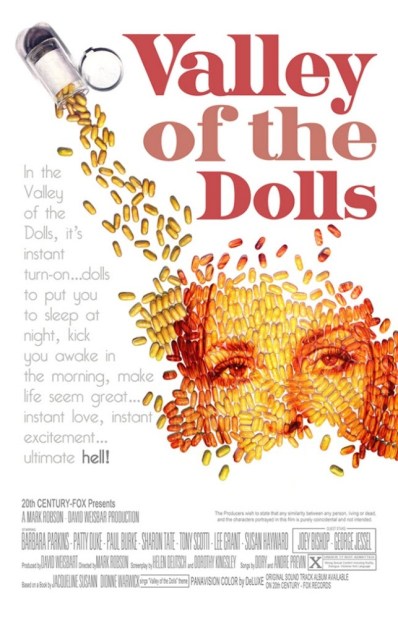 **This post is written in participation with the 1967 in Film Blogathon hosted by Silver Screenings.**

“Was it real?  Was I there?”  Dionne Warwick and I appear to be asking the same question watching  viewing Valley of the Dolls.  Based on the best-selling novel of 1966 by Jacqueline Susann, Valley of the Dolls is a weepy Hollywood tale about the perils of drug addiction, growing old, and the bright lights of stardom.  Unfortunately, the good performances from Susan Hayward, Patty Duke, and Sharon Tate do little to elevate this beyond a piece of 1960s bubble-gum nostalgia.

Anne Welles (Barbara Parkins) is a newcomer to Los Angeles where she becomes enmeshed in the world of stardom after meeting troubled Broadway star, Neely O’Hara (Duke) and wide-eyed beauty, Jennifer North (Tate).

The Carpetbaggers was the movie I immediately compared this to, as both are adaptations of salacious, and highly popular, novels of the 1960s.  Because The Carpetbaggers was set in the 1930s, it lacks the archaic sentiments of Valley of the Dolls, or at least Valley of the Dolls’ sentiments are more old-fashioned because they’re in line with the era in which the film was made.  For example, the women are clingy, drugged out, and/or drawn more to fame than the men in their lives; the men are all philanderers or uncooperative. If anything, the cavalier attitude toward calling homosexuals “fags” drawn more surprises from me when it really shouldn’t have. I can’t say the movie is out-of-touch on its views on women because none of the characters feel like people so much as one-note characters. When Neely O’Hara finds herself in an alley, hands up to the sky beseeching God, as she screams “NEELY O’HARA” you’re drawn to laughter.

Yes, this is the joy of Valley of the Dolls (the mirth is kicked up to eleven if you watch the 1970 sequel), its campy nature.  There are several moments of unintentional, and I have to assume the director/screenwriter saw some of these as intentional, moments.  When Neely – Duke’s character bears the brunt of the humor – snatches Helen Lawson’s (Susan Hayward) wig off her head and runs around with it before throwing it down the toilet, I bought this came off someone’s past experiences (Susann presumably based several moments off her own experiences as an actress in Hollywood) and laughed heartily.  Hayward, Duke (for the most part), and Tate all do well because they play the scenes straight. After Neely tosses the wig in the toilet, Helen acts the lady and decides to “go out the way I came in,” covering her hair and returning to the party.

It would have been easy for the Lawson character to come off as a solitary harbinger of the perils of growing old in Hollywood, and she is, to an extent. This was the role Judy Garland was infamously slated to play before dropping out, due to the script or her addictions depending on what source you’re reading. The saddest thing is, Hayward only has about three scenes and one song, leading one to wonder how messed up Garland was that she couldn’t pull off four sequences. Either way, Lawson’s character is the authentic one in the bunch and Hayward continues to play her roles with dignity into an age, and a character, deemed “past your prime.”

The trio of women we’re meant to follow range from good to ugh. Patty Duke’s O’Hara is a character actually modeled on Garland, and the requisite Hollywood “true story” elements are present: failed marriages, drug addition, rehab stays. Duke is a good actress with a beautiful voice, but too often the role requires epic amounts of overacting. Most of the time, Duke reigns it in, but there are moments that just go too far. Sharon Tate, in the role of her career, is beautiful and has fragility in the role of Jennifer North. Jennifer has the makings of a fairy-tale romance with Dean Martin rip-off, Tony Polar (Tony Scotti). Unfortunately, Tony ends up getting Huntington’s disease while Jennifer goes to Europe to star in pornography masquerading as French “art films.” Both Duke and Tate’s story, and Hayward’s as well, are far more engaging than our lead heroine who brings them all together. Barbara Parkins is a pretty girl, but she’s duller than a box of hammers. Where the other actresses are exhibiting pathos, too often via screaming but it’s emotion nonetheless, Parkins conveys everything in a flat monotone. When she does go off the deep end, it’s comical because there’s no emotion to it. She’s a robot picking stuff up and flinging it around. An element of hyperreality runs throughout Valley of the Dolls. The characters are all meant to live some semblance of reality, but acknowledge this is a movie, and that reality in itself is a simulation at times. For all the overacting that goes on, you can’t help but respect the intensity Duke and Hayward exhibit, or the quiet vulnerability of Tate. The problem is navigating a bloated two-hour runtime, Parkins’ dull plot, and the only song on the soundtrack, Dionne Warwick’s aforementioned theme song, on-repeat to get to all the quality. This is a cult classic worth viewing, especially if you want to watch Tate’s famous role before her untimely demise, but there’s so much hype around this movie for its campiness you might end up disappointed it’s not more overarching. 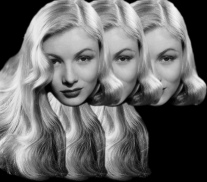 Valley of the Dolls (Special Edition)