Anything defined as “loosely adapted” implies so much poetic license in the story it might as well be original. This week’s biopic, Star Dust, is supposedly loosely based on the discovery of Linda Darnell, and if that’s the case Darnell’s discovery wasn’t anything special. Mixing the story of a rising star, alongside the mundane tale of two other nondescript hopefuls, Star Dust ends right as it gets good.

Carolyn Sayres (Darnell) gets the opportunity of a lifetime when a movie producer (Roland Young) gets her a screen test. 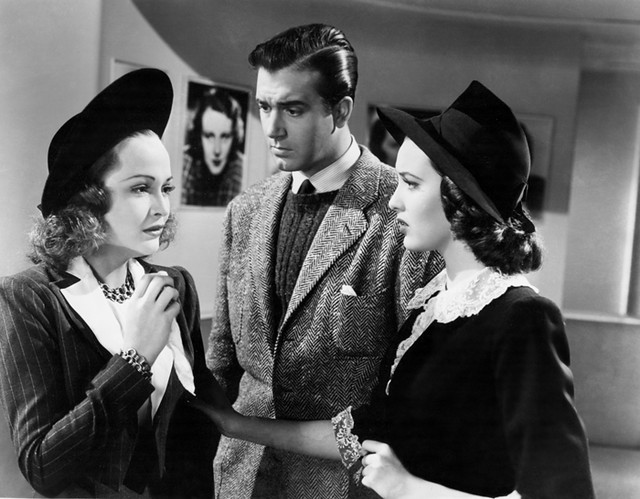 Based on that plot, it’s easy to understand Star Dust’s 85-minute runtime. In fact, I find it a bit misleading to say Darnell is the star, when this is really an ensemble piece with Young being the center by which Darnell, and actors John Payne and Mary Healy revolve around. Young’s Thomas Brooke works for the Amalgamated Film Company (Hollywood loved to use the word “amalgamated”) and goes around the nation’s heartland looking for raw talent to mold into stars.  Most of the time, these stories revolve around a wide-eyed ingenue being discovered, only to find herself torn between the harsh realities of stardom and a normal life. Unfortunately, the three actors who are discovered are interchangeable and lack any type of characterization, even Darnell. Payne’s character is a football star, Healy is a singer, and Darnell is the A-list leading lady.

However, despite her leading lady status, Darnell doesn’t grace us with her presence till over 20 minutes in, and even then she’s sharing screen-time with the other two actors. We get a bit of Carolyn’s determination when she forges a letter from Brooke to the studio, forcing them to give her a screen-test, but after that it’s easy street for Carolyn for reasons unknown. The final seconds of the movie show us Carolyn’s presumed talent, and immediately she’s given the red carpet treatment, right down to sticking her feet and hands in the Grauman’s forecourt. It’s a stardom that’s never earned or appreciated. We never watch Carolyn struggle, outside of her constant declarations of how much she yearns for stardom. If we weren’t cutting back to the other two actors, making the group a trio of aspiring hopefuls, and focused solely on Carolyn’s rise to fame, the movie would have been tighter. As it stands, it’s bizarre to have this be based on Darnell’s rise, yet she seems so ancillary to everything.

John Payne is vanilla as the love interest, and we’re introduced to him first as a singing football player, one of those quirky contradicts you’re supposed to find charming. Mary Healy is sweet…that’s it. Roland Young, Cosmo Topper himself, is truly the lead and he avails himself of any significant failures. The movie’s weak script gives him a love story, and alludes to him stealing away another actress. He gets the best line, asserting said actress was happy to leave the studio, but there just isn’t much to any one character for them to stand out. They all blend into a mass of dull archetypes.

There isn’t too much to say about Star Dust. It’s a formulaic Hollywood story that eschews any depth to the characters, The script isn’t telling a personal tale about a person acclimating to Hollywood as they are a cookie cutter, happy-ending tale saying how anyone can be a Hollywood star if they just believe. With such a basic message, and character to go along with it, there’s little reason to invest in the character, or invest in the movie. Darnell is beautiful, in her early 20s’ at the time, but I never walked away believing I knew her story.

Interested in purchasing today’s film? If you use the handy link below a small portion is donated to this site! Thanks!
Star Dust