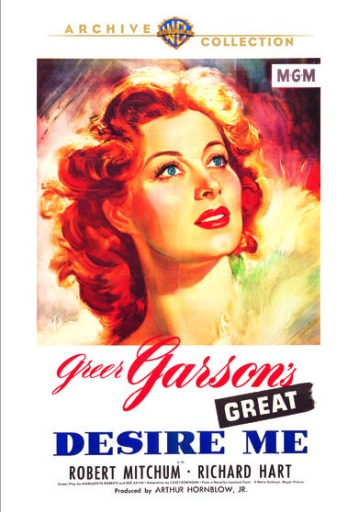 There’s little actual desire to find in Desire Me, a 1947 Warner romance that should be memorable for being the only pairing of Robert Mitchum and Greer Garson, but instead is known more for its production woes. There is some beautiful imagery, and the two leads above could make grass growing interesting, but the movie works better as an out-and-out thriller than anything labeled romantic.

Marise Aubert (Garson) is a war widow mourning the loss of her husband, Paul (Mitchum). When a friend of Paul’s named Jean (Richard Hart) arrives, Marise sees him as a reminder of her husband. Unfortunately, Jean is in love with Marise, helped along by the story’s of her Paul’s told him, and vows to marry her. Complications ensue, though, when Paul turns up, alive and well.

Desire Me’s claim to fame is being labeled the worst movie MGM produced during the 1940s; so much so the studio lost confidence in Louis B. Mayer, eventually calling for a new studio head to replace him. George Cukor was the film’s original director before dropping out in favor of Jack Conway, who also dropped out. As it stands, Desire Me has no credited director. What is it about this movie that two respected directors couldn’t make heads or tails of it?

The film has the makings of a thriller, but with Garson as the heroine, maybe the studio thought no one would accept it? Jean is obsessed with Marise after hearing about her constantly from Paul. Paul’s love for Marise, his idealization of her, and the beautiful, seemingly perfect life they’ve lived, gives Jean the impetus to take over once Paul’s gone. I’m not sure how 1940s audiences responded, but Jean is a stalker with obsessive tendencies; a man who walks into Marise’s house, starts fondling her things, and practically screams “Honey, I’m home!” When Marise comes home, hearing someone playing a piece of music Paul loves, it’s no surprise she thinks her doomed lover has returned. And yet, Jean fails to understand why Marise isn’t happy to see him. How is this a romance where you’re meant to see two romances play out, when one of the wooers is a nut? 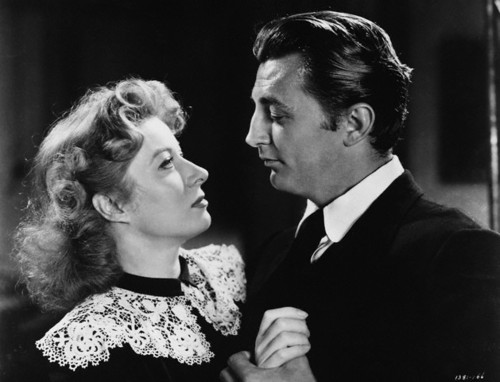 The script, based on a stageplay by Leonhard Frank, is filled with ridiculous one-liners and follows a bland call-and-response narrative. When the characters aren’t wistfully sighing each other’s names (the amount of “Marise’s,” “Jean’s,” and “Paul’s” could give you alcohol poisoning if you were playing a drinking game), they’re running in circles on conversations going nowhere. Too often the characters are left to lament about their lives while another answers with a complimentary lament of their own. Here’s the moment where I think the three screenwriters just gave up:

Anyone else think that conversation went in the wrong order? The script is in love with its concepts of romance without asking if the audience loves the characters and believes in it? And the first half of the movie’s 90-minutes is told in narration, creating a picture book, read aloud with A-list stars. There’s no room for the audience to interpret anything since all the thoughts and emotions are spoken to us.

Robert Mitchum and Greer Garson are so otherworldly gorgeous it’s not surprising they’d appear in a romance opposite each other, if only this wasn’t the remaining evidence of what could have been. Garson plays a French woman with no discernible accent from her native country (a growing pet peeve of mine). Other than what Paul says about her, we never lift the veil to see beneath; we take his word for it. It would have been interesting to have Jean discover Marise isn’t perfect, that Paul’s stories are isolated good memories without any mention of how their marriage truly worked, the problems they had. Instead, Garson is the perfect embodiment of woman with no faults, complexities, interests, or depth.

Mitchum himself is woefully underutilized, showing up in a handful of sequences, separated sequences showing his time in a POW camp. It’s easy to understand why they’re separated for so long, and Mitchum’s time in the POW camp looks lengthy. Unfortunately, the timeline gets wonky upon his return. It’s never explained whether Jean’s been living with Marise for days or months. The way the townsfolk react, it’s too soon for Marise to entertain the notion of seeing another man, and yet Jean is so comfortable and their romance comes off as so deep, it must be months, right?

Desire Me is worth watching because Mitchum and Garson have a spark of chemistry despite the lack of proper kindling. When the movie finally puts them together there’s magic and a decent amount of heat between them. It’s needed because it’s practically freezing between Garson and Richard Hart who plays Jean. Hart is decent, but the role requires a twist in either a romantic or sociopathic direction, neither of which Hart pulls off with any conviction.

Desire Me garners a tentative watch, if only due to Mitchum and Garson’s pairing. However, feel free to fast forward to the hour mark if you want to watch it play out. For the most part, Desire Me is a frigid romance with little thought in it. It’s a war romance with a modicum of both, enough to say it belongs in the genre, but certainly not enough for it to warrant anyone listing it as one of the best. 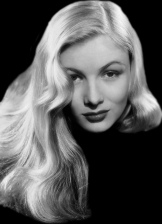