Our final tribute to Nick and Nora Charles is a pair of documentaries included with the Complete Thin Man box set. (I assumed the final disc, Alias Nick and Nora, was a documentary discussing the legacy of their work in the Thin Man series as a whole.) William Powell: A True Gentleman and Hollywood Remembers: Myrna Loy – So Nice to Come Home To are each fascinating, if brief, summations of each star’s career and a proper explanation of why they’ve endured for so long.

Considering both documentaries are incredibly short – So Nice to Come Home To clocks in at 46-minutes while A True Gentleman is a measly 31 minutes – it’s best just to discuss them combined. With just a knowledge of the films, each documentary spotlights Loy and Powell’s careers and personal lives to the best of their abilities. In Loy’s case, since she was alive at the time of production, there’s absolutely nothing about her personal life short of narrator Kathleen Turner saying she was married, and divorced, four times. Powell’s doc isn’t much better – it is barely 30 minutes – but finds a way of balancing Powell’s childhood with his rise in acting.

Each documentary is about the work, including The Thin Man series and other features in their oeuvre. The various co-stars of both stars are never interviews, many were deceased by the time the docs were produced, so Powell’s is mostly comprised of film historians while Loy’s has no interviews at all. Kathleen Turner, the host of the Loy documentary, has a great voice, but it’s hard to fathom why she was the narrator outside of her presenting Loy with an award at the time. Turner’s tendency to mug in front of the camera comes off as if she’s bent on consuming it, film and all. The Powell doc uses Michael York as the faceless narrator, which works better as his dulcet tones never overshadow the main man.

The short time and breakneck pace make these perfect for TCM interstitial, and I believe both have played on TCM at some point. They’re fun bonus features on a box set, and if you have an hour they’re worth a watch. 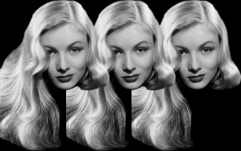