Mr. Deeds Goes to Town is the culmination of every Capra ideal, extrapolated on three years later with Mr. Smith Goes to Washington. Watching this for the first time was a unique experience as I blended my existing knowledge of Capra’s tropes into this feature which clarifies and excavates them further.

Longfellow Deeds (Gary Cooper) is a man of simple pleasures living his life in Mandrake Falls, Vermont. When his uncle dies and leaves him a fortune, Longfellow leaves Mandrake Falls for the big city. He soon realizes the city isn’t built for him, but not before falling in love with a roving reporter named Babe Bennett (Jean Arthur) who uses their burgeoning romance as a means of writing newspaper articles about him. Watching this alongside American Madness puts the similarities in stark focus. Both movies feature an individual coming up against institutional corruption in order.  Longfellow isn’t so different from Walter Huston’s Thomas Dickson, either. Both Longfellow and Dickson judge people based on their inner characteristics and believe in using wealth for a good cause. If American Madness’ message was a bit too subtle, that’s out the window in Mr. Deeds and it works, heightening the sentimentality while bonding you to the characters.

We meet Deeds in the Norman Rockwell world of Mandrake Falls “where no hardship e’er befalls.” The townsfolk call each other “neighbor” and take everyone literally at their word. Like American Madness, the city people come off as gangsters, best represented in the character of Cobb (Lionel Stander) who looks and sounds like Little Caesar’s cousin. Longfellow, described as “very democratic” and named after the famous poet, isn’t interested in money; $20 million is just a large amount to him, with no real weight of its implications within his life.

Deeds’ “share the wealth” concept must have had an effect on Depression-era audiences, although I’m interested to hear fans today not cast a disparaging eye on it and call it socialism. (It’s hard not to compare Capra’s politics to today’s.)  We understand his yokel persona, but as the plot progresses and Deeds starts handling his newfound wealth the script confronts us with the fact that not understand the gravity of wealth is just as bad, whether you’re poor or rich already. It’s why the sequence where a homeless man comes to Deeds door screaming about Deeds’ misappropriation of his money is so powerful. Deeds finally realizes he hasn’t been using his money for any type of improvement; he wants to bury his head in the sand. Speaking of that sequence, as Deeds watches the man voraciously eat, probably the first real meal he’s had in weeks, it’s Capra at his purest and most unrepentant.

With today’s politics in mind, it’s difficult not seeing Deeds as a man called to the Presidency. Thomas Dickson of American Madness was the president of his company, elected to his position based on his accomplishments and working alongside a board of directors who ultimately wish to depose him. When Deeds is placed on the board of directors for the opera, he’s little more than a figurehead because his uncle financed the committee. Deeds garners his “presidency” through an influx of wealth, moving into a house reminiscent of the famed White House. Deeds can’t fathom why everyone in the city is interested in his newfound money, there are countless millionaires in the world, right? With Deeds, he’s important because he’s a standard-bearer for the people, a local boy makes good who can help those like him because he was them. When Deeds implements a recovery act helping the city’s farmers is reminiscent of Franklin D. Roosevelt’s Agricultural Adjustment Act, a bill enacted to help farmers get through the Depression. Gary Cooper veers as far away from the macho persona he embodied in his Westerns as possible with Longfellow Deeds. Deeds is a fleshed out character with interests and a history in Mandrake Falls, and yet he’s idealistic to a fault. There’s a child-like innocence to the character meant to remind the audience of how eager we once were before the brutalities of the universe sought to crush us into dust. Deeds slides down banisters and is prone to temper tantrums, but he’s also principled; when it’s revealed his uncle might have a penchant for prostitutes (Frank Capra!), Deeds is horrified there’s a world where women are treated “as if they were cattle.” Amen, Longfellow! Cooper, in the role, is quiet with a laconic drawl, as if Deeds isn’t interested in keeping up with the times; he’s content to meander the world slowly. Later on, when Babe’s betrayal is revealed, Cooper’s face becomes a canvas of emotions as tears glisten and a hint of a smile is revealed.

With Deeds as a bastion of purity, it’s trying watching society beat him down. It’s Deed’s wide-eyed wonderment at the advancements of technology – what makes America the land of the free and the brave – that seduces Babe Bennett, and yet his optimism turns him into something to ridicule. Deeds learns a lot of harsh lessons, like fame isn’t equated with goodness.  But without Deeds we wouldn’t have the reminder that people “work so hard at living, they forget how to live.” His eventual deterioration brings him to the point where he can’t show concern for the downtrodden. Our cynicism against helping others invades him; he’s so upset with being tricked himself, why stick his neck out to get tricked again?

Thankfully, Deeds finds warmth and happiness with Babe Bennett, and Jean Arthur captivates in the role. I’ve always enjoyed Arthur’s wit and blending of glamour with determination. Babe believes she’s become tough dancing in the city lights, but she has a similar child-like love for herself as evidenced by the various kids games she plays in the newspaper office. She’s the solitary female reporter at her newspaper, and while she’s stuck using her feminine wiles to secure a story, she’s the only shot at success. Talk about Capra’s witty way of blending stereotypes with mutual acceptance and success within them. And Babe certainly isn’t above laying it on thick, getting Deeds affection with her pitiful declaration, “I’m really just a nobody.” Girl couldn’t be a nobody if she tried! Deeds and Babe’s romance is natural, blossoming through her respect for his confidence in humanity. When Deeds gives a heartfelt declaration of love for Babe via poem, it works, but is saved from being too sweet by watching Cooper stumble around and trip over trash cans as he runs away from her.

The lone issue I had with the film as a whole was the length. It’s almost two-hours and the final twenty-minutes dealing with Deeds’ time in a sanitarium and eventual court trial for competency runs long. It wraps up everything, and puts the final morality nail in the coffin, but also plays like a moment of utter speechifying. It’s a nitpick, though. Mr. Deeds Goes to a Town is a heartwarming slice of Americana with picture-perfect performances from Jean Arthur and Gary Cooper. 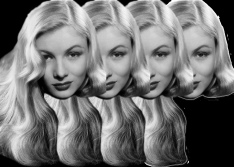