As I mentioned in my review of Hush…Hush, Sweet Charlotte, actors and actresses on their way out of the spotlight ended up taking roles that shattered their past personas, generally in the horror or thriller genre. Davis, more than any other actress, best exemplified the “downhill slide” of acting. The Nanny is considered the apotheosis of her descent into A-list loon.

Joey Fane (William Dix) is sent off to a reform school/mental institution after being accused of killing his little sister. Upon returning home, he believes his Nanny (Davis), who he accuses of killing the little girl, is also planning to dispose of him. 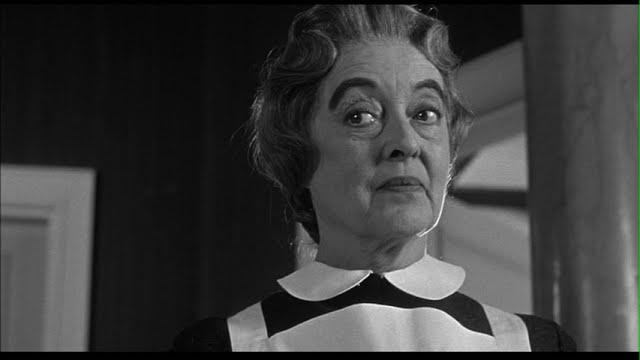 The Nanny was the best reviewed non-supernatural film Hammer Studios put out in the 1960s, partly due to Davis’ presence as she continued riding the wave post-Baby Jane and Sweet Charlotte. The problem, much the latter film, is The Nanny relies too much on “Crazy Bette.” There’s a solid build-up once Joey arrives home as to whether Nanny is truly insane or not. With a brisk 90-minute runtime, over half the feature shows the implosion of the nuclear family and how they were functioning in Britain at the time.

I’m no British scholar, but there’s a staunch formality to events when Joey returns. His mother, Virginia (Wendy Craig) suffers from a malaise or depression after the death of her daughter, unable to get out of bed and resentful of her son. Her husband, Bill (James Villiers) cries that Virgie needs to raise her son and be a mother fall on deaf ears, and as we watch Nanny do all the important tasks around the house it’s evident Virgie is merely a figurehead in the home. I’m not sure how far or if women’s liberation progressed in Britain, but both Virgie and her sister, Pen (Jill Bennett) are treated like children by Nanny. When Joey asks his father why Nanny – who doesn’t command a name outside her job description – doesn’t leave since he’s older, father replies Virgie needs her. A tense dinner table sequence where Virgie takes to her bed and Bill leaves for the club exemplifies this nuclear family going nuclear.

However, The Nanny isn’t billed as a comment on society, it’s a thriller. The question is whether Nanny or Joey is evil, and there’s certainly a good amount of motive for each of them. As Nanny and Joey circle each other, with Joey’s claims of Nanny trying to poison him and Nanny’s good-humored acceptance, the cat and mouse game intensifies. The reveal of what happened to little Susy (Angharad Aubrey) is sad, especially as Nanny responds to events, dreaming a scenario where Susy is alive. The mistake of young children who take things literally, unable to define fact from fiction, would have been an intriguing road to take. Unfortunately, we go straight to crazy town by the end with Nanny being evil as sin. There is an attempt mitigate her villainy – she’s had a mental break and a guilt complex over Susy’s death and her own failings as a mother – but it’s hard to reconcile that with her attempted murders of Joey and Pen.

Davis is good in the sparse moments where she isn’t acting insane. There’s a silent fear running through the character. If looks could kill, Davis would be a mass murderer. William Dix and Pamela Franklin as the two children are wonderful. Their interactions are genuine, and there’s nothing overly adult about them (outside of a cheeky “doctor” sequence). I’m also tempted to praise Craig’s Virginia. She certainly conveys the emotional turmoil of a woman whose broken over her child’s death, but too often her sobbing and wistful “oh, my” dialogue comes off as overacting.

The Nanny isn’t as terrible as I anticipated, but the tone isn’t anything exciting. There’s an accumulation of events leading to a psychological pay-off, or at least an unexpected ending. Instead, there’s just too much of what we’ve watched in previous Davis films of the period.