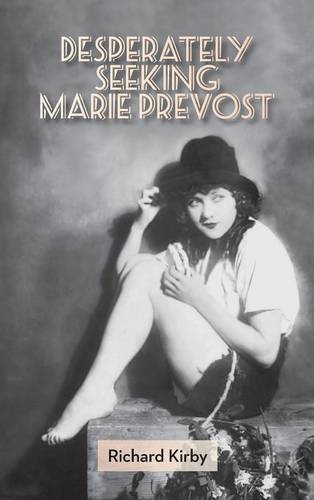 Writing a biography is a challenge (understatement of the century), and the challenge only increases depending on how much information on your subject is readily available. Richard Kirby has his work cut out for him with Desperately Seeking Marie Prevost, a good beginner’s guide for those uninitiated with Prevost’s work.

Marie Prevost had a meteoric rise to fame before succumbing to the consequences of malnutrition and alcoholism at the age of 38 (or forty as Kirby asserts). The lives of silent film stars are hard to track, particularly when taking into account changes in age and biography to fit the studio system. Kirby tracks down as much as he can on the star, relying extensively on magazine interviews she gave. There’s a lengthy bibliography in the back, great for those hell-bent on authenticity, although Kirby cites Darwin Porter at one point who, fans of biography know, isn’t so much authentic as it is enjoyable fiction. At barely one-hundred pages Kirby isn’t shy about admitting his research is exhausted, forcing the biography to a conclusion. It would be interesting to see him further hone the book and maybe put out a second volume with interviews from film historians or someone.

In the brief pages within Kirby charts Prevost’s rise to prominence, albeit the films tend to get muddled because so many of her earlier appearances are unconfirmed. He looks at her losing her father at the age of one year old, and the horrifying car crash that took her mother. As her star rose, Prevost found herself in a slew of failed marriages and relationships. The most interesting element, and the one that’s hardest to find anything concrete on, is her issues with weight and drink. The alcoholism comes out of left field, despite Kirby’s assertions it was always a constant presence in her life. The focus on her weight shows off Prevost as the first actress to be fat-shamed in cinema. It’s a horrifying turn of events, especially when set alongside stills from Prevost’s films that show she wasn’t at all overweight or obese; she was, by Hollywood’s standards, fat, and that ruined her. In barely a hundred pages Kirby leaves you sympathizing for Prevost, wishing that someone had been there to tell her everything was okay even though Hollywood’s done little to fit their own issues with weight.

Having never read Kirby’s work before, he’s definitely an acquired taste, presenting a fresh and relaxed take on the celebrity biography. He’s conversational, inserting “I” and giving his personal opinions extensively. Many biography formalists will be shocked at his laconic style, but in a book like this, where information is so scarce, it’s nice to have someone be honest about the biography process. This can tip into Kirby giving his own personal theories about Prevost’s life, but again there’s not much out there to prove or disprove his conjectures. He also recounts movie plot summaries in the past tense, a pet peeve of mine as it goes a bit too far into lack of editing as opposed to a dialogue.

Take all that away, and Kirby provides a sensitive portrayal of Prevost’s life based on the scant knowledge about her. I doubt anyone could do better in the information department, even if their presentation adhered to the more formalistic approach to biography writing. Bear Manor Media, the publisher releasing this, is one of the few publishers willing to take on risky subjects like this (I’m beyond excited to crack open Kiss Tomorrow Goodbye: The Barbara Payton Story, and Famous Enough). If you’re a novice fan of silent filmmaking, or want to learn more about Prevost, this is a good start.

Interested in purchasing today’s book? If you use the handy link below a small portion is donated to this site! Thanks! ‎

One thought on “Desperately Seeking Marie Prevost” Leave a comment ›