It’s always a bad idea for me to watch a Tudor drama.  My rampant love and overabundance of knowledge has the tendency to color my perspective of any Hollywood attempt to cash in on the story of Henry the VIII and his descendants (or acquaintances, or really anyone who strolled through the time period). However, that’s not to say any and all Tudor biopics are terrible. Anne of the Thousand Days is one of my favorite movies of all time, and it takes its share of historical liberties. If you’re interested in reading more of my thoughts with regards to Tudor dramas, I reviewed Elizabeth way back when and The Virgin Queen.

A filmmaker can take liberties with history, if said liberties aid in the overall entertainment value of the completed work. John Ford was biding his time before his hit Stagecoach, a landmark film (one of several) in 1939, so decided to take a look at doomed Scottish queen, Mary of Scotland. The end result is a generic romantic take on a politically divisive, and complex, heroine. Fraught with abundant close-ups and grand monologues, Mary of Scotland contains all the intrigue of a dishtowel.

Mary, Queen of Scots (Hepburn) must rally her country in order to prevent Queen Elizabeth (Florence Eldridge) from taking her throne. Domestically, Mary finds herself torn between the love of her people and her love for Bothwell (Fredric March).

Historically, Mary of Scotland falls into the same traps as countless Queen Elizabeth biopics, or really any movie in the “monarchy problems” genre.  I’m coining that term! In almost all of these films political turmoil is at the forefront, and the monarch (generally a woman) is at the mercy of her people, her heart, and the men controlling her court. Generally, these movies spend time developing the romance in order to place it on an equal pedestal with the issues of the country. You don’t want the audience saying “That guy’s hot, but I doubt he’s worth giving up an entire country over!” Even Audrey Hepburn thought Gregory Peck wasn’t worth giving up her crown for!

Unfortunately, Dudley Nichols’ script for Mary of Scotland is wrapped up in grand speechifying and grandstanding that the romance fails to take off. Bothwell and Mary meet, hate each other, and a few scenes later are passionately in love. Did we skip a few steps in the rituals of courtship? At the 90-minute mark, the characters go back and attempt to establish their long history together. Mind you, there’s a lot of historical debate on whether the relationship between Bothwell and Mary was romantic or even consensual. A few historians allege Bothwell assaulted Mary before forcing her into marriage! Obviously, that angle lacked the trappings of a romance.

The story itself is so boring the only way I stayed awake was nitpicking the historical fallacies! The actual history and feud between Mary of Scotland and Elizabeth I is infinitely more fascinating than the staid romance/historical drama presented on-screen. In lieu of any historical emotion, we get a catty drama wherein Queen Elizabeth is the pettiest ruler on the island of Great Britain, who despises Mary because she’s found a man and bore a child. Elizabeth was content to remain the “virgin queen” and knew she wouldn’t have a blood heir so the story becomes nothing more than an international catfight. This could have led up to some great confrontation between the two rulers, but by the end the movie’s 123-minutes are exhausting and Ford direction practically ushers Hepburn to the chopping block.

Hepburn is horribly miscast as the French-born ruler of Scotland. In fact, Mary of Scotland was partly responsible for Hepburn being labeled “box-office poison.” All the major cast members either forego accents entirely, or, in the case of John Carradine, sound like Mario ordering a pizza “with-a extra-a anchovies.” As much as I love Hepburn in comedies and other works of drama, she comes off as Katharine Hepburn in bell sleeves declaring “the calla lilies are in Scotland.” Could she not have at least feigned an English accent? Ford’s camera is practically obsessed with Hepburn’s face (and what a face it was!), although the amount of close-ups becomes tiresome. Hepburn certainly possesses a flair with the written word, and, if anything controls the script’s mouthy dialogue with a deft hand. Her speeches are eloquent and emphatic, a must considering the abundance of them. 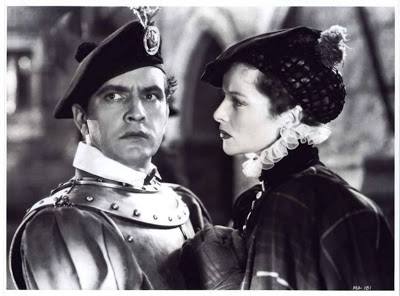 Fredric March continues to defy me with great performances (see my review of Smilin’ Through), and he’s the actor who closely inhabits the period. His Scottish brogue is passable, and at least he tries to sound like he’s from the country he claims. Bothwell is charming and a rascal, right down to the rather scandalous scene of March lifting his kilt to warm his nether regions on an open fire (yep, you read that correctly!). It’s a shame this movie just didn’t tell an original story set in that period because March pulls it off. Unfortunately, everything about this movie is so keyed-in with Mary that Bothwell disappears after 90-minutes and no one appears to care!

And I have to mention the sets for this movie. Stagecoach wasn’t filmed on-location, but felt immense due to the variety of locations, the expedition in the narrative, and Ford showing the ceilings in the buildings where characters were staying to convey they weren’t one with the surrounding sets. He must have been intent to correct these faults started with Mary of Scotland. Mary’s castle and court (there’s no distinction because we never see beyond Mary’s front porch/courtyard) look like the same sets as Dracula’s castle, and characters are either going in or going out. We never once venture beyond Mary’s castle, and if we do, it’s to show the interior set of Elizabeth’s palace. Is there some bizarre white space of nothing the minute characters leave either area? Are they trapped in that weird under-the-bed third dimension (if anyone gets that reference, you’re tops with me)? For a movie focused on the lush lives of monarchs, they’re living on the cheap or just ruling their own houses.

I could go on and on about this movie; like how it turns Mary’s consort, Lord Darnley (Douglas Walton) into an earring wearing, tantrum-spewing man-child.  Or Mary’s utter inability to make smart political decisions because her emotions get in the way (us lady rulers). If you’re a Hepburn completist, or want to watch what Ford was doing before the epic highs of Stagecoach, by all means take a run at Mary of Scotland. Just expect little in the way of history or entertainment. Fredric March is the only highlight….I feel weird saying that. 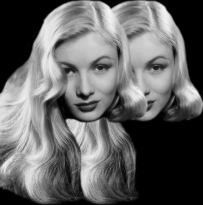