Ugh, is it December already? A very belated news update is below, including news on another Lifetime biopic, some TCM and television news, and what’s coming out on DVD and Blu.

Hope you’re not sick of Marilyn Monroe already, what with the near endless stream of biopics – both in cinemas and on television – that have been made since her death. Lifetime has decided to enter into the game, apparently thinking they could strike lightening twice after the Liz & Dick ratings (oddly enough, I saw Blonde on Lifetime long ago). The Wrap reports that Kelli Garner will play the blonde bombshell in a biopic based off the biography by J. Randy Taraborelli (which I haven’t read yet). Adding a dash of class is veteran actress Susan Sarandon who will play Gladys, Marilyn’s mentally unhinged mother. The addition of Sarandon continues her path of playing Hollywood mothers after starring in the Errol Flynn movie The Last of Robin Hood. Garner herself also has biopic roots, playing Faith Domergue in The Aviator. I’ve always wondered why Garner doesn’t have a bigger career and, no offense, at this point she’s the poor man’s Jessica Chastain (not a bad thing!). If there’s a few more character actors involved in this it might not be a total disaster.

getTV has announced their November schedule. This month they’re honoring Judy Holliday every Thursday at 7pm, culminating with a Thanksgiving holiday marathon showing five of her films including The Marrying Kind and It Should Happen to You. Other stars set for tributes in November: Cary Grant, Dyan Cannon, Richard Burton, and Evelyn Keyes. The full getTV schedule is up on their website.

TCM has announced their latest A Night at the Movies special, this time spending an hour with director George Lucas talking fantasy films. The one-hour special, TCM Presents A Night at the Movies: George Lucas & the World of Fantasy Cinema will discuss the whimsy of fantasy films as well as kick off a 24-hour salute to fantasy movies with The Secret Life of Walter Mitty, The Thief of Baghad, and The Seven Voyages of Sinbad, among others, all scheduled to air. The special airs November 25th at 8pm ET.

Also TCM related, the upcoming Bonham’s auction, TCM Presents: There’s No Place Like Hollywood, has acquired one of the “holy grail” costumes of cinematic history that can be yours if you have deep pockets; the Cowardly Lion costume worn by Bert Lahr in The Wizard of Oz! Countless other priceless items are also being auctioned off, such as a test dress worn by Judy Garland in Oz, countless costumes, and various portraits painted for certain stars (one of which is Veronica Lake’s portrait I’d kill to own!). Two preview exhibitions of the items will be held: one in New York November 20th-24th, and the other in Los Angeles November 6th-9th. The auction itself takes place Monday, November 24th. 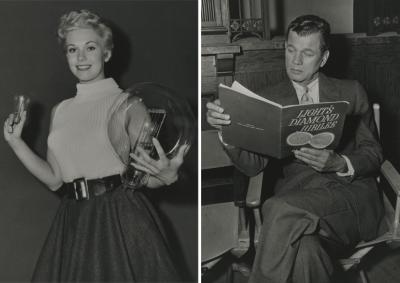 If you’re in the Los Angeles area next in November be sure to stop by the Billy Wilder Theatre in Westwood Village. The UCLA Film and Television Archive is presenting the rarely seen Light’s Diamond Jubilee, a 1954 television tribute to the electric light. It included an all-star cast including Joseph Cotten, Lauren Bacall, and David Niven, certainly enough stars to power said light. The presentation takes place November 9th at 7pm with special guest Daniel Selznick, son of producer David O. Selznick. Full details and ticket info is up at the UCLA website.

Warner Archive: Robert Blake and silent films rule the day with this week’s new releases. Two of Blake’s films, from various points in his career are now available for purchase: Mokey (1942) starring Blake and Donna Reed, and Revolt in the Big House (1958). Warner also receives the newly restored copy of Colleen Moore’s Why Be Good? (1929), originally considered a lost film. The studio’s also releasing John Gilbert’s The Cossacks (1928). Since I missed last week, you can also snag Joan Crawford’s Possessed (1947), newly transferred to Blu-ray. All of these are available, manufactured on-demand, at Warner Archive’s website.

Fox Cinema Archives: Fox Cinema Archives has been rather consistent in their new releases. There’s two for this week: Manila Calling and The Young Mr. Pitt (both 1942). The studio has also revived the Michael Shayne – private detective – series with the release of Just Off Broadway (1942), the sixth of seven movies featuring Lloyd Nolan’s detective. You can also purchase Roddy McDowall in On the Sunny Side (1942).