Anne Baxter played the calculating Eve Harrington in the 1950 drama All About Eve to grand aplomb. Eve is a character so villainous you’re left dying for some type of comeuppance. Well, if you didn’t find the end of that film satisfying, jump ahead eight years to this thriller. Chase a Crooked Shadow borrows liberally from the director of suspense, Alfred Hitchcock, to create a crafty little thriller with some genuine surprises.

Kim Prescott (Baxter) is a wealthy heiress living well in Mexico. A man appears one night, claiming to be her brother Ward (Richard Todd), but Kim is horrified because Ward died in a car accident a year ago. Or did he?

Chase a Crooked Shadow is an old-fashioned thriller steeped in Hitchcock tropes. Although, considering Hitchcock was the foremost director of suspense during the period it must have been near impossible for other directors not to feel his influence. Director Michael Anderson – best remembered for directing the sci-fi classic, Logan’s Run – invokes the Master of Suspense with an ominous  tone, vaguely sci-fi in itself, starting with our introduction to “Ward” and his female colleague studying Kim’s movements. It’s apparent this is not Ward, a presumption that might leave you feeling as if the movie’s already tipped its hand. How can you believe Kim’s friends and family won’t realize this isn’t Ward when we already know?

Surprisingly, this is a crooked shadow you’ll end up chasing with several subtle red herrings. Yes, this man isn’t Ward, but what are his motivations? Is he a spy? A thief? While the audience struggles to ascertain Ward’s motives, jointly solving the mystery with Kim, they’re pulled away from figuring out the real trick the plot’s got up its sleeve. The Twilight Zone debuted a year after this film’s release, and with such a brief, 87-minute runtime, Chase a Crooked Shadow comes off like an extended episode of that legendary series. 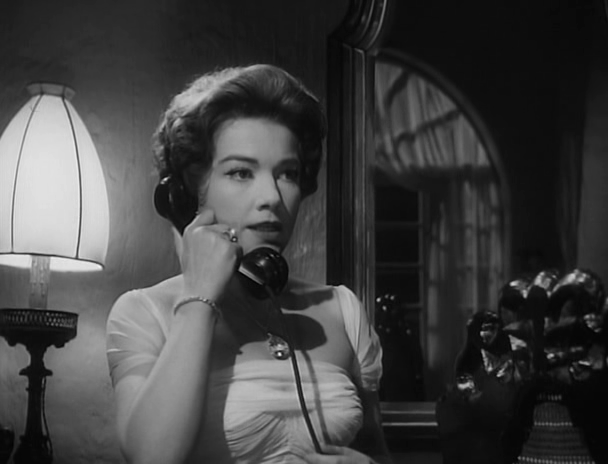 The film doesn’t rush despite knowing its time is brief. We’re introduced to our two major characters, and from there it becomes a cat-and-mouse game of Kim attempting to expose Ward as a fraud. Simultaneously, Ward is strengthening his claims by pointing out Kim’s mental instability and time in an institution. The script plays with the audience, introducing a family member who will surely end the film by proving Ward’s falsity…only to tell Kim the man is really Ward!

Anne Baxter personified the mean girl in All About Eve, but her Kim Prescott could be Eve 2.0, or at least presenting to us the life of luxury she found post-Hollywood. Of course, Kim’s life becomes a living hell with Ward’s arrival, pushing Kim (and Baxter’s acting) to the limit. Baxter doesn’t turn the character into a crying mess, an easy solution for a character like this, and instead has her hide her fear internally. And yet, just as believable as Baxter’s fear is Richard Todd’s righteousness.

Richard Todd is spellbinding as Ward, channeling a darker Cary Grant in Suspicion. When Ward walks calmly up the steps into Kim’s apartment, there’s an air of foreboding negated by Todd’s amiability. He truly feels he lives there and so he does. Even in his early interactions with Baxter there aren’t threats, but a pervasive feeling of power and control. As the two are drawn closer and closer together an added twist comes through via romance. Since we already know the two aren’t related, their flirtation is excusable if still unsettling.

With a rapidly dwindling runtime the race is on for Kim to prove the man playing Ward isn’t really her brother. Again, much of the impact could be deflated because of the audience’s awareness, but instead a thrilling twist leaves the audience why Kim is so convinced Ward’s dead? The rest of the plot turns towards questions of fraud, swindling, and, potentially, murder. Revealing too much of the narrative layout does a disservice to a film predicated upon the assumed knowledge the audience knows. By the film’s conclusion you’re left wondering how much of what the audience was privy to is a red herring. This is all due to the thrilling script by David D. Osborn and Charles Sinclair – the latter was well-versed in scripts of the mystery/thriller variety. The script’s awareness of where audience’s minds will go is uncanny, and while the ending fails to live up to all the promise established in the opening, it’s a fantastic means of getting the audience to rewatch with their newly acquired knowledge.

Chase a Crooked Shadow sets up a twisty-turny narrative packed with suspense. Richard Todd and Anne Baxter’s devoutness to their roles is amazing. A nifty little thriller that deserves additional recognition.