The later one travels into the cinematic landscape of the 1960s, the deeper down the proverbial rabbit hole you’re gonna go. Hollywood was in a precarious position and many of the old guard, Hollywood A-list crowd floundered to assert themselves in a changing landscape where they were seen as passe. The more ingrained in the studio era you were, the more assured you were of failure. One casualty was Jennifer Jones. Despite being a multiple Oscar nominee – winning in 1944 for The Song of Bernadette – Jones was incapable of shedding Bernadette’s cowl. (Her marriage to David O. Selznick, who tried his damndest to strengthen her starpower, and her precarious mental health didn’t help.)

Cult of the Damned aka Angel, Angel Down We Go was the first film Jones starred in following an unsuccessful suicide attempt (and after Jeanne Crain passed). I hate to say it, but this movie must have only increased Jones’ depression. Cult of the Damned is part rock opera, part counterculture exploration, and full-on nonsense. Jones leads a rather eclectic cast, including Roddy McDowall, Jordan Christopher, and Lou Rawls, but where she leads them is anyone’s guess.

Tara Nicole Steele (Holly Near) is the pampered, unattractive daughter of the world’s wealthiest couple. Unfortunately, her chubby body and face make her the bane of her mother, Astrid’s (Jones) existence. After fleeing from her debutante ball, Tara takes up with a charismatic singer named Bogart Peter Stuyvesant (Christopher) who wants a way of entering Steele way of life. 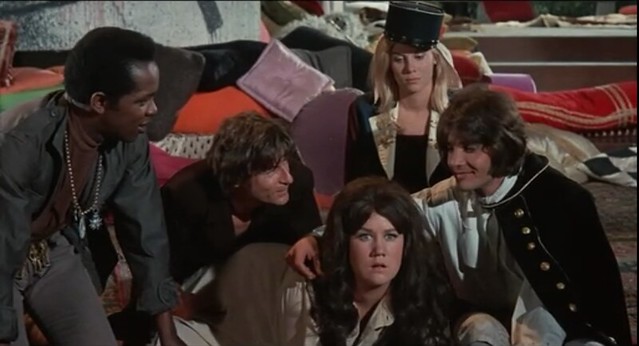 In the wake of the Manson killings movies tried their hardest at capturing the moment in cinema. Thus there’s a wealth of late-1960s movies dealing with cults or gangs of wealthy teenagers trying to tune in, drop out, and whatever. Bogart Peter Stuyvesant – a name that only hints at the pretensions the movie uses him as a mouthpiece for – has that Manson vibe…if Manson was a good-looking Jim Morrison type who wore leather pants. And his followers are a hodgepodge of stoners despite the questionable presence of McDowall, wandering in a daze, and Rawls. There’s never a proper “cult” atmosphere outside of they’re more than a group of three. A cult would imply mind control with a dark purpose, but Bogart never declares a purpose short of irritating the Steele household, no grand plan for world domination or a plot to make drugs legal…something!

The opening introduction of the Steele’s implies some type of body acceptance story I would have enjoyed watching develop. Tara Nicole is the dirty secret of the Steele family with Astrid creating a large debutante ball as a means of making a silk purse out of a sow’s ear. Tara knows where she stands with her mother; her curvy body and face – actually she looks like a brunette Amy Schumer – puts her at odds with the lithe Astrid. (Jones wardrobe consists of diaphanous sheets, all oddly worn backwards and open at the back.) A poignant moment where Astrid admits the ball is a means of living through her daughter while trying to cover up for her daughter’s physical flaws, speaks more towards the vain, body obsessed world we’re living in now. For all the ways it shows how little we’ve changed as a society, the “cult” shoves this into dated territory when the family element works best.

In a sea of non-stop oddities the movie’s core plotline involves musical performances and an emphasis on skydiving. The former comes through with Bogart and his band, leading to several sitar-infused songs that represent everything you’ve assumed about the 1960s. The title song, “Angel, Angel Down We Go” is catchy and sets up the basis of every song thereafter…it all gets rather repetitive after awhile. The way songs are introduced are rather laughable, and when Christopher sings to Jones it’s easy to see the glazed-over look in her eyes. Not even she understands why he’s singing to her.

This brings up the question of what Bogart and his group actually want? The script never makes it clear whether Bogart and his group want to watch the world burn or just want a nice place to sleep. Jordan Christopher’s swagger puts him up against Jones, who he handily seduces, but the movie ends with them skydiving their problems away and him paddling Tara’s father?! The entirety of his philosophy is wrapped up in grandiose, pretentious equivocations about the world, wealth, and whatnot but it just sounds like the posturing of a kid who wants everything but doesn’t feel the need to explain why…he just wants it. In fact, the entire movie is spoken in stoner speak, complete with characters literally climbing on the ceiling, leaving me to believe I had to be high to understand it.

The actors all seem rather committed to their roles, despite the embarrassment of playing the characters. It’s hard watching Jones in this, akin to watching Veronica Lake in Flesh Feast. Jones is still an exquisite looking woman, floating through scenes swathed in diamonds and other jewels. There’s also some rather funny dialogue given to her as she elaborates on her past as a stag actress. If you’ve always wanted to hear the sweet-faced Bernadette say “I’ve made thirty stag films and never faked an orgasm” here’s your chance! McDowall is always fun to see but he’s not given anything to do! Jordan Christopher looks like a charismatic guy in the vein of Malcolm McDowell or Terence Stamp. Holly Near is also rather sympathetic as the tortured Tara Nicole. Again, had the movie focused on how men aren’t interested in her, that she’s in competition with her mother, it could have helped.

Cult of the Damned will appeal to audience of the psychedelic cinema of the late 1960s. It makes little sense but it’s worth watching to watch Jones and the other actors struggle to figure out what it all means. Kino’s recent Blu-ray release looks and sounds wonderful, particularly if you enjoy the soundtrack. This is one that appeals to a niche audience and if you’re a member of the crowd, dive in.

Cult of the Damned

Cult of the Damned [Blu-ray]