Nothing Sacred was ahead of its time, prophesying a world where tragedy and doom were glorified by audiences. You could say that, really, the film was touching on a problem that always existed, but you can’t deny it’s an appetite that’s gone global, beyond the small town Carole Lombard’s Hazel Flagg called home. Hazel’s story will “make this town swoon,” and you will too!

Wally Cook (Fredric March) is a reporter for the Morning Star newspaper who learns about a woman in Warsaw, Vermont with a terminal diagnosis due to radium poisoning. Wally sees the woman, Hazel Flagg, as the poster child for struggling over adversity, and her impending death will help the paper – and his stock as a reporter – rise. Unfortunately, Hazel’s been misdiagnosed and is healthy as an ox.

Something about Hazel’s story appeals to me personally: the idea of a person’s presumed “tragedy” in life being fodder for other people’s consumption which makes them, in turn, feel better about themselves because another person is doomed (yes, I have heard this logic given to me). Hazel’s story rings true in a world where television “news” pundits get famous off digging up salacious stories when tragedy occurs. Wally is the Nancy Grace of the 1930s, everyone! As we’re told in the opening “Where the Truth rises to Earth more phony than a glass eye,” Hazel doesn’t ask for fame, nor does she ask for death. She’s a victim of circumstance pushed around on a tide of publicity, first for being sick then for not being sick. “It’s kind of startling to be brought back to life twice.”

Especially in 1930, it’s surprising how Hazel isn’t villified for taking advantage of her illness and fame. If America is going to use her as mass catharsis, why not find ways to get rich off it? Unlike the work of Preston Sturges – Christmas in July for example – where the mix-up leads to conflict and there’s sadness about it, Hazel doesn’t immediately feel that. Society is the corrupt one, desiring her death and then being aghast when she isn’t what they’ve dreamed of; she’s the dream girl because she’s ill and set to die. Her living angel quality becomes more ironic and grim in light of Lombard’s death just a few years later. Lombard’s enthusiasm keeps everything from devolving into grimness, and also prevents the audience from turning against Hazel. As she enthusiastically lists off symptoms Wally tells her to stop acting happy because she makes him sad. Too often other characters want Hazel to act like the depressed terminal patient who can’t find any beauty in the world. Because other people feel uncomfortable, Hazel must be uncomfortable (another thing her and I share).

Lombard and March play well off each other as each has their own brand of hostility working for them; Lombard is the Queen of the Tantrum while March is a cynical opportunist. I was a bit aghast at the brawl sequence that graces the movie poster. There’s context for it, but never enough for me to believe Lombard deserves a punch in the face by March. She gets a chance to deck him as well, but it’s more a consolation punch than anything else. March plays a role that Cary Grant would have done had he been available. I did smile at March playing a character named Wally five years before playing Wallace Wooley in I Married a Witch.

Not everything works within Nothing Sacred, although many of them were personal squabbles. The dolls in the opening credits were downright terrifying and I was unsure if they were meant to lampoon political cartoons? The town of Warsaw also has some rude people. Upon Wally’s arrival they spit at him, try to bite him, and imply that he smells. For supposedly simple, small-town folk they’re pretty judgmental and rude!

Nothing Sacred is a biting satire where a moment of silence happens for a character who isn’t dead yet (I wished Hazel had said “I’m not quite dead” a la Monty Python). Hazel’s suicide/goodbye note is also hilarious for how the two sound similar based on the context. Nothing Sacred is a self-reflective commentary on ourselves and our appetite for tragedy…with a lot of wacky hijinks to keep you from feeling too terrible about yourself. 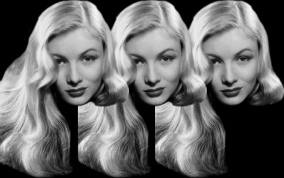 Own It on Blu-Ray