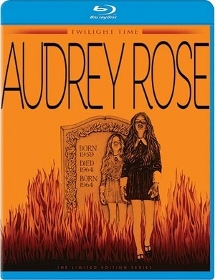 With the passing of each generation it’s fun watching classic films to take in (and lampoon) fashions, hairstyles, or narrative ideas. In the 1970s and 1980s you got countless films fearing demonic possession and Satanic cults in light of the Manson Family trial. And yes, the 1970s was best exemplified in the hippie. What if someone made a movie about hippie ideals like reincarnation, but meant to present them to you as a serious case study? You’d get the laughable Audrey Rose! Audrey Rose, based on a novel by Frank De Felitta (who also wrote the script), takes The Exorcist, strips away the terror and slathers everything in artery-clogging ham.

Janice and Bill Templeton (Marsha Mason and John Beck) struggle to understand why their daughter Ivy (Susan Swift) suffers from horrible nightmares. A mysterious man named Elliot Hoover (Anthony Hopkins) starts following Ivy and tells Janice and Bill that Ivy is the reincarnated spirit of his daughter Audrey Rose. As Elliot fights to get the couple to believe, it threatens to tear everyone apart, including the impressionable Ivy. 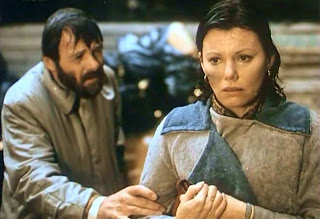 It does’t hurt me that this is a sappier take on The Exorcist, but that it was directed by legendary director Robert Wise. I highly doubt Wise put Audrey Rose alongside West Side Story or The Sound of Music. But Wise did enjoy sentimental melodramas – look at something like the appropriately titled I Want to Live! – and Audrey Rose shows there’s nothing to be afraid of regarding death and the unknown. Other than Ivy’s attempt to fling herself into a bonfire at her school – one of the film’s few jokes is Bill asking why the hell a school would have a massive, unguarded fire on the playground – there’s nothing threatening to Ivy before Hoover’s arrival. Her nightmares are intense, causing her physical harm, but they seem limited to her sleeping hours.

The Exorcist described female adolescence as a nightmare. That, coupled with Ellen Burstyn’s working mother, presented a picture illustrating the destruction of the nuclear family and the horrors inherent in the rise of women’s liberation. Audrey Rose undoes all that with a nuclear family at odds due to the father’s negligence of his family. Make no mistake, this movie may be about a little girl, but it’s about two competing men with two warring schools of thought. Beck’s Bill is perpetually angry when he bothers to show up at all. The script gives him brief interactions with his children, but it’s apparent his method of childraising is wrong and who could blame Mason for falling into Hoover’s arms (or at least seeing reincarnation as a possibility?). Hopkins’ Hoover is quiet and gentle with Ivy, as well as going through hell and back to prove she’s his child; his love for Audrey Rose transcends time compared to Bill’s seeing his family as objects. If this comparison isn’t overt by now, the script makes a point of labeling Bill an atheist as an added layer of America’s turning away from organized religion (yet Ivy is sent to a Roman Catholic school…go figure).

Much like the attack on atheism, De Felitta’s script is devout in its beliefs and if you disagree…too bad because people like you barely register in the film’s world. Ivy’s nightmares and Hoover’s interference in her life becomes so intense he ends up kidnapping her in a scene where the police could care less. Apparently the 1970s had lax rules about grown men taking children that weren’t theirs back to their apartment. The third act becomes a courtroom drama intent on proving reincarnation. Unfortunately, this isn’t Inherit the Wind and whether you believe in reincarnation or not, the movie presents nothing in the way of an argument for or against. The only “expert” witness for the defense is a Buddhist priest of some sort, and even then he’s given one line and that’s all. The argument is supposedly Ivy’s hypnosis in the film’s final minutes when she reverts back to Audrey Rose. I just couldn’t get past the fact that Ivy’s life, at the end, should do nothing more than perpetuate a cycle she has no part in. Where does Ivy begin and end? De Felitta doesn’t know, and doesn’t bother to explain. Audrey Rose passes itself off as fact, or at least semi-researched, when it’s pure conjecture. A quote from the Bhagavad Gita at the end can’t stand in lieu of cogent research.

There’s nothing special about Mason, Beck, and Hopkins. This was one of Hopkins’ earliest roles and he’s the only actor not stuffing scenery into his face. His genuine adoration for Susan Swift’s Ivy shines through, which must have been tough considering how awful she is in the role. Mason is forced to cry throughout the entire film, while Beck shouts and complains from the minute he enters the frame till he leaves it. The worst offender is Susan Swift as Ivy. I know this was her first role, and when she’s playing an average kid she does okay. But 98% of the film relies on her to make you believe she’s being tormented by another entity. She conveys “torment” by widening her eyes and whining in a pitch only dogs can hear. Her lines all sound canned, and she’s just insufferable. Suffice it to say, I couldn’t wait for the end just to get away from her.

Audrey Rose is worth watching just to see how others were competing against The Exorcist, or if you’re a devoted fan of Robert Wise. Twilight Time makes the case for why it’s worthy of a Blu-ray release – especially Julie Kirgo’s essay – but this one is simply too stuck in its time period. 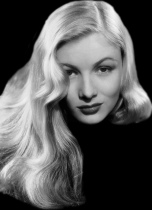