It’s always fun watching two movies with similar plots and released ridiculously close apart, and seeing which one is better remembered. In this case, there’s little director Roy Rowland could do with Witness to Murder that would make it stand out against the better regarded Alfred Hitchcock masterpiece, Rear Window. Hitchcock’s piece was released one month prior to this, leading Rowland and star Barbara Stanwyck to look like copycats. What diversifies Witness to Murder from its well-mannered predecessor, and thus making this a more layered film, is Barbara Stanwyck’s character and the relationship gender plays in 1954. KL Studio Classics certainly did a great job bringing this intriguing murder mystery to Blu-ray.

Cheryl Draper (Stanwyck) wakes up one night to witness her neighbor across the street (George Sanders) murdering a woman. Cheryl calls the police but they don’t believe her. As Cheryl tries to move on with her life, the killer starts planting ideas into her head, as well as the heads of the cops, that Cheryl is headed for a nervous breakdown.

At first blush, Witness to Murder plays like a companion piece to Stanwyck’s 1948 mystery, Sorry, Wrong Number. Where her character in Sorry believed she’d heard a murder – her own – Cheryl Draper actually watches a woman die across the street from her. Screenwriter Chester Erskine relies on the 1950s trope du jour of female hysteria. There’s no body and signs of struggle, sure, but the cops (one of whom becomes Cheryl’s love interest, played by Mr. Bette Davis, Gary Merrill) don’t believe Cheryl from the jump, mainly because Sanders is so dang charming – they’re not wrong – and leave Sanders with sage advice that the next time he commits a murder…he should close his drapes. The cops aren’t willing to entertain the notion of what Cheryl’s claiming at all, leaving the audience blaming Stanwyck’s femaleness as the reason she’s disbelieved.

Now, all of this could immediately date the movie, but it plays as a reminder of the harsh world for single women uninterested in living the Donna Reed life of the era. Cheryl is a successful interior decorator living on her own in Los Angeles, setting her apart as an outsider from conventional society. The cops don’t believe her because there’s no proof…and because she’s an oddball. Stanwyck is the only one who could play a so character tough-as-nails and uninterested in pleasing society. Cheryl is far more active than Stanwyck’s character in Sorry, Wrong Number with the agency and tenacity to prove she’s right. Sure, she spends a fair amount of time deferring to the cops claims that she dreamed it, but she never takes the events that happen to her lying down. When she’s committed – a fate that befell certain types of women in the 1900s through the 1950s – she refuses to compromise.

Rowland turns away from the contrived conventions of the mystery into a moment of truth with the institution sequence. Cheryl has been brought there because she refuses to capitulate to what Sanders’ character, Albert Ritcher, and the police want her to believe. Once inside the sanitarium she meets a possible nymphomaniac (Claire Carleton) and another man-obsessed woman played by Imitation of Life’s Juanita Moore. Both women have met a fate of confinement and imprisonment for their outsider status, and Cheryl isn’t planning on living that life. It’s a rather brief moment in the the movie, but Rowland treats it with the respect and deference it deserves.

The rest of the narrative plays rather rote. The problem lies in the lack of ambiguity given to Cheryl’s mental state. It would have been neat for there to be some possibility that Cheryl imagined the whole thing. Instead, the audience sees Richter murder the woman, they see him type up the threatening letters he’s being sent, and there’s no mystery involved. Speaking of Sanders, his Albert Richter is a cold, calculating Nazi menace. Yes, there’s a brief allusion to the continuing fears of Nazis amongst us. He’s a Nazi who’s made a life amongst the normal folk, and despite being set for remarriage the movie slyly alludes to him being in a relationship with a woman not his intended. He’s as much an outsider,  going against the norm, as Cheryl. Sanders lays on the suave demeanor. Envision Addison DeWitt as a Nazi murderer. He’s a worthy adversary to Stanwyck. If anything, the dominance and willpower of Stanwyck and Sanders makes Merrill unnecessary. He’s always Mr. Bette Davis to me, and while this is a fun reteaming of him and Sanders, you don’t need him. 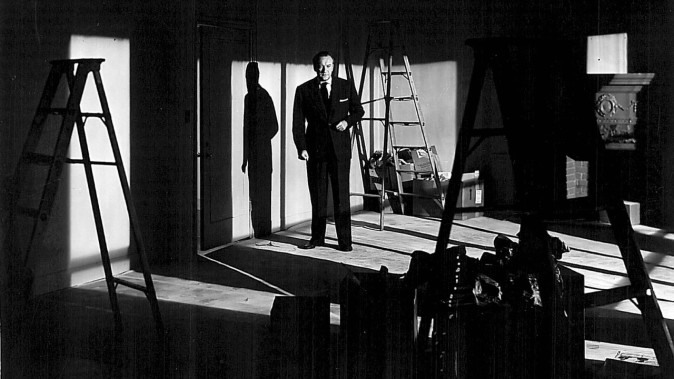 This a great one to watch side-by-side with Rear Window and watch how a swap of lead character changes everything. In many ways, Stanwyck presents a better examination of this story, where the disbelief makes the cops look inept for completely different reasons. Sanders is always great playing a villain, and I wish there was more buildup and scenes with him and Stanwyck. This was a surprising foray into 1950s mysteries and it continues to show Roy Rowland as a man who knows how to take something contrived and turn it into something memorable.