Stories regarding the grand search for Margaret Mitchell’s Scarlett O’Hara have passed into legend. With stories of practically every actress in Hollywood during the 1930s testing for the role, it’s hard fathoming anyone else wearing Vivien Leigh’s corset. The 1980s saw its fair share of biopics regarding Leigh and Gone With the Wind, from the Leigh/Laurence Olivier biopic, Darlings of the Gods in 1989 to the earlier couple-based biopic Gable and Lombard only hinting at GWTW. The Scarlett O’Hara War, based on Garson Kanin’s novel, details the numerous Cinderellas trying on O’Hara’s coveted slipper, but ends up making a mockery of the process with a sitcom-esque presentation, casting couch “humor,” and a bevy of forgettable ladies playing legendary icons.

David O. Selznick (Tony Curtis) hunts for the woman who will take on the mantel of playing Scarlett O’Hara in Gone With the Wind. His search takes him across the country, auditioning A-list stars, ingenues, and small-town girls.

For all the focus on the woman who’ll play Scarlett, The Scarlett O’Hara War is about the men who made the apotheosis of women’s pictures possible. Tony Curtis, in his fifties playing a man in his mid-30s, anchors the picture, stamping the film with his old-school Hollywood class as David O. Selznick. Because the film is a by-the-book adaptation, Curtis spends 97-minutes being frustrated and yearning, with clenched fists, to find the perfect Scarlett. He wines and dines Louis B. Mayer (Harold Gould) and has some sibling rivalry with his agent brother, Myron (Bill Macy).

The brunt of the film acts as a parade for a cavalcade of poor impersonations of some stellar actresses, all participating in what equates to a 90-minute classic film sitcom complete with freeze-frame looks at the camera (courtesy of our Ashley Wilkes). We focus primarily on actresses Paulette Goddard (Gwen Humble), Joan Crawford (Barrie Youngfellow), and Carole Lombard (Sharon Gless), although the likes of Miriam Hopkins, Joan Bennett, Katharine Hepburn, and Lucille Ball show up. The Ball cameo, especially, plays as one of a series of “wa-wah” moments with “Miss. Ball” wanting to see Selznick only to have him brush her aside, but not before she says her name is Lucille Ball.

The actress vaguely resembles Ball, in the way those hired to work at Universal Studios resemble the actress, but the intention is to leave the audience nudging each other and saying “Wow, THAT guy screwed up!” The odd vein of humor running through the film pretty much stays there, with character saying things that, with the benefit of hindsight are funny. Take Mayer’s declaration that he wants to cut “the rainbow” song from The Wizard of Oz. As a standalone line, it achieves the goal of making the audience smile, but it’s a technique repeated too often, leading to that ridiculous close-up on the Ball impersonator’s face.

Outside of the moments of hindsight, there’s a disturbing casting coach element that’s mined for laughs. Two sleazy “talent” agents make young women reenact the corset pulling sequence from the movie as a way of rubbing up on them and staring down their blouses. One agent even makes a girl kiss him before getting her into bed. The sitcom muzak implies that this is a funny sequence – “oh, those stupid girls!” – and leads to a third-act climax where Selznick might get into trouble for violating the Mann Act. Thankfully, the two dumb clucks who were seduced decide to flash Selznick some leg, he takes the bait, and it’s all resolved. The casting coach was certainly real, and there were women seduced with dreams of stardom by skeezy “agents,” but the movie plays it off like a gag and ends up demonizing the women; they’re so desperate for stardom, they totally wanted it! Selznick’s own seduction of Joan Crawford as her means of securing the role also seems to act in making these moments “part of the biz.”

Returning to the various actresses, several of them probably require nametags listing who they are for how much they look like their real-life counterparts. Hopkins and Bennett were probably  cast on the fact they had the same hair color as the real Hopkins and Bennett; the girl playing Hepburn in one scene has the accent down. Barrie Youngfellow has the Crawford profile and toothy grin, but she spends almost all her screentime throwing things at mirrors. Seriously, she breaks a mirror after learning Tallulah Bankhead (Carrie Nye) supposedly landed the part, and then breaks another mirror (did she buy a new one or is it the same one?) at the end. Nye is a fun, drunken Bankhead, but I have no history with Bankhead’s work so can’t comment on her resemblance or the film’s presentation of her.

The two couples here truly take the cake. Edward Winter sounds like Clark Gable but resembles Robert Goulet and Gless looks more like Lee Remick than Lombard. It isn’t hard playing Gable if you have the basic mannerism, but Lombard has no personality to her. She says shocking things like “butt,” this is a TV-movie after all, and throws her arms around a lot, but nothing distinctly identifies her as “Carole Lombard.” Clive Revill plays Charlie Chaplin as an over-the-top buffoon and Humble’s left to play the most unlikable Paulette Goddard I’ve seen. The script makes Goddard a simpering, scheming hussy using her feminine wiles on Chaplin to secure the part when she’s not talking like a Valley Girl and giggling. When she finds out Bankhead might have the role, she starts screaming and lunges herself through a doorway like Esmeralda crying out for “sanctuary!” I’m surprised she didn’t crumble the paper up in her hands and shout up at the sky “NOOO!” That’s how hammy her performance is. 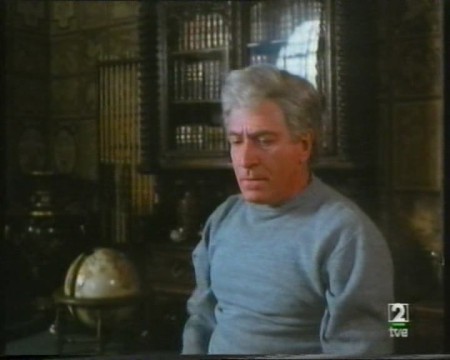 Of course, we all know how the story ends. If you don’t, The Scarlett O’Hara War might give you a good foundation, but it’s just too mired in sitcom conventions that it never feels like a real movie. Much like its subject matter, it plays like it’s auditioning for a full-season pick-up, “see whether Scarlett gets picked…next week!” Curtis tries and there are a few actresses who do okay, and this is FAR from the worst biopic I’ve watched…if that’s saying anything.