Originally published in May of 2012

It always surprises me when I discover films I’ve missed out on; case in point, I’ve officially seen The Lady from Shanghai!  Yes, a seminal classic not just in the world of film noir but in director Orson Welles’ oeuvre!  As with all film noirs, it’s hard to explain just what works about this film.  Maybe it’s the amazing script filled with noir one-liners, or it could be Rita Hayworth who, despite having short blond hair, still looks stunning.  Or it could be the fact that a key scene was filmed in San Francisco in a place I’ve been to a lot.  Either way any fan of film noir, or just good cinema, should seek this out ASAP.

Seaman Michael O’Hara (Welles) is enchanted by the beautiful Elsa Bannister (Hayworth).  After taking a job on her husband Arthur’s (Everett Sloane) yacht, Michael falls for Elsa.  Unfortunately, he becomes enmeshed in a murder for hire plot involving Arthur and his business partner that could put Michael on trial.

This was film is a pretty big flop in Hayworth’s career, or it was at the time.  Many blamed Welles (Hayworth’s then-husband) because he told her to cut and dye her hair and considering this was her next film after finding success in Gilda…it was a risky move to say the least.  Having not seen Gilda yet the move didn’t bother me too much although I don’t think Hayworth made a good blonde but who cares when she plays such a phenomenal femme fatale!  Most fatales are beautiful and cold, the two tenets of any good woman in the genre, but Hayworth combines that with such a personable vibe.  When her and Michael meet for the first time and have their flirtatious moment they’re kindred spirits with an extensive travel history they share.  At a certain point she tells Michael one doesn’t gamble in Shanghai and by the way she says it, with a laugh almost, you can tell she’s a woman whose seen some things that she probably shouldn’t have.

Hayworth may be the cool blonde of the film but there’s something lively about this performance.  She never feels sterile or diabolical like Barbara Stanwyck in Double Indemnity or Jane Greer in Out of the Past.  Hayworth plays Elsa like a woman whose had her fun and is stuck in a situation she can’t get out of, namely her marriage to “the best criminal defense lawyer” Arthur Bannister.  All this and Elsa is still a sexual character like the rest of the femme fatale canon.  When she first asks Michael to work for her she seductively says “I’d like it.”  As the audience is meant to learn, she’s not simply asking for an employee, it’s a proposition!  Even then, there’s a hidden humor in her technique that you don’t see in the other females in this genre. Playing opposite her is the iconic Orson Welles.  I might get lambasted for saying this but Lady from Shanghai is the second Welles film I’ve seen (the other being Jane Eyre).  Yes I know…I’m a fraud (that’s probably why I didn’t get that LAMMY nomination…I’m crying on the inside jk).  Either way Welles definitely continues to cast a large shadow in this film.  His Irish accent takes some getting used to, at times he can sound a bit too much like the Lucky Charms leprechaun but it seemed legit.  Michael is a character who is firmly entrenched in both sides of the law (as must film noir men are).  He has principles and doesn’t want to serve under anyone, yet he’s constantly justifying his actions through voice-over.  When he’s asked by Elsa and Arthur to work for them he says no, and becomes defensive.  Yet he’s not drawn into Elsa’s world, it’s his choice.  He may say “I did not use my head, except to think of her” and blame Elsa, but he’s considering his ability to say no in person, he’s making a choice plain and simple.  When a drunken Arthur comes over Michael says in a roundabout way that he had to take Arthur back himself, “I knew I had to.”  He’s justifying his actions not only to the audience but to himself.  In comparison to other film noir character he seems more aware that he’s lying to himself than most. 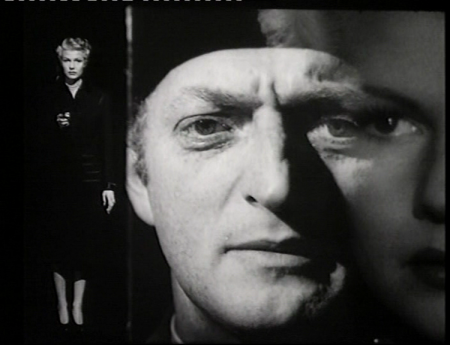 Speaking of Arthur Bannister, have you ever met a character you wanted to see meet his maker more?  Everett Sloane is a perfect jerk in this film.  His features (with no disrespect) are small and rat-like.  When he’s standing next to the tall, bulky Welles, Arthur looks just as weak as people expect.  It doesn’t help matters that Arthur is handicapped and uses crutches.  This is a double-edged sword opening up a world of complexities for the character.  On the one hand, people underestimate him because of how weak he is, and yet he also uses that to gain control of others.  He’s an ass, but he does have a point to his interest in money.  There’s a great scene where he’s telling Michael about how he’s enriched the life of the maid on the yacht.  The maid herself says she needs the money, Arthur pays well, so what’s the problem with him lording over the fact that he controls her?  You truly understand both sides of the argument, despite not wanting to identify with him.  When the murder actually happens and the trial begins there’s an element of farce and logic to how Arthur starts cross-examining himself.  It’s easy to see why he is considered the best criminal defense attorney because he plays the court like a harp showing the spectacle over substance.

The actual mystery is tightly wound and visibly bubbling throughout the movie’s runtime.  Michael is propositioned to murder Arthur’s partner, by the partner himself!  That’s only one in a series of odd double and triple twists that the audience doesn’t seem coming no matter how much you’ll say “I saw it coming.”  Even the characters are peeled back like onions.  Michael prides himself on seeing through Elsa’s supposed facade of being a poor, trapped rich wife yet is that a facade?  Is the facade that she’s trapped, or that she’s seen the world and feels confined?  The ending scene shows Hayworth’s best acting as she lies on the ground pleading for Michael to stay with her because she doesn’t want to die (I won’t say whether she does or not).  She’s pleading for him and your heart breaks because the coldest thing he can do is leave a person to die alone.

The film is just a masterpiece and the funhouse sequence at the end is delightfully surreal.  Welles wanted no music playing to heighten the terror but I believe the scene works just as well with music.  See for yourself:

The yacht the group is on through the beginning of the film was actually Errol Flynn, our 1930s Leading Man Winner!  There’s even a few scenes with an adorable dachshund that was Flynn’s dog!

The best scene has to be the moment between Elsa and Michael at the Steinhart Aquarium in San Francisco!  I got giddy seeing them amongst those darkened fish tanks as I’ve been to the Steinhart numerous times (unfortunately it was razed and rebuilt in 2003 and no longer exists as it did in the movie).  It’s a little piece of San Francisco history right there and it’s shot so beautifully.  To think I stood where Welles and Hayworth once stood!  There’s a great site to look at the various filming locales this movie used in San Francisco.  Check it out here.

If you’re interested in watching The Lady From Shanghai for yourself a YouTube fan has posted the entire movie:

The Lady From Shanghai is a fantastic piece of film noir.  It’s easily top 5 of the genre for me.  Hayworth is simply magnificent and Welles continues to show his flair as a director and actor.  See it now!

The Lady From Shanghai

The Lady from Shanghai

The Lady From Shanghai – Blu-ray