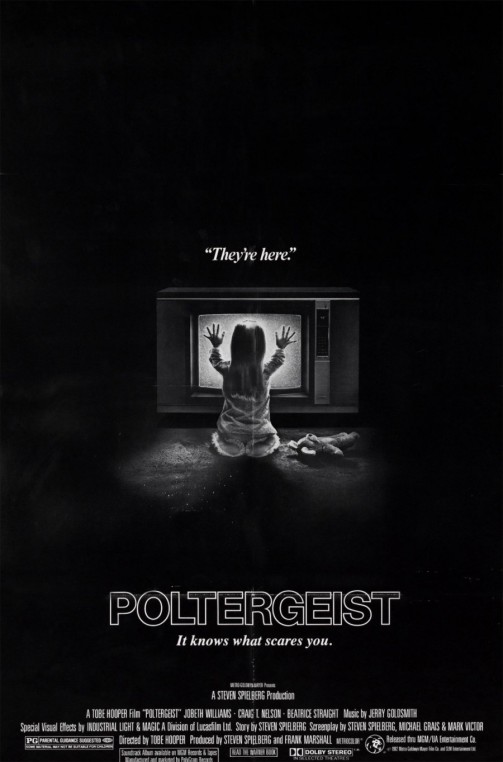 In our continued tribute to haunted houses, none bridges the gap between classic and contemporary quite like Poltergeist. Poltergeist’s 1980s horror combined with Steven Spielberg’s golden era examination of suburban families – with horror as a metaphor for changes and issues – creates a film that could just as easily have been made in 1942. With a cadre of top-notch performances, from both its child actors as well as the adults, Poltergeist can intrigue both classic film fans as well as those looking for more modern horror.

The Freeling family are entirely average, but their house is not. When little Carol Anne (Heather O’Rourke) disappears, the family comes to the unbelievable conclusion that she’s been taken by the house’s ghostly inhabitants.

Poltergeist has so many stories associated with it that if often obscures the forest for the trees. Based, in part, on the 1962 Twilight Zone episode “Little Girl Lost,” the tale of all-American family losing their daughter in another dimension instigates discussion about religion and more all crafted with a nearly Capra-esque bent about the power of the nuclear family. Though credited to director Tobe Hooper (of The Texas Chainsaw Massacre fame) there’s been plenty written about how this was truly Spielberg’s project and there’s far more of Spielberg than Hooper. After making the uplifting E.T. the Extra Terrestrial (1982) Spielberg wanted to explore suburban nightmares, and that’s where the Twilight Zone comes in.

The film opens with the Freelings going about their day, no different from anyone’s. The kids are playing, mom is cleaning the house, and the only bad omen (although they’re unaware of it) is Carol Anne’s bird dies leading to our first discussion between mother and daughter about death. This is probably the only afterlife moment that’s actually darling as Carol Anne creates the perfect afterlife for her bird…before promptly asking for a goldfish once the pet’s six feet under. In a movie where so much suspense is crafted around Carol Anne, Spielberg creates these minor moments that give necessary character development as well as stresses the unity of this family and these characters as individuals.

Unlike most horror films Poltergeist crafts a familial drama where you aren’t left waiting for the fear to build. Without the titled poltergeist, the film works just as well as a family drama about a missing child…that just happens to involve dead people. Once Carol Anne is sucked into the television, the Freelings grapple with her disappearance no different from any parent, albeit with the additional need to call in paranormal investigators as opposed to the police.

Much of the film builds towards all this rather elegantly for a feature clocking in at nearly two hours. The strange occurrences are originally perceived as strange fun or mild inconveniences, no different from their sharing a television signal with the house next door. Diane (JoBeth Williams) finds the chairs stacking themselves up and the weird magnetic pulls as strange and exciting, even sticking a helmet on Carol Anne and watching her sail across the kitchen. There’s an air of the unexplainable, and thus the forbidden and frightening, but it’s not dangerous and therefore fun in its strangeness.

Ronald Reagan had just started his first term in office, and Poltergeist’s all-American nuclear family plays up towards Reagan’s platform of returning America to its traditional values, and there’s no better way of seeing that than in the mother/father, 2.5 children and a dog that is the Freeling family. Their new housing development looks no more unique than the others, and we see that a housing boom has created a need for more space, and that’s where the trouble starts. An American flag and “God Bless America” may be the film’s opening image, but by the end we’re told consumerism ends up being the root of all evil. Carol Anne’s eventual abduction via the TV also ends up being an ironic twist on the metaphorical fear of children’s minds being consumed by television!

Of course, the film’s horror sells things despite the 1982 special effects which, outside of the final climax involving a demon at the children’s bedroom door, aren’t that dated. Spielberg said he borrowed fears from his own childhood, and poor Robbie (Oliver Robins), the neglected middle child of the film series, ends up being assaulted by an ugly tree outside his bedroom room and, the worst fear of all, a clown! The clown terrified me, as I’m sure it did an entire generation of children. The limited effects budget allows for a “less is more mentality,” as we’re left watching the terrified Freelings experience the unseen. Diane’s pull up onto the ceiling is frightening, but it’s preceded by an equally unsettling assault moment of her shirt being lifted up and her legs being opened.

JoBeth Williams grips onto the character of Diane, never letting go. It’s a travesty she wasn’t recognized for this come awards time, because she goes through a litany of emotions that only the most callous audience members can resist. Spielberg is a fan of moms in his movies, and I’d say Diane is the strongest of them all. Not only does she kick off the interest in the paranormal, but she ends up saving Carol Anne (and the day) in the end. Any woman willing to go into a supernatural hellscape for her kids is a saint. I dare anyone to watch the moment she declares an spiritual Carol Anne “went through my soul” and not tear up.

The rest of the cast rocks, but none of them are as spellbinding as Williams. Craig T. Nelson got a bit more of an arc in the sequel – I find the second just as good, if a taste ridiculous – but he’s a commanding presence able to anchor the family. Robins, another character with more in the sequel, is also great as the beleaguered brother constantly set upon by the evil entities as a distraction. However, it’s impossible to not talk about the ones drawn the most towards the supernatural world: Heather O’Rourke as Carol Anne and Zelda Rubinstein as Tangina. The latter has become a horror movie punchline, but she’s so magnetic as the one able to believe in the realm of the dead without hesitation and must convince the Freelings of it. Really, the film doesn’t cement a portrait of the afterlife on the movie, although we’re given glimpses of both the darkness and the life, so Rubinstein gives us as much of a tangible explanation as there can be.

Unfortunately, Poltergeist (and its sequels) are marred by the string of deaths and other bad luck that led to rumors of a “cursed” production. The murder of Dominique Dunne, who plays older sister Dana, snuffed out the candle of a career that was never truly tested. Dana’s a minor character, usually flitting in and out before Carol Anne’s abduction before going off to stay at a friend’s for the majority of the film. Heather O’Rourke’s death at the age of twelve is equally tragic. Beating out Drew Barrymore for the role of Carol Anne, O’Rourke’s long blonde hair and bright eyes certainly proved Spielberg’s reason for casting her; she’s “every mother’s dream.” Carol Anne starts the film as precocious and curious, and although she disappears for much of the subsequent runtime, her voice and presence are always felt.

Poltergeist remains one of the most enduring horror films of all time. Free of slashers, blood and gore, Spielberg and crew create an engaging story about the American family, one that just happens to have ghosts and a portal to the other side in it.