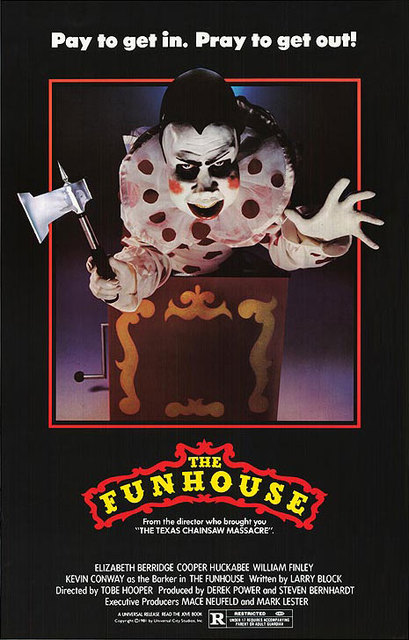 Since I reviewed Tobe Hooper’s Poltergeist (1982) and called it a film not directed by Hooper, why not look at one of his films? Most famously known as the helmer of the gory Texas Chainsaw Massacre (1974), Hooper has directed several off-the-wall films. And since our theme this year is haunted houses, what’s creepier than a funhouse? It’s a house, right? It’s been reported that The Funhouse was what drew Spielberg to putting Hooper in the director’s seat for Poltergeist, and to that I ask….why? The Funhouse definitely feels like a 1980s horror film helmed by the man who directed Texas Chainsaw; it has a deformed villain (maybe?), amateur young ‘uns threatened, a bizarre location (although not an axe-wielding clown despite what the promotional posters depict). I’m still trying to ascertain if all of these elements make a good movie.

Four teenage friends hit up a local carnival in their town. They have the bright idea of staying overnight by hiding in the funhouse. When they witness one of the carnival employees kill a woman they’re trapped with nowhere to go.

The 1980s came to be defined as the era of the slasher. While Psycho (1960) and 1978’s Halloween all gave us knife-wielding villains, the 1980s saw several masked killers terrorizing teens with various reasons for it given including a response against Reagan’s era of family values, the rise of teens and consumerism, etc. The Funhouse plays on both horror’s storied history as well as its sexy future. We start with a character wearing a mask and spying on a showering women through a POV shot in an obvious homage to Halloween. The woman’s soon attacked in a sequence respecting Psycho. All of these tributes come with the requisite shot of skin, proof you’re in an ’80s slasher film. There’s also a heavy connection to Frankenstein – being a poster on young Joey Harper’s (Shawn Carson) wall as well as the mask of the villain.

Speaking of Frankenstein, Hooper must love the character or else he wouldn’t give it two tributes. However, I’m confused as to his intentions with it. Are we meant to sympathize with the villain or not? The 1980s loved playing on deformed children, usually secreted away by abominable parents, and The Funhouse is no different. The character being disfigured and obviously mentally handicapped could have turned him into an object of sympathy not unlike Boris Karloff’s bolt-necked friend. Instead, Hooper turns him into a murderer with sexual desires that are perceived as deviancies, a harsh reminder that the disabled are often presumed to be asexual. Later on, our “heroine, Amy (Elizabeth Berridge) calls him “not even human,” so I can’t root for any of them. Hooper seems to use the name recognition, but apparently didn’t read or watch the product.

Hooper and crew don’t waste time and in 96-minutes there’s an air of things moving slowly yet there’s little that could be added which wouldn’t be deemed filler. Amy and her brother quarrel over the carnival; she leaves with her new boyfriend, Buzz (Cooper Huckabee) and her friends; bad stuff happens.

Because this is Tobe Hooper we’re talking about, his world is composed of our nightmares and a stereotypical time that, at least to me, my mother talked about. Is it a representation of the 1980s? If it is, it’s all the worst things about the era. The carnival, specifically, has all the typical boogeymen figures you’d expect. I’m unsure when these things were done away with, but apparently in 1981 traveling carnivals still had peep shows and animal oddities. (I should be happy they didn’t do full-tilt and have a freak show.) All the carnival workers are the definition of “carny,” and by the midpoint you’re surprised the cops aren’t swarming all over this place, especially in light of the fact two girls were killed in a neighboring town where the carnival visited. Outside of that, Hooper shows nearly every adult as evil or otherwise inefficient. You know it’s the 1980s because Joey sneaks out of the house to visit the carnival on his own and contemplates taking a ride from stranger. Thankfully, this is a world where a strange man, with no provocation whatsoever, whips out a shotgun, scaring the wits out of the kid. And, I remain shocked and disturbed, but are we meant to assume Joey’s been molested by the strange man pawing him who called his parents?

The amount of question marks shows how transparent the script is. The arrival of the teens in the funhouse sets the plot in motion, so why do we need Joey’s story altogether? I waited for him to aid his sister and her friends or, in a frightening twist back on the opening scene, knowingly leaving them to die. Joey, instead, disappears after being rescued, leaving us to wonder why he starts the films and goes on this journey to the carnival simply to leave without resolution.

The teens are all closely aligned with established horror movie stereotypes. You have the big bohunk, the virgin everyone keeps telling to “loosen up,” the jerk and the blonde. None of them are particularly interesting watching on their own, they’re merely meat sacks waiting to be destroyed. Their limited acting talent attests to this. Kevin Conway plays almost all the carnies – at least the male ones not rocking a mask – and he’s sufficiently sleazy.

I kept yelling at the screen, “Burn it down.” None of these characters are good people, even the deformed villain, so why bother. Hooper makes a movie where you’re just content watching people be skewered in ways that aren’t particularly gory or graphic. It feels like punches are pulled too early, as evidenced by movies that would be made later. 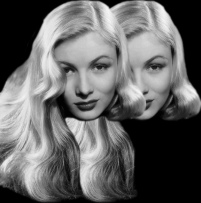