Oh boy.  I really have to control my anger and frustration for today’s review.  In a nutshell, I hated this movie.  Actually hate is a lowly word.  I detested this movie.  I despised this movie.  I know there are fans out there for this film, so let me put this bluntly: I have little nice to say about Annie, so if you love it I advise you not to read this review!  I love Annie as a play.  I enjoy the music.  In fact, I dream of singing “Tomorrow” to a large crowd (in my head).  The 1999 TV version starring Kathy Bates, Victor Garber, and Kristin Chenoweth was the version I grew up on, and I should have reviewed that!  The only reason I reviewed this one in the first place was because I assumed it was a Christmas movie like the 1999 film!  Nope.  Director John Huston couldn’t afford snow, so changed the time to the 4th of July.  Not only did this film piss me off, but its not even 25 Days of Christmas eligible!  So should I tell you exactly why this movie annoyed me to no end?  Read on!

The orphan Annie (Aileen Quinn) gets adopted by the supremely wealthy Oliver Warbucks (Albert Finney) as a means of aiding his image.  As Warbucks and Annie become close, orphanage owner Miss. Hannigan (Carol Burnett) and her nefarious brother Rooster (Tim Curry) scheme to collect a reward for the whereabouts of Annie’s parents.

As mentioned above, I love Annie, especially the 1999 version.  This Annie loses all the charm and warmth of that film in favor of a muddled tone, terrible additional songs, and a runtime that plods on and dies only to keep going for another 40 minutes!  I think a lot of the film’s flaws lie with director John Huston, making his musical film début.  Huston is a great director, but he’s not meant to direct musicals and/or children’s films ever (which is probably why he never directed another musical again).  All the actors seem to be focused on the camera, losing all sense of natural acting ability.  At times I wasn’t sure if I was watching a film, a bad soap opera, or a terrible play.

The worst offender of this is Aileen Quinn as Annie.  I can understand Quinn’s nervousness playing such a big character, but she spends far too much time posing in front of the camera.  One scene of her trying to fight off a group of boys actually has her posing with her little fists up, and pouting.  Is she supposed to be ripping off Shirley Temple?  In other scenes she’s completely unsure of how to integrate stage business (the boring movements to make the acting natural) along with her dialogue.  The first scene has her stroking another girl’s face.  At least that’s what I assumed she was trying to do.  She looked like she was trying to scrub it off.  Several times you catch her trying to look wherever the camera is, and she tries too hard to be precocious and streetwise.  If you want a great example of natural child acting I recommend Paper Moon.  Aileen Quinn is no Tatum O’Neal people.  Her acting shows sporadic bits of emotion, but for the most part she’s simply reliant on being cute.  Note this line of dialogue she’s given: “Have my parents….come for me?”  That pause shouldn’t be there unless she’s out of breath.  Quinn has acted very little since, instead focusing on her education which I applaud her for. 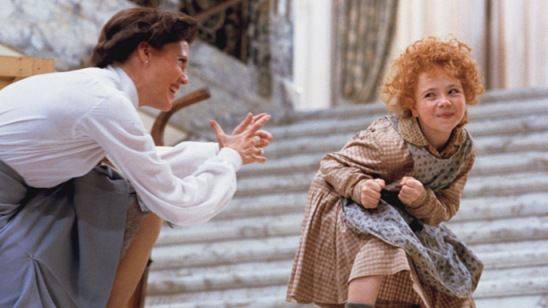 Quinn isn’t the worst part of this film, nor is she the worst actor.  If the acting isn’t boozy, it’s exaggerated and comic.  Actually, a lot of this film is exaggerated and comic.  The film includes a stereotypical “mystical” Indian named Punjab (Geoffrey Holder), who sets off bombs in one scene, and talks in philosophical clichés.  The comic elements feel out-of-place, possibly to entice the family audiences.  Maybe that explains the bomb throwing, and fight scene that happens during a phone call between Warbucks and a business client?  Or what about the divergence to soap opera acting in the scene with Miss. Hannigan, complete with soap opera music?  Not even the choreography is any good in this movie!  Again, none of the moves feel natural.  If they’re not ballet, mostly Reinking’s dancing, they’re bizarre jazz movies or flailing of arms and elbows.  Embarrassingly, some of the child actors only start moving once the camera turns to them, leaving the audience to see them standing there till they get the cue to move!

Well what about the songs you say?  The songs have to be good, right?  Well, the standard Annie songs are great, including “Tomorrow” and “Hard Knock Life.”  The issue is with the way their reprised again and again; including one reiteration of “Tomorrow” with Annie and President Franklin Roosevelt (Edward Herrmann).  Beating a dead horse much?  There’s other songs that are created especially for the movie that are awful, and I can’t imagine why they removed certain songs (such as my personal favorite “N.Y.C”) to add in these awful numbers.  One song is just about going to the movies!  A three-minute song about a place they’re going to.  How about cutting the song, and just showing them at the movies?  The runtime is already padded in this scene by including over three minutes of footage of Greta Garbo in Camille.  Is John Huston trying to get me to watch another movie, because it’s working!  Maybe we need that song to have a weird throwback to Busby Berkeley that also pads the time.  This film is over two hours, and about thirty minutes is unnecessary filler and additional songs.  The songs “We Got Annie” and whatever the name is of the song Hannigan sings while trying to seduce Warbucks are the  worst of the lot.

Sadly, the majority of the actors can’t even sing the songs to their full strength.  The 1999 version has Broadway stars in the major roles, so the singing is phenomenal.  Here, several of the actors “talk-sing” such as Finney and Reinking.  Reinking singing with Quinn in “Gonna Like It Here” is plain bad.  Other times, when you think Quinn is going to go to a higher note she abruptly drops it.  It sounds like she can’t reach it, or is just stopping in the middle of the song.  When Bernadette Peters is finally allowed to sing she’s phenomenal, but Huston lowers the volume on her voice, probably to mask how good she is compared to everyone else.

The adult actors range from boring to really good with nothing in between.  Finney and Reinking are boring as paint drying.  Reinking has never been a good actress in my eyes, and she’s not any better in this then she was in All That Jazz.  Carol Burnett walks away with this film as the boozy Miss. Hannigan.  I’m not quite sure why they wrote her as a slut, but I love her mimicking the girls, and acting hung over.  The ending gives her a heart of gold she never earns, and it really feels like last-minute pandering, but she’s solid throughout.  I also adored Bernadette Peters and Tim Curry as Lily St. Regis and Rooster. They deserved far more screen time then what they ended up with!

I’ll watch the 1999 version again.  I might watch it soon because it’s a Christmas movie, and I need to wash the taste of this out of my mouth.  It should be obvious that I won’t be rewatching the 1982 version ever again.  The acting is bland, the choreography is sloppy, and it goes on far longer than any human should be forced to endure.  Skip it, and enjoy the 1999 version instead! 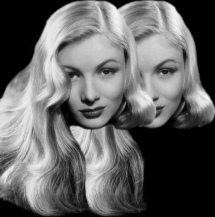 Interested in purchasing today’s film?  If you use the handy link below a small portion will be donated to this site!  Thanks!
Annie (Special Anniversary Edition)