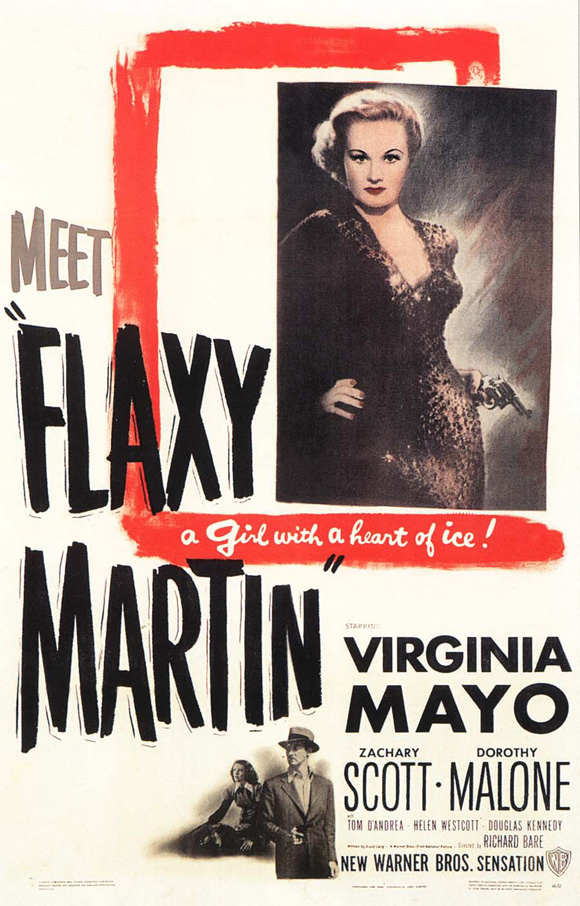 I’ve documented my adventures in bad noir before. With so many ingrained conventions inherent in the genre it’s unsurprising how often directors and screenwriters fall into the habit of giving us one positive for every three negatives; Flaxy Martin suffers from that ratio. Despite a delectably villainous performance by the titled femme fatale, played by Virginia Mayo, the plot is just too silly, and that’s saying something in the often overly sticky world of noir. Zachary Scott again proves he’s more than just a bad boy, but the film feels like two siblings forced to play with each other, ie two different plotlines jammed together in the hopes of finding a coherent whole.

Walter Colby (Scott) is a mob attorney tired of doing the dirty work of others. He’s set to retire alongside his lover, Flaxy Martin (Mayo), who happens to be two-timing Walter with his boss. When Flaxy is involved in murdering a witness, Walter has the bright idea of taking the fall for the crime, certain he’ll be exonerated. What he doesn’t know is that Flaxy is looking to frame Walter, leaving the attorney reverting to the tricks of his trade for help.

By their nature noirs often act as actors showcases and there’s a triumvirate of great performances that try their best to blossom. Zachary Scott, who showed his wolfish villainy in Mildred Pierce (1945) and his paternal strength in Shadow on the Wall (1950) plays a character somewhere in-between. Colby’s the type of mob lawyer you often see portrayed in film, morally opposed to the clients he’s defending, but too happy about the lifestyle to forsake it. His interactions with the various mob goons, one gleefully played by Elisha Cook, Jr., are great and when Scott’s required to become Mr. Noir he inhabits it.

It is difficult understanding the proper reason behind his decision to take the rap for Flaxy. Flaxy coerces a friend to provide an alibi for one of the mob goons, but when the woman backs down on the promise Flaxy has no problem killing her. Now, if Walter’s as good as he says he is, you’d think he’d just defend her and win the case which would have furthered his ambiguity when he realizes Flaxy is just as bad, if not worse, than the men he’s defending. Or, if anything, he could put up a decent defense when he himself is arrested. He lies down dead once he’s arrested, taking the rap by simply admitting his guilt. Considering this is a man who went straight to death row for murdering his wife in Shadow on the Wall, Zachary Scott really needs to stay out of the court system in movies.

Noirs can veer into camp, usually by embracing too many of the tropes which are often dated as time passes. This is probably the most noir-iest example of a the late 1940s-early 1950s noir. Characters may not call women “dames,” but nearly everyone is “baby” or “sweetheart,” and let’s not forget our female character’s name is Flaxy Martin. Blondie Johnson and Torchy Blane were already taken. You can call Walter’s blind devotion to Flaxy love or obsession, but it often comes off as stupidity. Again, the man conjures up no defense for himself and he’s an attorney!

Virginia Mayo relishes playing the evil “tomato,” Flaxy Martin. Her cavalier attitude and smile as she walks up a flight of stairs to lay the hurt on a woman is terrifying. As Flaxy walks out, hearing the woman’s cries, a smile is back on her face. Flaxy is heartlessness hidden in a mink coat! Opposite her is Dorothy Malone as Nora Carson, the good girl who finds Walter. Malone didn’t really hit her stride, career-wise, till the 1950s, and she’s spinning wheels here as Nora. Flaxy casts a big shadow, and Malone is sweet but she’s too sweet to have much impact.

Flaxy Martin works for those who enjoy their noir light on plot and high on personality. Mayo and Scott work well together, and Malone’s always nice to see. 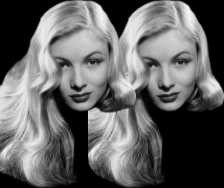