Welcome to the first new series of 2016! The Fridays With… series is meant to spotlight actors/actresses/directors I have little to no familiarity with and traverse the world of some of their most well-regarded films. In honor of the silent comedian’s Centennial (and complements of the company releasing them), we’ll be spending Fridays in January with actor Harold Lloyd! Be sure to check out iTunes where you can rent and purchase 100 Years with Harold Lloyd!

My lack of interest in silent cinema is well-documented, but the glass ceiling broke last year after I watched Colleen Moore in Why Be Good? (1929). Where Moore was a spirited and sprightly ball of fire, Harold Lloyd is the everyman. Unlike Great Stone Face, Buster Keaton, whose characters were put upon on by life, Lloyd created a role audiences could relate to. With his circular frame glasses – with no glass in them – Lloyd’s character embodied the eager all-American boy (even after Lloyd left his boyhood behind) out to find success, no matter what it cost him. The cost usually came at the expense of his body. Much like Keaton, Lloyd was known for his death-defying stunt work, much of which he pulled off without a double!

The Freshman sees Lloyd as university student Harold Lamb, a new student at Tate College. Desperate to become the most popular boy in school, he decides to join the football team. As Harold climbs the ladder of success, a girl (Jobyna Ralston) loves Harold for who he really is.

I was fortunate to watch The Freshman with commentary from Leonard Maltin and two other sources – since this was unplanned I didn’t catch the other commentors alongside Maltin – with the trio providing great context and examination I didn’t immediately pick up. Seeing silent films alone is a vastly different experience from watching with an audience, and as Maltin states, much of the humor comes from hearing others laugh. Thankfully, Maltin and crew’s laughter made up for this. 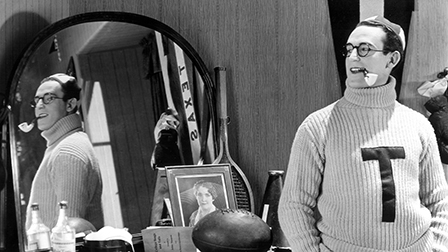 Audiences might be surprised to realize the 1920s wasn’t just the era of “flaming youth” and the Flapper, but also of the college student transitioning from child to adult, moving away from home and shaping their identity. The opening intertitles go so far as to elevate college higher than any government office: “Going to college was greater than going to Congress.”

The Freshman’s view on college highlights the social elements in a safe, idealized way. Despite there being Prohibition, students carrying hip flasks are poked fun at, but drunkenness is never directly intimated. And, probably the most shocking element for this college graduate, is how Harold and crew attend zero classes nor talk of homework; apparently Tate College’s priorities are football….and football. (Oddly enough, I’m currently watching a movie with another trip to Tate – this time Tait – College, Good News [1947]).

Lloyd’s Harold Lamb – I’m assuming his characters all used derivatives of his name? – is a ball of energy, complimented by intertitles just as bouncy and zesty as he is. Eager to be liked, performing a jig every time he’s introduced to people, which itself becomes a problem when exhaustion or other antics set in, it is this friendliness that makes Harold stick out like a jigging sore thumb, leaving the bullies to spot him a mile away (then again, how can these guys be bullies when they’re wearing beanies?). Because Harold is so innocent and eager to please, and because Lloyd is such a good actor, you immediately root for Harold’s success. He’s a man so perfect he saves kittens, for crying out loud! This man shouldn’t be seeking college popularity, he should be deified!

Harold, Ralston’s Peggy, and many of the other characters, all feel like fully formed individuals with motivations and personalities. The bullies may be stock characters, but even the coach (Pat Harmon), who doesn’t want Harold on the team, sympathizes with him. And every character has a history and past we’re only given hints at, emphasizing that life doesn’t begin or end purely when the film does; we’re capturing a moment in time.

For her part, Jobyna Ralston could have easily been an idealized, Pickford-esque heroine, complete with giant Pickford curls and an intertitle describing her like “your mother.” Her romantic interludes with Harold are relaxed and natural, romantic in how unaffected they are.

An absence of dialogue allow you a chance to watch how the tools of filmmaking are employed. Character reveals – like Peggy standing behind Harold, only seen after he wipes a mirror – are sly introductions, while gags like an awkwardly placed dummy’s leg in front of Harold’s, provide their own hilarity in the visual. Carl Davis’ score is as peppy and earnest as our lead, with sequences reminiscent of Hello, Dolly’s “Out There.”

Of course the film is a football movie, with Lloyd filming the climactic game sequence during the 1924 Rose Bowl. Though not a football fan myself, I was entertained throughout the third act due to its culmination of Harold’s determination. Will he finally get the opportunity to prove himself, and cement his popularity, by coming in at the clinch during the big game? If you’ve watched any movie ever you’ll know the answer. And, really, the film isn’t necessarily about that as the final scene sees the lover’s declaring their adoration in a way as sweet and poignant as you’d expect.

I didn’t go into the dinner party sequence – complete with Harold being left in tatters by the end – and that’s because The Freshman deserves to be enjoyed. This is a great first foray into the world of Harold Lloyd, or of silent cinema in general. We’re off to a great beginning!