I’ve had my ups and downs with Harold Lloyd’s body of work over the last four weeks. Although none of his previous features outright bored me, I didn’t find the belly laughs or narrative drive outside of The Freshman (1925). But, we’re ending on a high note with Why Worry?, a film about enjoying life’s adventures, and a cautionary tale against traveling outside the United States!

Harold Van Pelham (Lloyd) is a massive hypochondriac traveling to the small village of Paradiso for a rest. Along for the ride is his nurse (Jobyna Ralston) who fosters a crush on him, and his valet (Wallace Howe). But it turns out Paradiso isn’t quite living up to its name, in the midst of a revolution which threatens to stop Harold’s heart.

Our final Lloyd film sees the bespectacled everyman playing something different – a character you don’t immediately identify with. His wealthy Harold Van Pelham treats his nurse and valet like the hired help they are, constantly giving him pills every two minutes as, he fears, his heart will be overexerted without them. As someone with a healthy dose of hypochondria herself, Harold’s constant fears of impending doom are funny in and of themselves, especially when paired with Lloyd’s terrified facial expressions as he constantly checks his pulse and heart rate.

As the scared young man placed in circumstances which test his mettle, there’s no one better than Lloyd whose everyman persona has seen him court popularity and success. Here, he’s already garnered monetary success and seeks a sedentary life with people waiting on and endlessly coddling him. The only one willing to challenge him is his beleaguered and beloved nurse. Much like Ralston’s character in The Freshman, The Nurse is another idealized heroine whose inner goodness and perfection may not be noticed by Harold, but certainly is by those in the audience.

Lloyd wanted someone completely opposite from his newly married wife, Mildred (heroine of Safety Last!), and both Ralston and the character are a complete 360 from previous Lloyd heroines, even Ralston’s portrayal in The Freshman. Yes, The Nurse is another perfect specimen of woman – so sweet she’d make your teeth rot – but her character has an inner feistiness. When the group makes it to Paradiso and the ensuing revolution, The Nurse ends up on her own, forced to rely on the kindess (and wardrobe) of strangers. Dressed up as a Spanish boy – itself a coup….a woman in pants! – The Nurse has no problem jumping and attacking the head of the warlords. The final action piece sees her becoming the typical damsel in distress, housed on a balcony no less, but she’s more than a nurturing figure for Harold. He falls in love with her inability to take his constant anxieties. “Why Worry” isn’t just a question about enjoying life and not worrying about the uncontrollable, but also opening up to love.

I’d also say there are more sequences showing the sparks between Ralston and Lloyd. Maybe because Ralston does more than stand behind a counter and smile there are some wonderfully heartfelt moments between her and Lloyd. On the boat, when The Nurse falls into Harold’s lap, a mixture of fear (fear of falling in love?), intrigue, and attraction cross his face. Harold, who, up till then, has touched his chest or only allowed The Nurse to take his wrist, musters up the strength to pat her on the arm and he visibly lights up, immediately followed by a hilarious sequence of him dumping her on the floor; it’s darling in its brevity. Later on, when the two are reunited in Paradiso, their back and forth is a perfect love/hate relationship leading to Harold’s discovery that he can muster up the courage to save his lady love when things get tough. 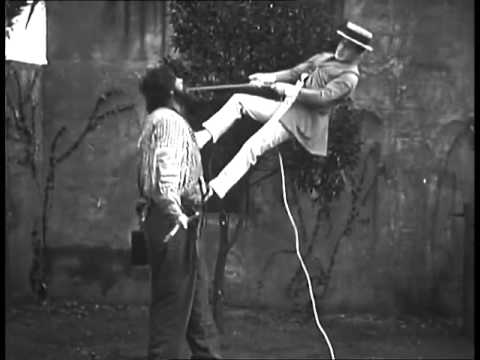 While The Freshman’s gags were funny in their situational context, the gags and set pieces here are hilarious due to their execution and Lloyd’s acting. This was one of the first times I laughed without the aid of commentary because A) the situations are outlandishly comical and B) Lloyd’s acting is top-notch. Though not for the squeamish, watching him pull out the tooth of the city’s “wild man” (John Aasen) gives you spasms of pain coupled with laughter (much of it relieved) at Harold’s failed attempts to tie the tooth to a galloping horse.

Harold’s partnership with Colosso may have a bit of a “boy and his dog” (or, giant, in this case) to it, they’re a great comedic duo. Aasen’s a silent version of Andre the Giant, and he spends much of the screentime ripping things apart – including Lloyd in a balcony! – and helping Harold find his lady love.

The one concession one has to make with Why Worry? is the depiction of Latin people. Paradiso is touted as this magical place of rest and relaxation, where even the mule takes a nap in the middle of the day, but it’s mired in government corruption and poverty. The intertitles never commit to a specific country, but the wide sombreros and general swarthiness of the characters gives off a Mexican vibe that’s very stereotypical. The entire film hinges on white savior Lloyd coming in and, accidentally, liberating the town. Again, the time period makes things somewhat acceptable, but it is noticeable.

Overall, Why Worry? ended us on a grand note of mirth and humor. Lloyd and Ralston have never been better, the story was hilarious and engaging, and the jokes transcend the absence of sound.