Known for his ability to corral big casts and create low-budget films efficiently, director Norman Taurog’s brand of can-do sentimentality saw him create enduring works like The Adventures of Tom Sawyer (1938), Presenting Lily Mars (1943), and The Canterville Ghost (1944). He was also one of the revolving door directors to work on The Wizard of Oz (1939). One of the films he probably isn’t remembered for is The Hoodlum Saint, a take on The Roaring Twenties (1939) without any of the grit or hardscrabble attitude, probably due to its leading man, William Powell.

Terry O’Neill (Powell) has returned from the war to discover he no longer has a job. Cynical by the lack of prospects he starts climbing up the corporate ladder, no matter who it hurts.

Like The Roaring Twenties did regarding World War I veterans’ cynicism of returning home to a lack of jobs The Hoodlum Saint follows a similar, albeit far from criminal, route. Terry O’Neill is fresh off the boat from Europe with no family outside of those working for his old newspaper. He soon discovers there’s nothing for him there and becomes hardened to an unforgiving world that doesn’t appreciate its servicemen.

Unlike The Roaring Twenties there’s never any trauma for Terry, before or after his return. For Cagney in The Roaring Twenties you watch him try to avoid returning to his world of crime and trying to make good – the war’s affected him and he’s beaten down further, despite being one of the brave America doesn’t seem to be the land of the free he once believed in.

Powell’s flippancy and ability to breeze through situations with a witty rejoinder leaves him unaffected by anything. He seemingly sailed through the war bearing no residual wounds of the physical or mental variety; he never hits rock bottom and thus his drive for power plays more like a personality trait he had prior to the war as opposed to something imposed on him by it. And the film plays on reminding the audience of Terry’s goodness. He may be stepping on friends and employers but he still saves a nickel for the collection box.

The faith-based message of the film, involving Saint Dismus or “The Hoodlum Saint,” aids in redeeming Terry for his greed, but Terry comes off as little more than a mustachioed George Bailey, with characters’ honesty or dishonesty dictated by Terry’s corresponding goodness or badness. None of this is surprising for a film released after the horrors of WWII; it’s all just severely underdeveloped. By the time Terry’s woman scorned, Dusty (Angela Lansbury), creates a means of ruining Terry’s life, there’s little logic left to derive. She’s little more than a Gloria Grahame copycat. The message soon becomes literal, with cynicism and, more importantly, atheism, quite literally sucking the life out of Terry.

Terry decides to “play the game,” climbing up the social ladder and there’s little playing to be done. In a world where Terry can’t retain his job at a newspaper all it takes is shaking hands with the right person at a party for Terry to become executive vice president of a large bank. The benefits of being free, male, and 21 (or thereabouts), apparently. It’s interesting comparing this to similar tales of upward mobility like Baby Face (1933). A man plays corporate America, succeeding at everything he does with only a few minor stumbles, while a woman has to be domesticated or suffer a fate worse than death. For Terry, his scheming yields little punishment; it isn’t until he loses his faith that bad things start happening.

I have no major issues with the cast although Powell’s too clean-cut for this role. It’s obvious they went with Powell for his smooth talking abilities, but it also leaves the character too clean-cut. Someone with rougher edges, like a Cagney, would have suited the role better. Esther Williams gets a rare opportunity to work outside of a swimming pool as Terry’s wealthy lady-love, Kay. Williams proves herself as an actress, first and foremost, and as much as I love her aquatic acrobatics, I wish she was offered more chances to create a character. The weakest of the group – at least having in terms of having little reason for being there – is Angela Lansbury as the girl from the wrong side of the tracks, Dusty. Much like Terry, Dusty is meant to be a girl of low means and Lansbury, gussied up in beautiful gowns, is too elegant.

The Hoodlum Saint is a bit of a lame duck. Does it want to be a searing indictment of capitalism? A tale of redemption and faith? In the end it never commits to either element despite the presence of a rather sturdy cast. 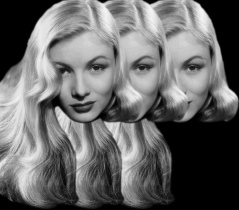