An unwitting franchise of sorts, the Support Your Local… series acts as simultaneous send-up and loving tribute to the dying Western. Released just three months before Sam Peckinpah shot the Western in the face with The Wild Bunch, Support Your Local Sheriff lampoons the genre’s tropes and fallacies, creates a genuinely entertaining story that never sets out to make fun of the genre it’s ribbing, and brings awareness to the discontent of the times. Three years later its follow-up (not sequel), Support Your Local Gunfighter, tried duplicating the success of the original but ends up removing much of what made the first foray so fun.

Each film pays tribute to a particular Western. Support Your Local Sheriff sends-up Rio Bravo (1959), though I found connections to Dodge City (1939) with its town of lawlessness tenuously anchored by wealthy fat cats more interested in the railroad and gold mining. Symbolizing its transition away from the classic Westerns of the studio system, Support Your Local Gunfighter is a combination of Akira Kurosawa’s Yojimbo (1961) and Sergio Leone’s A Fistful of Dollars (1964). The town of Purgatory, where Local Gunfighter takes place, immediately draws comparisons – and a mirror image – of the group in Stagecoach (1939) heading to Lordsburg.

Both movies utilize their predecessors as a means of creating a universe both primitive and waiting for culture. When Garner’s Jake McCullough steps into town in Local Sheriff he sees people brawling in the mud confirming the town’s primitivism. McCullough is a smooth-talking man of law and order with more than a passing resemblance to Henry Fonda’s Wyatt Earp in My Darling Clementine (1946). His deadpan honesty creates a reluctant hero the townsfolk are utterly confused by. It helps said townsfolk aren’t especially bright, like Bruce Dern’s Joe Danby, a man easily buying Jason’s story about blood on the jailhouse floor in order to keep him in a jail cell with no bars.

William Bowers’ script for Support Your Local Sheriff is filled with side-splitting lines inhabiting the Old West field and calling out the genre. Jason takes up the tin star of the last sheriff, dented while stopping a bullet. Instead of inspiring confidence in the power of the law, the mayor reveals the rest of the bullets shot at the sheriff did him in. The town’s dirty dealings are evident, but there’s no bones about these people’s aims. The opening scene at a funeral has the hilariously droll Harry Morgan giving a eulogy to a man he didn’t really know nor did he particularly care about him, and he has no qualms exclaiming “get this coffin out of the way” when they find gold in them there grave! 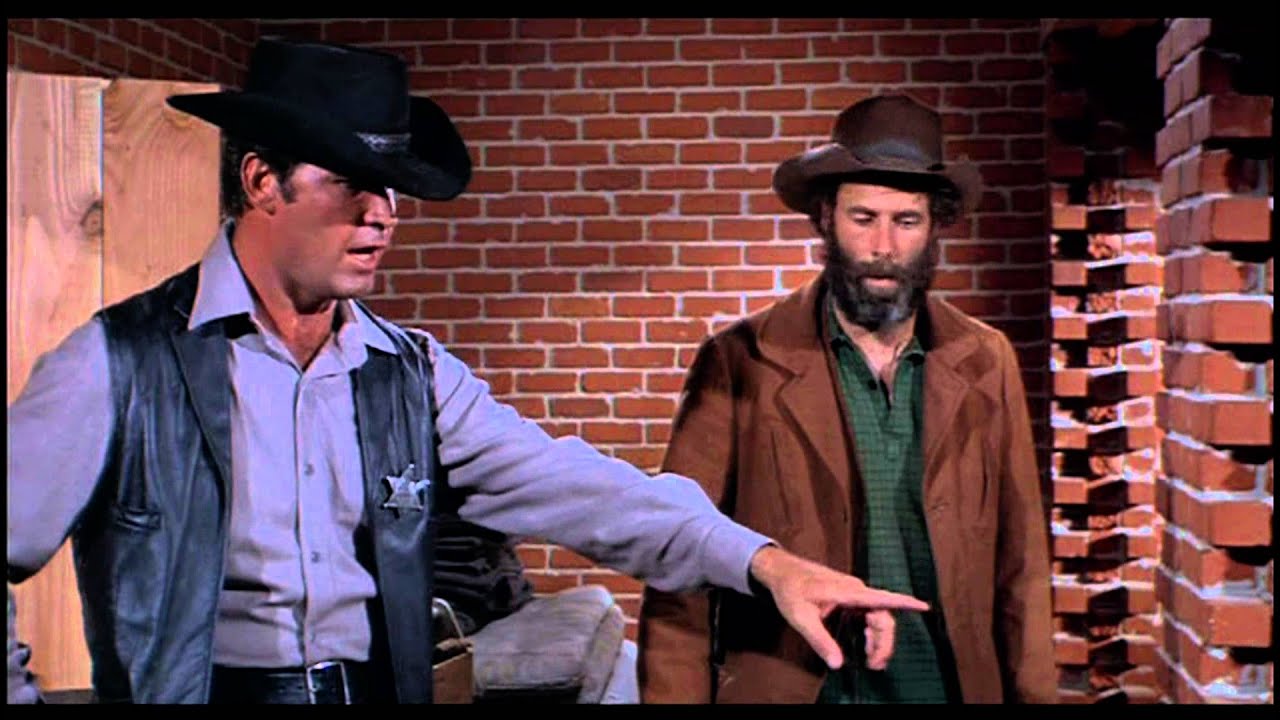 The title, coming from a popular bumper sticker at the time calling for support of local police the likes of Richard Nixon, Ronald Reagan and George Wallace were aiming towards, Jason McCullough is an honest man in a lawless town content to lie by reverse psychology; a small blot of red paint on the jailhouse floor is enough to convince outlaws he’s not one to be trifled with. Director Burt Kennedy and crew send up the law and order movement of the late-1960s with a town of lawless buffoons who are little more than children waiting to be swatted on the rump. Political culture and film genre converge, creating a movie both idealistic and satirical, a West tamed and conquered if not rife with problems through its own colonization.

My love for James Garner knows no bounds and he sails through Support Your Local Sheriff on the effortless guile of his character, Jason McCullough. A nomad filled with hot air and dreams of “going to Australia,” the town he stumbles into is little more than a way station for him to pick up some quick money – a wily entrepreneur with a heart of gold and a moral compass, if you will. “Town character” Jack Elam steals scenes as McCullough’s reluctant deputy, more afraid of being killed than anyone else

One of the more overt references to the changing mores of women as Women’s Liberation gripped the nation is the female characters added agency. Joan Hackett dazzles as Prudy, the young woman unafraid to pound on a guy with a plank of wood and who openly praises Jason for being attractive, but refuses to sink into a puddle “when he smiles.” When the townsfolk turns against fighting to protect their town from the Danbys, Prudy arrives at a council meeting with a shotgun, ready to scare them into submission.

It’s almost a shame Local Gunfighter replaces Hackett with Suzanne Pleshette’s Patience – same name, slightly different character. Obviously more glamorous than Hackett – lip gloss, eye shadow, and hair products abound in Purgatory – Pleshette does fine but too often she’s a punchline stemming from her love for shooting things she can’t hit. Prudy was lampooned, but it wasn’t through details men incorrectly assume about women. Prudy’s fails are things women can relate to, exaggerated – wet hair when a good-looking man arrives, being so hot and bothered you’re literally set on fire. Local Gunfighter gives Patience nothing but a dream of going to a charm school, and the tedious jokes about her lack of shooting finesse playing like the beginning of a joke about “Women drivers….amirite?”

Possibly aided by the rise of Women’s Lib, Support Your Local Gunfighter’s humor veers towards mean-spirited than in Local Sheriff. Despite James Garner’s charm Latigo Smith is the exact opposite of the forthright Jason. Latigo’s motivations are ill-defined and he only boasts two identifiers – being a poor gambler and swindling older women. Marie Windsor, at 52 looking no different than she did in The Narrow Margin (1952), plays Jason’s first jilted lover, Goldie; Joan Blondell plays Miss Jenny, Latigo’s Purgatory paramour. Their performances are minor, but the entire reason for them being in the film provides a dash classic Hollywood panache and humor about being older and their seduction by Latigo’s interest in them. It’s hard rooting for Latigo when he revels in being a cad and no one minds.

The rest of Support Your Local Gunfighter is loud and farcical without nothing else, acting like a sitcom with a multitude of storylines. Nearly every character has an additional plot: Patience’s father wooing the Colonel’s old maid sister, the arrival of the real gunslinger (Chuck Connors in two scenes at the climax), etc. With such a jam-packed “episode,” it’s no surprise the 91-minutes are painfully pulled out. And the actual arrival of the gunfighter happens in the final 20 minutes with a wacky resolution Local Sheriff would have rolled its eyes at – although, I did chuckle at Chuck Connors’ panicked face as he cries “I shot myself.” 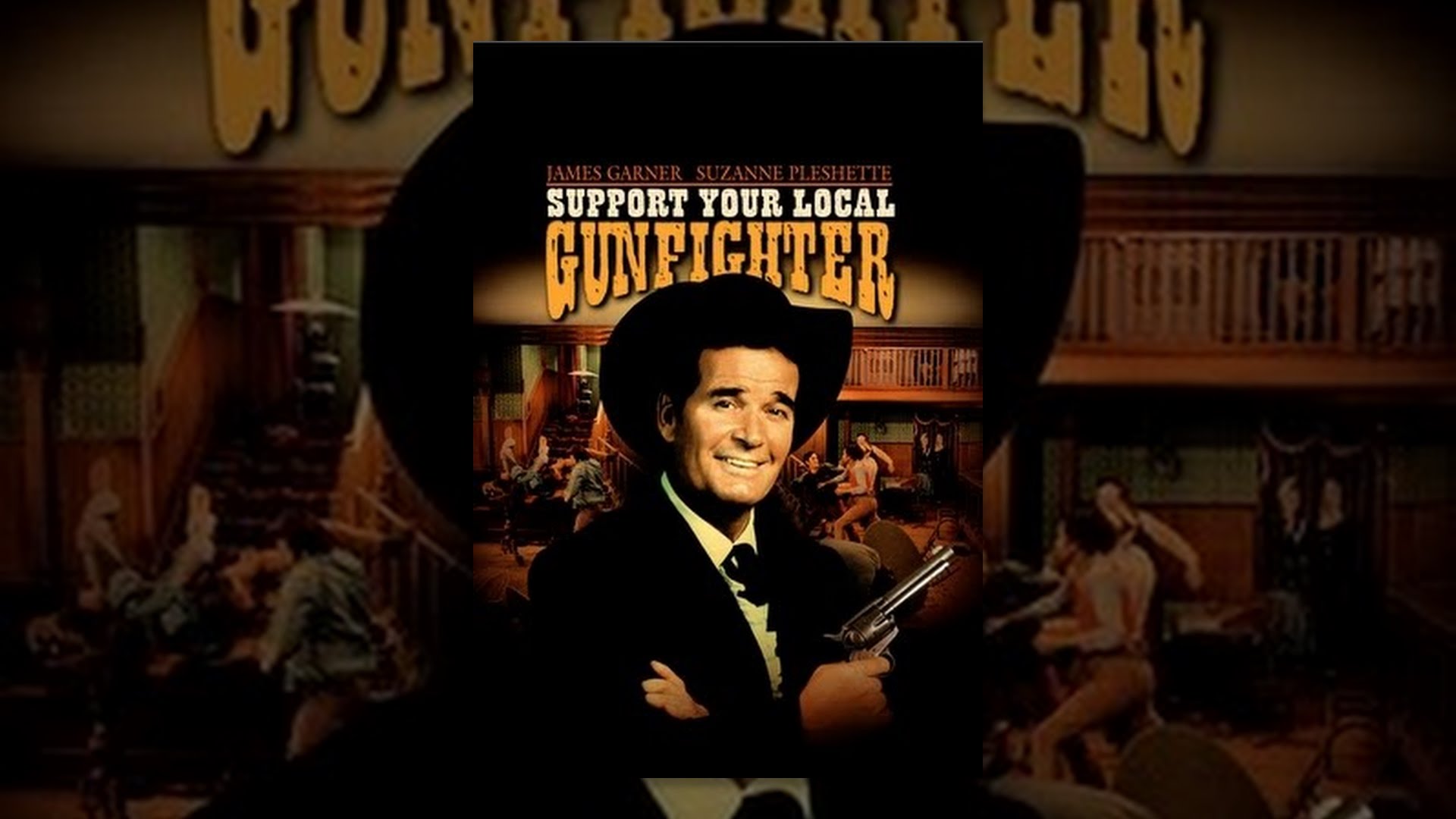 The two films, in unison, provide a lot of fun, but Support Your Local Sheriff is far superior than its television-esque cousin. James Garner and his rogue’s gallery of characters create a fun world. You’ll appreciate both the world they’ve created and the world they’re hearkening back to. Twilight Time’s Blu-ray release contains both films in one, as well as isolated scores, a fun audio commentary and theatrical trailers.