The TCM Classic Film Festival left me behind on my Fridays With… series. The crop of Taylor films this month aren’t his best, but they’re a start.

We kick off this dive into the career of Robert Taylor with his first leading role. Movies are critiqued today if they’re inconsistent in tone or plot, but only in the films of the studio era could you have a wild ride like Times Square Lady, a romantic – comedy? drama? – that diverges down the musical path with an overarching noirish vibe, a cake of delicious possibilities whose individual pieces are better than the end result.

Toni Bradley (Virginia Bruce) is the daughter of a recently deceased crime boss. Steve Gordon (Taylor) is tasked with wooing Bradley into signing her properties back to the individual crooks who work out of them, but this honey is smarter than she looks!

Prolific director George B. Seitz, best known for directing serious drama and the Andy Hardy series, crafts a film that you’d conceivably think could bridge the gap between those two concepts. Toni Bradley is the Iowan fish out of water who comes to the big, bad city and establishes herself. Times Square Lady maybe known for giving Taylor his license to act, but it’s really a starring vehicle for genre queen Virginia Bruce. Between this and Bruce’s role in the equally entertaining Invisible Woman (1940), Bruce perfects her persona as a brash, sarcastic woman of elegance. Unlike her more brassy counterpart, Glenda Farrell, Bruce doesn’t compromise and is littered with quips, yet retains a haughtiness that’s never condescending.

Toni’s triumphs are rather minor in the grand scheme of things. Her arrival precipitates a sea change, a control, of the vice in the city. The delightful menacing, if refined, Henry Kolker plays the true brains behind the operation, Mr. Fielding. He wants Toni to sell her buildings which will go to the big mob bosses. In a scant 68-minutes the film wanders away from this narrative time and again to show Toni enjoying the city, and doing good. 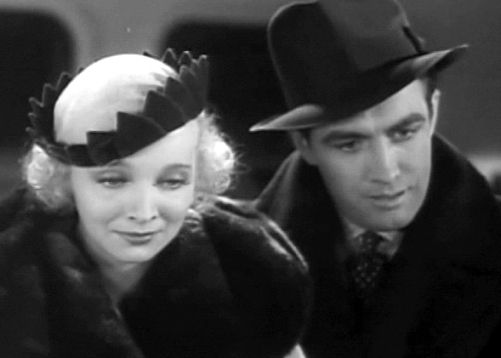 For instance, she takes on sassy maid, Babe (Isabel Jewell) as her personal assistant, saving Babe from a life of scrimping and complying to unfair bosses. Later on Toni gives novice singer Pinky Tomlin (playing himself) a chance at the big time. Babe tells Toni “it can’t be Christmas for everybody; it’s still September,” but Toni wants to give everyone their Christmas chance, acting like a modern-day angel. As for Jewell, she’s appeared in Gone With the Wind (1939), The Leopard Man and The Seventh Victim (both 1943) and I have no recollection of her! I thought her spunky sweetness was darling and I’m interested in watching her in more.

So with Bruce walking away with the film where does that leave poor Bob? Taylor’s Steve Gordon is the “good looking Charlie” tasked with swindling Toni with his dashing good looks and, boy, are they good! Taylor’s definitely got charm to spare, and the camera loves him which helps him stand out, even if he completely disappears from the narrative by the third act.

I’d much rather watch him than Pinky Tomlin, who probably should have received second billing for how prominent a role he has. Tomlin’s “hick canary” character spends most of his time singing…singing on-stage….singing while trying to woo Toni…singing while milking a cow. He sings a lot, you guys! And all the songs sound the same! I started wishing the mob up and beat Pinky with a hockey stick, if only to keep him quiet!

Though Robert Taylor plays little more than eye candy – isn’t that refreshing? – Times Square Lady is a fun, if totally disassembled, piece of fluff. Virginia Bruce and Isabel Jewell are fantastic, and Taylor makes the most of his role. If only there wasn’t so much Pinky Tomlin!