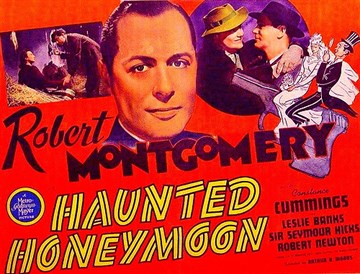 This weekend looks at two takes on the post-matrimonial comedy. Based on the novel and play by Dorothy L. Sayers, Busman’s Honeymoon, Haunted Honeymoon suffered before a single cell of film was shot. Originally meant to star British thespian Robert Donat, the advent of World War II saw the film shelved before being filmed and release in 1940, at the height of the war. It just missed the heyday of screwball comedy and that could explain why Haunted Honeymoon feels like a stage-bound parody of 1930s detective novels with William Powell nowhere to be found. Barely a honeymoon with zero haunts to show for it!

Lord Peter Wimsey (Robert Montgomery) is a detective married to a true-crime writer, Harriet (Constance Cummings). The two have hung up their respective fedoras for good and invest in fixing up Harriet’s childhood home. Unfortunately they arrive right as the town is taken over by a murder investigation of a local man holding quite a bit of money. 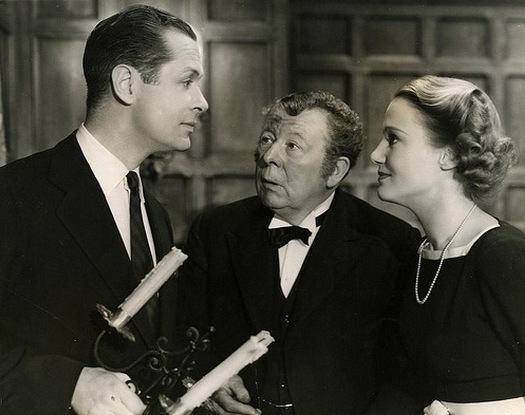 Immediately other detective stories are wafting in your brain: the former detective and his crime-obsessed wife copies quite liberally from the works of The Thin Man (1934) or The Ex-Mrs. Bradford (1936). This is excellent material worth mimicking, but it does leave Haunted Honeymoon with few tricks up its sleeve. Peter isn’t particularly lord-like for carrying the title, and really it’s a callback to another series. Despite the war going on Peter and Harriet are affluent and able to hang up their handcuffs to purchase a small estate.

With a title like “Haunted Honeymoon,” it’s odd how little time is spent with our couple. They’re obviously successful individuals who talk about giving us investigation crime…and they mean it. Unlike The Thin Man there’s no evidence the two characters are lying about their lust for bloody murders and sussing out a criminal, no matter what Harriet says about crime being akin to giving up dope. Abruptly things move to the small town where the actual murder takes place. A cast of characters ripped straight from Central Casting are introduced in a murder mystery even Agatha Christie would be bored by. Cummings and Montgomery do get some of the jokes right. Their attempts to pack are undone by an investigator sitting on every thing, typical fast-talking screwball antics.

Peter and Harriet’s return can’t come soon enough, but the actual mystery recedes into the background as the film plays “let’s lampoon the locals.” Harriet and Peter don’t understand the mechanics of the town, turn their nose up at at the thought of parsnip wine and generally look like rude rich people. Taking into account the war, these moments feel discordant, as if the film sat on a shelf for a few years. Why would these two be surprised by the locals when their house isn’t exactly a palace – a fact that seems more a budget limitation than a narrative element. Really there’s nothing haunted about said honeymoon, but I guess “murderous honeymoon” implies the two turning on each other.

Robert Montgomery and Constance Cummings are left playing dopplegangers of William Powell and Myrna Loy. Even though Cummings’ Harriet is a successful writer, the two aren’t set up as a team, per se. Robert Montgomery’s Lord Peter is fine, though there’s never any explanation as to why he’s an American with an English title (apparently no one erased that after Donat left). He’s florid when he’s doing the third-act solving of the mystery, but otherwise he grins and bears it. Cumming has less to do. The local inhabitants are all fun in that Cockney, Una O’Connor way of imitating things. 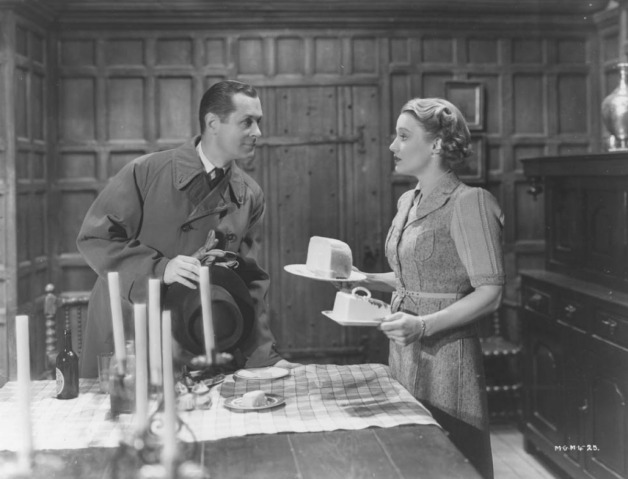 Suffice to say Haunted Honeymoon offers little in the way of frights, thrills, or fun. The plot and character development is added on to another story of a murder that, though lacking in anything unique, could have worked on its own. As it is the addition of Lord Peter and Harriet confuses and gets stuck halfway through. By the time the two do go off on their honeymoon – yeah, technically this isn’t their honeymoon – you’re happy to see them leave. 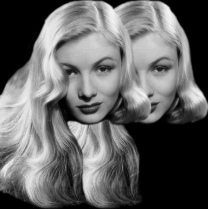