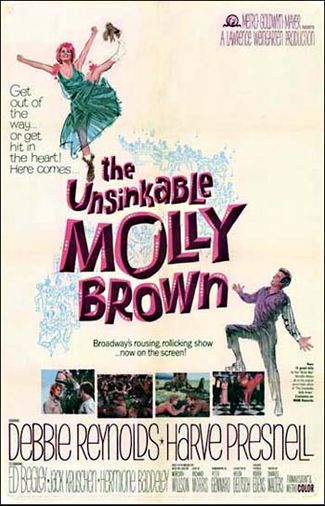 Entering the world of classic film is a sad endeavor as the knowledge looms large that people you love have been dead for years or will eventually pass. I knew my return to the Fridays With… series would involve a deceased celebrity; I had no idea it would be the incomparable Debbie Reynolds. In comparison to Bette Davis or Barbara Stanwyck Reynolds lacks the hard-hitting canon of films, but her filmwork was always charming with a light touch, a dash of music and a smile. In her only Academy Award-nominated performance Reynolds plays a character as larger than life as she was, the “unsinkable” Margaret Brown.

Poor, uneducated Margaret Tobin (Reynolds) has dreams of marrying a millionaire and learning to read. When she meets Johnny J. Brown (Harve Presnell) the two quickly marry and set out to make themselves society darlings.

Bearing comedic timing and a wholesome personality it’s understandable why Debbie Reynolds was cast over Tammy Grimes, who’d personified Margaret Brown on Broadway. Reynolds played average young ladies, so the assumption is she’d be more than capable dropping a rung lower to play a mountain girl who transitions into a socialite. It’s also safe to assume most only knew of “Molly” Brown – a name lyricist Meredith Wilson and book writer Richard Morris came up with because it sounded better than Brown’s nickname of Maggie – through her passage on the Titanic. Wilson and Morris attempt to go beyond that story by focusing on her relationship with husband J.J., a route the film also follows.

I can’t comment on the play but the film’s portrayal of Margaret’s desire to marry rich and learn to read leave her an uninteresting character, famous for being famous. Reynolds playing Brown is the perfect pairing of personality and character. After starting out as America’s sweetheart Reynolds became America’s jilted wife, and much of her career success came through working in numerous mediums, on-stage and screen. Reynolds replaced Shirley MacLaine and I doubt the latter actress could overcome the narrative’s inherent issues, though she might have performed the character less broadly. Reynolds is at her best when she’s herself and she loses herself in a character that’s larger than life. This grandiosity manifests in lines spoken through gritted teeth, screeching and hollering, and generally acting like she’s in an episode of The Beverly Hillbillies. It’s a performance similar to Natalie Wood’s in Inside Daisy Clover (1965). Whether the belief is that poor people tend to be aggressively loud it fails regardless.

Molly Brown as a character may not work, but Debbie Reynolds’ performance gains steam as she leaves the safety of her home and moves to Denver. Molly’s given two primary goals: marry wealth and learn to read, and it is the latter goal that yields the benefits. Once Molly learns to read, coupled with her advantageous and mutually attractive marriage, she becomes a social climber. Reynolds works best when she’s at odds with snootiness, and when Molly seeks the respect of the old-moneyed class her scrappiness has an outlet. Reynolds establishes her blend of class with a snide turn-of-phrase that’s fun to watch. Her energetic dancing, particularly once her society friends show up is high-stepping fun.

Brown’s life was remarkable, and not for her travels on the Titanic – which are attached to the end for about seven minutes of screentime. It’s disheartening to know Brown’s life according to Hollywood boils down to a good marriage and wealth…and for telling women to shut up on the Titanic (untrue). The real Brown was an outspoken activist for a multitude of causes including women’s and worker’s rights. She founded the juvenile justice system, worked with WWI soldiers, was awarded the French Legion of Honor and ran for U.S. Senate twice! Where’s all that in the film? Playing Brown’s husband is Harve Presnell, a holdover from the Broadway show. Presnell’s performance mimics the work of Howard Keel; both have a deep bass voice with an operatic range and are adept at playing strapping outdoorsmen. For Presnell this vocal bombast is at odds with Reynolds’ higher, lighter work. There’s no vocal consistency to the songs, a consistency also missing in regards to time. Are the events here comprising several years (safe to assume) or just a few months?

The Unsinkable Molly Brown gives Reynolds an earthier persona still mired in her celebrity, so it’s understandable why she garnered a nomination for it. However, like many bloated road-show musicals of the ’60s, this one gets wrapped up in the wrong things. Margaret Brown’s life was depicted too early and could be adapted today with more details into what made her so unsinkable.

One thought on “Fridays With…Debbie Reynolds: The Unsinkable Molly Brown (1964)” Leave a comment ›