Though it gave Debbie Reynolds her greatest performance to date, Singin’ in the Rain (1952) wasn’t a monster hit upon release and the quality of the films she made in its wake weren’t of the same caliber. Susan Slept Here tests Reynolds star power. That along with the small budget made the film a financial success for RKO – though it didn’t prevent owner Howard Hughes from selling the studio right after. Directed by Frank Tashlin, the purveyor of some of cinema’s weirder star-driven efforts, Susan Slept Here’s bizarre subtext and stars lay the foundation for a great Christmas comedy in spite of its creeptastic premise.

Mark Christopher (Dick Powell) is an Oscar-winning screenwriter lacking the inspiration to repeat his success. When a juvenile delinquent named Susan (Reynolds) lands in his lap on Christmas Eve, he takes pity on the girl and lets her stay. But when the cops come back to haul Susan to the clink, Mark decides to marry the girl till she’s 18, causing trouble in more ways than one.

The title implies this is Susan’s story but you wouldn’t know it from the opening where an actual Oscar statuette narrates and presents a brief rundown of the Academy Awards. Is this a Hollywood story about the perils of fame? Outside of the narration, which returns once more in the middle, and the shocking moment where Susan uses it as a nutcracker, we never return to the statue. Safe to say someone either had an Oscar lying around and/or just wanted to hold one? This is as close to the Oscars as the film got – it was nominated in the music categories in ’55 but didn’t win. Really it serves as a means of introducing Mark’s character. He’s won the award, but can’t land on a story that will yield him another. Surprisingly (and presenting a bit of fresh air) Mark Christopher isn’t an engaging character. Everything we know about him is in the story conflict provided. This muted quality could be due to Dick Powell, who retired from the screen after this. At 50 years old he looks ten years older. If you thought Humphrey Bogart was too old to pitch woo to Audrey Hepburn in Sabrina (1954), he looks like a baby compared to Powell.  Powell is funny, especially when he’s trying to bond with Susan over the “old” movies he wrote. She doesn’t know who any of the actors are and later catches him reciting the dialogue he wrote, hilariously devolving into tears.

Powell’s absence of personality or complexity leaves more time for the real reason to watch: Reynolds. Like her role in The Unsinkable Molly Brown (1964), we’re introduced to Reynolds’ Susan growling and screaming. Two police officers have arrested her and essentially kidnapped her, handcuffing her to the steering wheel so she can’t escape. They tell the screenwriter they’ve brought the 17-year-old Susan as “research” for a proposed story he wants to do on juvenile delinquents. With callbacks to real stars like Jane Russell and real films like Stella Dallas (1937) maybe Mark is the screenwriter of Rebel Without a Cause (1955). Shared universe, anyone? It’s no surprise Susan is upset. Did I mention she’s been kidnapped and dumped in the house of a strange man? Akin to Remember the Night (1940) she’s left with Mark to avoid spending Christmas in jail. This was sweet for two adults like Barbara Stanwyck and Fred MacMurray, but Susan wants out, stat! The cops ominously tell Mark not to lay a hand on her, and that’d be more than enough for me to run from the apartment.

My only prior experience with Frank Tashlin’s film work is the awful Bachelor Flat (1962) and he’s got a type. Bachelor Flat recycles many of Susan Slept Here’s beats: the May/December romance between a successful older man who ends up with a young girl in his house, albeit Bachelor Flat knew the age difference wouldn’t work and brings in a younger paramour for the girl to end up with. The film’s humor derives from people assuming Mark is a pedophile. Susan answers the phone when his girlfriend Isabella (Anne Francis, with a face that demands Technicolor) calls and tells her they spent all night “playing games……card games.” A newspaper article after the couple weds reiterates that Susan is a child bride. The audience knows Reynolds is older (she was just 22 when this was released, 28 years younger than Powell) and the jokes are funny because they’re cringe-worthy. The closest comparison to this is Cary Grant and Shirley Temple’s relationship in The Bachelor and the Bobby Soxer (1947). Grant’s attempts to be young yielded humor – and audiences today are mystified that a plot like that was used for a comedy. However this plays as a straightforward romance. Powell and Reynolds have little chemistry even after they’re married. A third-act pregnancy scare only leaves you wondering if the film will end with Powell being the one headed to the slammer!

Reynolds’ Susan plays like a continuation of another Temple film, Kathleen (1941). Susan is a little girl playing dress-up who feigns transition from girl to woman. She’s too clean-cut to receive delinquent credibility. Natalie Wood’s Judy would call her a poser. Since the actress tended to lean towards the virginal and the sexless she’s fine in the chaste romance with Powell. The more interesting premise is Susan’s antagonistic relationship with the sophisticated Isabella. Anne Francis was just two years older than Reynolds, but a decade older in terms of class and elegance. Susan tries imitating Isabella’s poses and looks but lacks the allure (and the decolletage) to pull it off. The two have such fun verbal sparring, particularly once they finally meet and Isabella is thrown out on her rear – manhandled, once again, by the same cops who absconded with Susan. A pantomime musical sequence pits the canary in a cage, Susan, against the villainous spider-woman, Isabella for a delicious bit of camp that shows off the film’s color palette and Michael Woulfe’s phenomenal wardrobe. Anything Francis wears in this is sheer perfection! 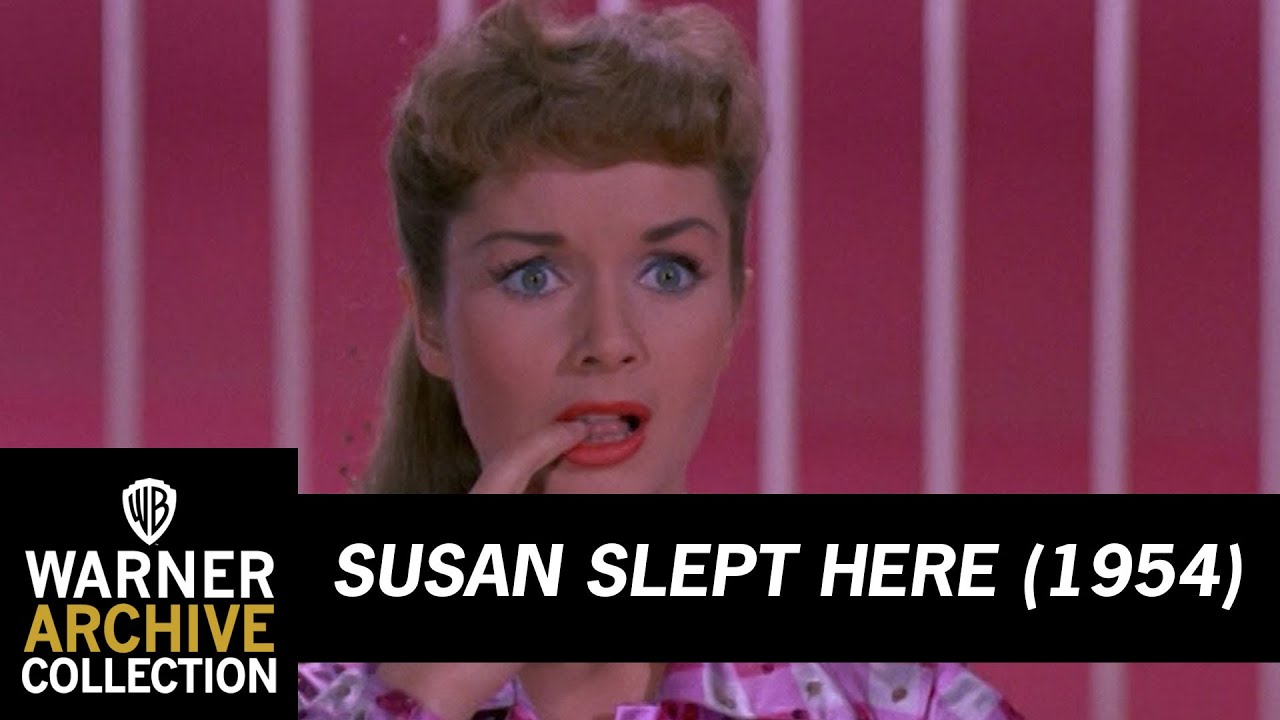 Outside of Powell, Glenda Farrell also transitions away from her studio success into older character parts. As Mark’s snappy secretary Maude she’s a lovable drunk who gives Susan the courage she needs to stick with the marriage. (Red Skelton also has an unexpected cameo.) Alvy Moore aka “discount David Wayne” plays Mark’s self-professed “right hand, Guy Friday,” Virgil. Virgil’s interesting because there’s a wealth of gay subtext in his relationship with Mark. The two seemingly live together; Virgil has no problem walking into the bathroom while Mark showers and, later, Mark gets out of the shower with Virgil in the room. Virgil’s jealousy of Susan seems misplaced considering Mark is the one who suggests marrying her. At one point Susan even questions why Virgil’s around. When the (heterosexual) couple get back together in the end, Virgil passes the torch to Susan, telling her to take care of him. The scenes are so overt that it’s hard to believe screenwriter Alex Gottlieb didn’t intentionally plan it that way. Unlike other movies it’s hard to ignore in a movie already filled with kookiness.

I doubt Susan Slept Here would ever be greenlit for a remake today without significant changes. Debbie Reynolds and Anne Francis are so amazing, the movie is a candy-coated wonder and the plot is just crazy enough to work.