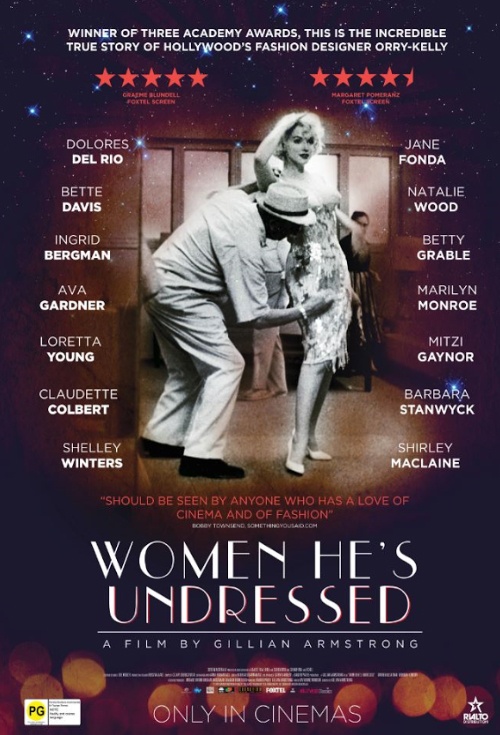 ZZ Top once sang “Every girl’s crazy ’bout a sharp-dressed man.” Costume designer Orry-Kelly was Hollywood’s most sharp-dressed man, whose techniques swathed several legendary leading ladies in their best finery. Women He’s Undressed, premiering at the Toronto International Film Festival this week, is a fascinating documentary by Gillian Armstrong, presenting Kelly as a tailor of many threads: renowned costume of the silver screen (with three Academy Awards to prove it), a small-town Australian boy made good, and a homosexual man trying to make it in an industry which demanded discretion. Interviewing costume designers of today, many influenced by Kelly’s work, and celebrities he worked with, Women He’s Undressed will enchant fans of classic cinema and its costume designs. It’s certainly the best dressed documentary of the year!

“He called himself a hem-stitcher,” the first phrase uttered in Women He’s Undressed proves Orry-Kelly sold himself short. Elegant, seductive, brash. All of these are words better used to describe Kelly’s costume designs throughout the years. Nominated four times during his career and winning three awards, Kelly’s designs set the standard for the decades he worked, as well as placing Hollywood on the map of being at the forefront of fashion.

Starting in the 1930s, Kelly’s work turned the already scandalous world of pre-Code cinema into a hotbed of sin with his slinky, clingy gowns, often with backs exposed, worn by the likes of Kay Francis and Dolores Del Rio. Becoming Bette Davis’ regular designer was a coup; he took her somewhat dumpy frame – not helped by Davis’ antipathy towards brassieres – and turned her into a charming women of glamour, even inventing a bra to go with those Bette Davis eyes!

Today’s Hollywood clothiers such as Catherine Martin, Colleen Atwood, and Kym Barrett discuss Kelly’s influence on their own work. In fact, the female names in costume design are rather refreshing to see in a cinematic landscape where women continue to be marginalized. There’s also interviews with costume designers of the studio era like Ann Roth, a kick in the pants whose dry wit is funny if only because I’d assume Armstrong would be terrified of her. Roth questions everything, from Armstrong’s reason for creating the documentary in the first place – because they’re both Australian, Roth presumes – to saying the right people know Kelly’s name; “You say no one knows who he is. Who doesn’t know who he is?” There’s also amazing interviews with stars Kelly dressed, such as Angela Lansbury and the amazing Jane Fonda. I’ll just ask, is there any other movie out this year that has Jane Fonda confess a desire to motorboat Marilyn Monroe in an Orry-Kelly gown? I don’t think so!

Armstrong takes the concept of Kelly’s identity a step further with a film technique that doesn’t always yield expected dividends. Part of the documentary is made up of actors playing Kelly, his family and famous Hollywood friends, reading notes and book excerpts throughout. This is an idea that’s been done in other celebrity documentaries such as the 2012 doc, Love, Marilyn, but the actors there weren’t donning the mantle of other characters nor were there outright reenactments.

Darren Gilshenan plays Kelly who’s presented as putting on a one-man show of sorts, rowing a rowboat in the afterlife. Since Kelly isn’t actually shown in photos or footage until the final reels, Gilshenan becomes synonomous with the role, making Kelly his own. And he’s certainly cheeky playing Kelly. However, the technique becomes a crutch during the first few scenes as it establishes itself. Moments are acted out rather pointedly, like Kelly getting into a fracas with police leaving him rowing in circles, both literally and metaphorically. When the actors are just off-screen voices reading it’s unobtrusive, and Armstrong seems to realize this as the theatrical moments are reserved for the first half of the film. It’s a shaky start leading to a more confident tone once Kelly is established in Hollywood. Suffice it to say this works better when it’s a straightforward documentary.

Outside of Kelly as designer the film examines Kelly’s personal life as a homosexual in the studio era. Several famous cases of openly gay actors are mentioned, particularly silent star William Haines who, when talkies took over, was forced out of Hollywood for refusing to date women. Other costume designers, like the famous Adrian, married women and lived false lives of domesticity. Kelly refused to date, and because he was so beloved the studios allowed him to be who he was, so long as he didn’t flaunt it. (Similar lifestyles were enacted by other stars and directors like Charles Walters, director of Summer Stock.)

Kelly’s personal life is where the film gets interesting, if lacking the revelations for deep-seated classic film fanatics. The film opens mentioning of Kelly’s “secret,” and the man he refused to talk about. I assumed this would be a revelation no one had ever heard before, instead most classic film fans will immediately realize the man from the minute he’s mentioned by name, his original name that is – Archie Leach. Yes, much of Kelly’s presumed hang-ups stemmed from his failed relationship with actor Cary Grant, and the divergent paths they took upon entering Hollywood.

The revelation won’t surprise classic film aficionados. Grant’s sexuality has been well discussed and apparently was an open secret. Much of the film concerns itself with Grant’s multiple marriages and relationship with Randolph Scott, as well as his rejection of Kelly. The two didn’t speak for decades, and many Hollywood heavyweights who were gay, specifically director George Cukor, refused to invite Grant out because of his perceived phoniness. Grant doesn’t come out positively, but it’s an unspoken assumption that his career would have ended in its tracks had he come out. Kelly and Grant’s story, by far the deepest element of the documentary, is bittersweet and comes to a rather poignant end. In fact, this just proves that my idea of a Grant/Scott biopic isn’t that crazy!

Women He’s Undressed doesn’t always succeed, especially when it utilizes the burdensome technique of character reenactments, but when it settles into telling us about the man, especially through those who knew him, it’s a melancholy character study. The fashions are exquisite and immortal for a reason, and we wouldn’t have them without Kelly. Kelly himself is laid bare for us, but for as personal as it gets, it’s always in fashion! 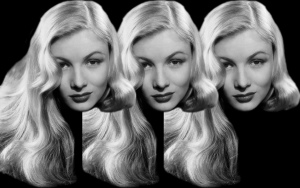