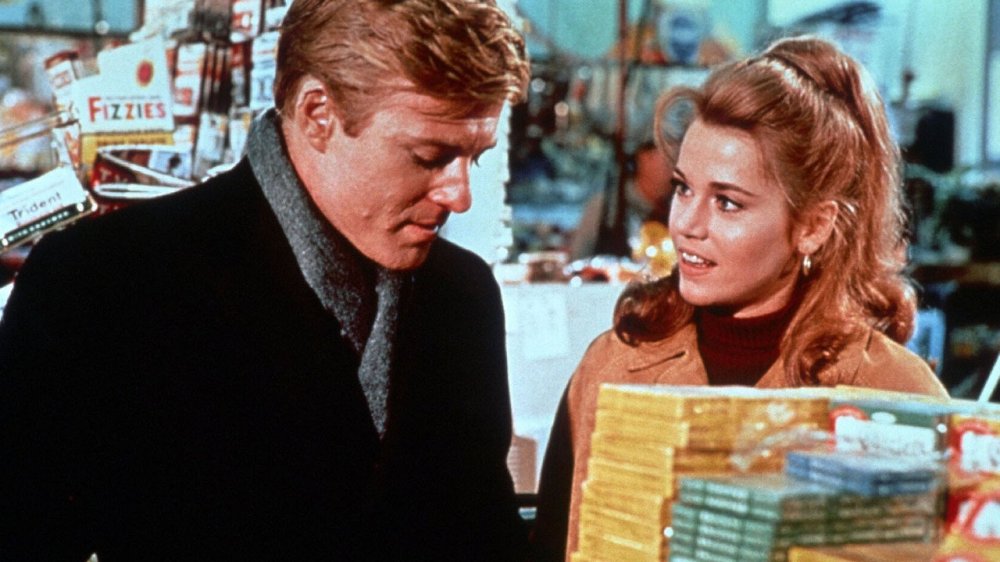 They don’t make romantic comedies like they used. Or maybe Hollywood just realized there’s no way to top the work of the great Neil Simon. Playwright Simon took the adage “opposites attract” and ran with it to create the fun and sexy rom-com Barefoot in the Park. From the Great White Way to the silver screen, Simon’s adaptation of his stageplay sizzles off the screen. Barefoot in the Park is a close cousin to another New York story starring Jane Fonda, Sunday in New York (1963), though where that film heaped on the chicanery to sky-high levels, Simon’s story is grounded closer to reality (though the chicanery is present and accounted for).

Corie and Paul (Fonda and Robert Redford) are newlyweds who have just bought their first apartment in New York. Unfortunately, said apartment is a fifth-floor walkup with a host of problems and wacky neighbors. Can the young couple’s love survive a lack of heating, air and an older Lothario (Charles Boyer) who lusts after the bride?

Barefoot in the Park eschews the typical high-concept hijinks of most romantic comedies to look at what happens after “happily ever after.” Released in 1967, this was perfectly situated alongside other socially relevant romance films like Guess Who’s Coming to Dinner and The Graduate. But where those two films gave us couples discussing the lack of sex (Guess Who) or weren’t exactly going about it the right way (Graduate), there’s no denying this married couple is getting down. What’s more unique is that Corie is the instigator of their friskiness, goosing Paul in the elevator and chronically flaunting her lingerie in a way that doesn’t present her as a sexual object for anyone but her husband. The honeymoon is so successful that Paul looks physically drained and Corie romantically declares, “if the honeymoon doesn’t work out, let’s kill each other.”

This was the second film Fonda and Redford starred in together (their first was 1966’s The Chase) and they’d reteam three more times, the third set for release this year. Their chemistry is so hot that I’d almost believe they were truly in love with each other. They anticipate each other’s reactions in a way akin to the work of Myrna Loy and William Powell. Fonda’s Corie hangs off Paul, as if she’s laying claim to man she believes is out of her league. His love for her is subtler, more protective and restrained. Redford wasn’t a fan of his WASP-y, buttoned-down character but good gravy does he sell it! There’s something about Robert Redford rocking a long coat that delights me and this movie has that in spades. Paul is a workaholic, rebuffing his gyrating, scantily clad wife, but there’s a comedic core to the character that Redford succeeds in presenting. I’d never consider the actor as a comedic performer, but his dry humor works to present a character who knows he’s too serious and is desperate to change that by marrying a free-spirit like Corie. Paul’s angry declaration that he punched an old woman while drunk is hilarious because he thinks it’s a story that proves his ability to have fun, wherein the humor is found in his frustration. Outside of dropping in on Corie and Paul’s honeymoon and a trip to the front of the building, Barefoot in the Park retains the stageplay’s solo location. In a move similar to Mr. Blanding’s Builds His Dream House (1948), Corie and Paul learn about the woes of being a first-time homeowner with an apartment that requires a few home improvements. The walk up five flights of stairs is treacherous in itself but add in no heat/air and a hole through the skylight…when it rains it pours, or, in this case, snows. Much of the film’s humor comes from watching Corie and Paul argue in a house where the walls are already closing in on them. Their bedroom barely has enough space for their bed, leaving them to lie stacked on each other. When Paul’s annexed into the living room after an argument, a fresh snow through the skylight gives him a cold. The house is, quite literally, killing them!

As if the building itself doesn’t present a litany of issues, the neighbors are just as colorful. An androgynous couple cements this as inhabiting the “wacky” counterculture that would dominate the next decade, but the character developed the most is Charles Boyer’s Victor Velasco. Boyer plays up his French lover persona as a lowly city dweller who takes a shine to Corie and her exuberance. As sexy as it is watching young love blossom, the stronger storyline involves Velasco and Corie’s mother, Ethel (Mildred Natwick) getting a second chance at romance with each other. Velasco is a ’60s version of a hipster with his penchant for weird, overly involved food. Coupled with the cynical, overly paranoid Ethel, the two are comedic gold! Natwick, in particular, delivers every line like a grandma would – “If the hardware store was open I’d buy a knife and kill myself.” She doesn’t say it with a wink and a nod, or in a depressive, Eeyore way, but matter-of-fact.

Barefoot in the Park is remarkable, romantic, and funny. It’s a film that looks at love’s many forms – young, old, spouses, friends, mother and daughter – and presents them in a way that’s real while retaining the comic momentum needed for a plot.